Want to avoid an early grave? Try 30 minutes of squats every week: Study claims just half-an-hour of muscle-strengthening activities may cut risk of premature death by up to 20%

Just half-an-hour of squats each week could stave off an early death, research now  suggests.

Japanese experts reviewed over a dozen studies which delved into whether muscle-building exercises had any effect on mortality.

Results showed doing between 30-60 minutes of muscle-strengthening activity per week lowered the risk of dying by up to 20 per cent.

Such muscle-building activities can include squats, push-ups and sit-ups, as well as digging and shovelling in the garden.

Tohoku University experts say the benefits are even greater when looking specifically at at the risk of death from heart disease, diabetes, and cancer.

However, the authors said there was ‘no conclusive evidence’ that going beyond an hour of muscle-strengthening activity reduced the risk any further.

But they said combining muscle strengthening and cardio exercise may increase the protective benefit. 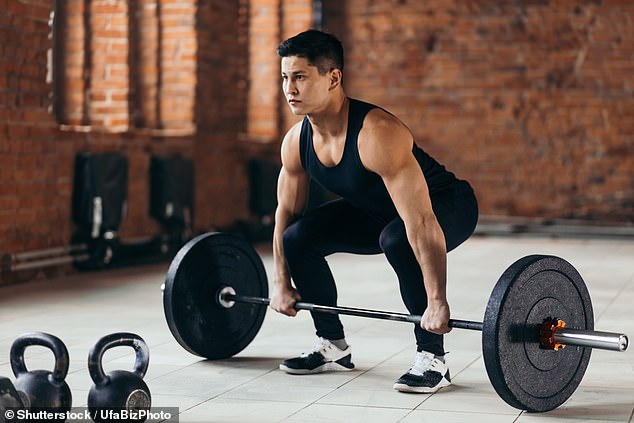 Staying fit into middle age can reduce the risk of developing Alzheimer’s disease by up to a third, a study suggests.

Even small gains in heart and lung health can be hugely beneficial.

Analysis of 649,605 people with an average age of 61 found the most fit were 33 per cent less likely to develop the disease than the least fit.

Study author Dr Edward Zamrini, from Washington VA Medical Center, US, said it was ‘exciting’ and ‘very promising’ to see case rates decrease with increased fitness levels, as there are currently ‘no adequate treatments’ for Alzheimer’s.

He said: ‘One exciting finding of this study is that as people’s fitness improved, their risk of Alzheimer’s disease decreased-it was not an all-or-nothing proposition.

‘So people can work toward making incremental changes and improvements in their physical fitness and hopefully that will be associated with a related decrease in their risk of Alzheimer’s years later.’

He added: ‘The idea that you can reduce your risk for Alzheimer’s disease by simply increasing your activity is very promising, especially since there are no adequate treatments to prevent or stop the progression of the disease.

‘We hope to develop a simple scale that can be individualised so people can see the benefits that even incremental improvements in fitness can deliver.’

Researchers examined participants’ ‘cardiorespiratory fitness’, a measure of how well the body transports oxygen to the muscles, and how well they are able to absorb oxygen during exercise.

A limitation of the study was participants were mostly white men so results may not be generalisable to other populations.

The findings will be presented at the American Academy of Neurology’s, the world’s largest association of neurologists and neuroscience professionals, 74th Annual Meeting in Seattle.

Brits are already encouraged to undertake muscle strengthening activity as part of a regular exercise regime.

The NHS recommends people do muscle-strengthening activities two days a week, in addition to 150 minutes of moderate aerobic activity, like brisk walking.

Previous research has indicated muscle strengthening was associated with lower death risk — the team of Japanese experts wanted to find out what the potential ‘optimal dose’ might be.

In order to do so, the experts reviewed 16 studies on the potential life-extending benefits of muscle strengthening.

All of the academic papers followed adults with no prior major health issues for at least two years.

Most of the studies were from the US, with the remainder from the UK, Australia, and Japan.

All of the studies also accounted for aerobic or other types of physical activity the participants were doing, as well as muscle strengthening activity.

Analysis of the data showed adults who did at least 30 minutes a week had between a 10-20 per cent lower risk of death over the study time-frame.

However, no risk reduction was found for some specific types of cancer including bowel cancer and kidney cancer, as well as cancer of the bladder or pancreas.

When looking at deaths related to diabetes, muscle strengthening activity up to an hour per week was found to largely reduce the risk of death. But the benefits started to taper off after the 60-minute mark.

The authors also highlighted the benefits were greatest when muscle strengthening was combined with 150 minutes a week of aerobic exercise.

The results were published in the British Journal of Sports Medicine.

‘The combination of muscle strengthening and aerobic activities may provide a greater benefit for reducing all-cause, cardiovascular disease, and total cancer mortality,’ he said.

However, Dr Momma added that the current data is limited and further studies on more diverse populations than the ones the team analysed were needed to increase the certainty of the evidence.

The diversity of the data was one of the limitations in the analysis that the authors acknowledged.

Of the 16 studies only a few of each were applicable to each of the causes of death analysed in the review, meaning the findings should be treated with caution.

Secondly, the authors also acknowledged the studies were based on participants self-reporting their exercise levels which could be unreliable.

Lastly, the authors also highlighted that the majority of the studies were from US meaning the findings may not be as applicable to other populations.

The researchers acknowledge certain limitations to their findings, the main one of which was that data from only a few studies were pooled for each of the outcomes studied. The included studies also relied on subjective assessment of muscle strengthening activities.

HOW MUCH EXERCISE YOU NEED?

To stay healthy, adults aged 19 to 64 should try to be active daily and should do:

A good rule is that 1 minute of vigorous activity provides the same health benefits as 2 minutes of moderate activity.

One way to do your recommended 150 minutes of weekly physical activity is to do 30 minutes on 5 days every week.

All adults should also break up long periods of sitting with light activity.