Like most people with deadlines and Wi-Fi, I have a fraught relationship with my email inbox. I have to make a real effort not to check emails on weekends, and after 6pm on week nights. I also struggle
to delete old messages.

Email never used to be this vexing. Before it became our prime method of workplace communication, it was a novel repository of Hotmail accounts and updates from friends and relatives, not a digital slave-driver. 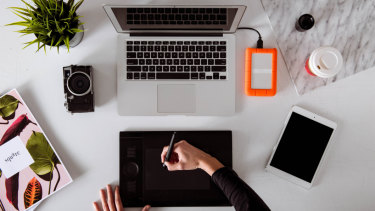 “There are few jobs that require you to be contactable 24/7. So work with email switched off.”Credit:Stocksy

Digital wellbeing and productivity researcher Dr Kristy Goodwin says email overload is a serious problem. “These days, some 84 per cent of Australians keep their inbox open in the background while working, which is just staggering,” says Goodwin. “This prevents you from engaging in deep, productive work.”

Furthermore, Goodwin argues that if you’re regularly responding to emails on weekends or after hours, then you’re sacrificing your wellbeing – and potentially your relationships – to other people’s time frames.

A 2018 US study, “Killing Me Softly: Electronic Communications Monitoring and Employee and Spouse Well-Being”, published in the Academy of Management Journal, concluded that company expectations to be constantly “on”, and the mere possibility of a text or phone call after hours, were having a deleterious effect on workers’ health and even their personal relationships.

Business owner Nathan Schokker couldn’t agree more. He started Talio, a Brisbane commercial-property services business, six years ago, and in the early days was glued to his email mornings, evenings and weekends.

These days, however, he encourages his 30 staff to engage in face-to-face communication and phone calls with clients. Staff are also discouraged from sending emails on weekends or after hours. “Email is a never-ending pile of work and it often leads to breaking point for people,” says Schokker.

“We actively try to eliminate emails as much as possible. We visit clients in person and we get up, walk across the room and talk to each other. It dramatically improves stress levels when you are connecting with real people rather than sending emails.”

Of course, email is not entirely avoidable, and Goodwin recommends managing the imposition by building highly fortified boundaries around your time. “There are very few jobs that require you to be contactable 24/7,” she says. “So choose your most productive periods of the day and work with your email switched off entirely.”

Goodwin suggests choosing a handful of occasions to check your email each day, and putting a time limit on the session. “Schedule windows of time when you’re less productive to do the more shallow
work of dealing with emails. I try to do a 45-minute email session three times a day; less if I can.”

If will power is your weak point, there are online programs, such as Freedom, that will temporarily block your access to email websites.

You may also think you are being productive by replying to incoming messages at lightning speed (guilty), but the opposite is true. “We need extended downtime in order to be productive, but we’re checking emails from the womb to the tomb,” says Goodwin.

Seriously, people are literally looking at emails while their partner is in labour and checking them at funerals.”

But what to do with my endless build-up of undeleted emails? Many of those gathering e-dust in my inbox are not personal, heartfelt missives, either. Instead, there are a lot of dull instructions about where to meet friends (beside a big monument) and what to bring to a barbecue (nothing).

Goodwin suggests I take a leaf out of organisational guru Marie Kondo’s book and delete what I no longer need. “Do a clean sweep, a delete and re-boot, while archiving the emails you need,” she says. “It’s like declaring email bankruptcy. It reduces the cognitive load of such a full inbox.”
It’s sound advice. After talking with Goodwin, I hit “Select all” on all the party invites and group emails, and drag them satisfyingly into the trash.

This article appears in Sunday Life magazine within the Sun-Herald and the Sunday Age on sale October 13.