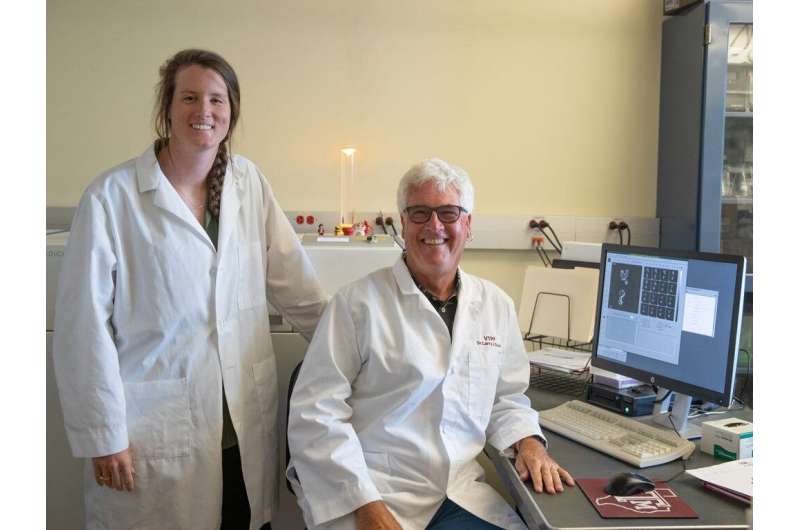 New research from the Texas A&M School of Veterinary Medicine & Biomedical Sciences (VMBS) is the first to provide direct experimental evidence that people with Down syndrome may not heal from bone fractures.

The study, recently published in Bone and led by Kirby Sherman, a Ph.D. candidate in the VMBS’ Department of Veterinary Physiology & Pharmacology (VTPP), not only illuminates a previously unknown issue but also highlights a need for doctors to better address the issue of fracture healing in people with Down syndrome.

Down syndrome, the most common birth defect in the United States, alters human development and leads to a variety of clinical issues, which have included mental impairment, joint laxity, heart defects, sleep apnea and infertility.

“Scientists have been studying fractures for a long time in a lot of different species, and while healing might be slow in some cases, the vast majority of fractures do eventually heal in all species,” Sherman said. “In our research, the fractures didn’t heal at all.

“When bones heal, a soft callous made of cartilage, a sort of glue, will form on the bones and then connect the fractured ends back together; we call this bridging,” said Sherman. “In Down syndrome models, the glue starts to form, but it’s never able to bridge.”

This is alarming, the researchers assert, because a fracture not fully healing can have devastating health impacts, which is compounded for those with Down syndrome because of their pronounced bone density loss. Based on this, Sherman said, the risk of fractures is a “major” health concern for the Down syndrome community.

“A fracture not healing properly, what we call a non-union, can kill people, whether they have Down syndrome or not,” said Dr. Larry Suva, VTPP department head. “If this population really has a higher rate of non-union than the normal population, that’s a big deal.”

According to Suva and Sherman, there are two primary reasons this issue has gone undetected until now; the first is that those with Down syndrome are living much longer than they used to.

According to the Centers for Disease Control and Prevention, in 1960, people with Down syndrome had a life expectancy of just 10 years. By 2007, as more was learned and applied to offset the endocrine impacts of Down syndrome, the life expectancy increased to 47 years.

“We’ve known that bone mass is lower in this population, and the increased life expectancy of this population has allowed researchers to better understand the long-term implications of their lower bone mass,” said Suva. “Today, there are people with Down syndrome in their 20s and 30s who have bone mass and bone architecture consistent with someone in their 60s. They’re active members of the community and they’re playing sports. Obviously, that’s great, but if they’re at increased risk of bone fractures that won’t heal, it’s also a concern.”

The second reason this issue stayed undetected for so long is that specialized care for people with Down syndrome has not been a consideration by doctors and hospitals, which means that there wasn’t data readily available to identify this issue.

“There’s not a medical code that identifies people with Down syndrome, so researchers have not had any kind of database they could use to gather statistics that support this kind of research,” Suva said. “Down syndrome support groups and family members don’t want their loved ones or themselves singled out for having a disease. After all, they’re normal people.

“As a result, even with all of the fractures that get recorded every day in the United States, there’s no way to identify which of those patients have Down syndrome and, therefore, no organized way to track their healing,” Suva said.

The next steps in the research will involve trying to find that human data, focusing on the actual mechanisms preventing the healing of the fractures. Since nobody knew this was a problem, nobody was looking for solutions.

In the meantime, with this new awareness of the problem, the researchers hope there will be more widespread adoption of measures to increase bone strength, more careful monitoring when fractures do occur, and that physicians and others will consider the bone health of people with Down syndrome.