Revealed: Interactive map shows the areas of England where cancer patients are most likely to die within a year of being diagnosed

Figures have revealed the areas of England where people are least likely to survive for a year after being diagnosed with cancer.

Nearly a third of cancer patients diagnosed in Leicester city centre will die within a year, making it the worst performing NHS group in the country by this measure – its 12-month survival rate is 67.7 per cent.

Only 20 areas in England manage to keep three quarters of their patients alive for a year after being diagnosed, the majority of them in or around London.

Whereas the worst performing areas are mainly in the Midlands and Kent, leaving people facing a postcode lottery if they are diagnosed.

But the gap between the best and worst performing areas has shrunk by 6.3 per cent in the past 15 years, meaning people around the country are faced with more equal survival odds when they get cancer.

And the one-year survival rate of England as a whole has jumped by more than 10 per cent since 2001. 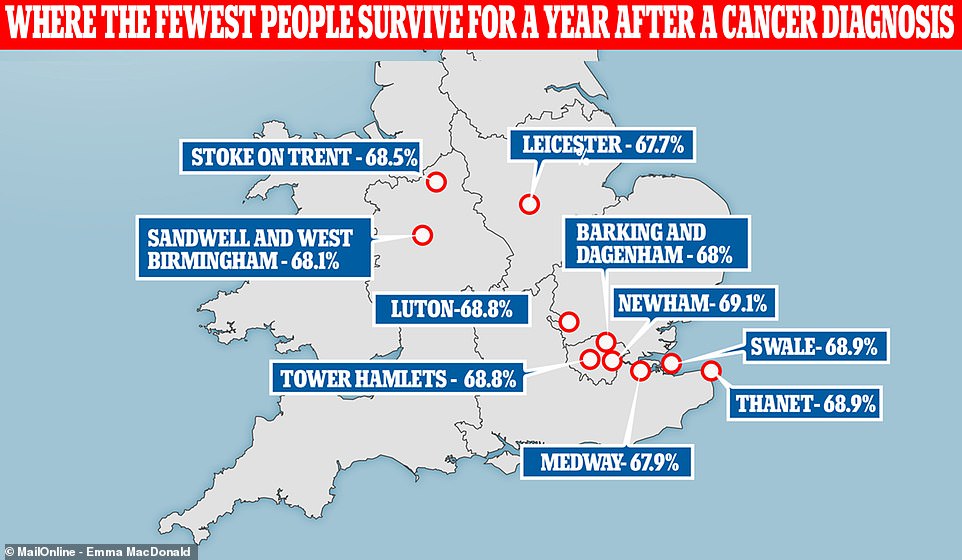 The areas with the fewest patients surviving for a year or more after a cancer diagnosis are mostly in the Midlands, Kent and more deprived areas of London. The North of England, which has historically fared worse, has improved and has no areas in the bottom 10

The statistics, released today by the Office for National Statistics (ONS), brought good news, too, however.

They show the gap between the areas with the best survival rates – headed up by Richmond in London, where 77.4 per cent of people survive a year or more – is shrinking.

While the difference between the highest and lowest survival rates was 16 per cent in 2001, it has fallen to 9.7 per cent, according to today’s numbers for 2016.

This means there is now greater equality across the country in cancer diagnoses and treatments.

And the North of England, which often comes up short in health statistics, has been overtaken by the Midlands as the region with the most areas with survival rates significantly lower than the national average.

Some 40 per cent of the 40 Clinical Commissioning Groups – local NHS bodies known as CCGs – in the Midlands fare worse than England as a whole.

In the south only 20 per cent of CCGs have significantly worse survival than the English average.

10 PLACES WITH THE WORST SURVIVAL RATES

10 PLACES WITH THE BEST SURVIVAL RATES

But experts warn staff and cash shortages in the NHS are holding the country back compared to its peers.

Matt Case, policy manager at Cancer Research UK said: ‘While it’s certainly good news that cancer survival has improved since 2001, we need to improve survival for many cancers at a faster rate if we’re going to catch up with other countries.

‘Diagnosing cancer early is key to improving survival but the NHS is currently struggling because of persistent staff shortages.

‘The Government must provide investment for more staff to diagnose and treat cancer, or the ambition to diagnose 75 per cent of cancers at an early stage by 2028 won’t be met.’

Other CCGs in the 10 with the lowest survival rates are Medway, Swale and Thanet in Kent; Barking and Dagenham, Tower Hamlets and Newham in London; and Sandwell and West Birmingham, Stoke on Trent and Luton.

Those behind Richmond in the 10 with the best survival rates are Westminster, Barnet, West London, Kingston and Hounslow in London; Surrey Heath and Surrey Downs; Southport and Formby in Merseyside, and North East Hampshire and Farnham.