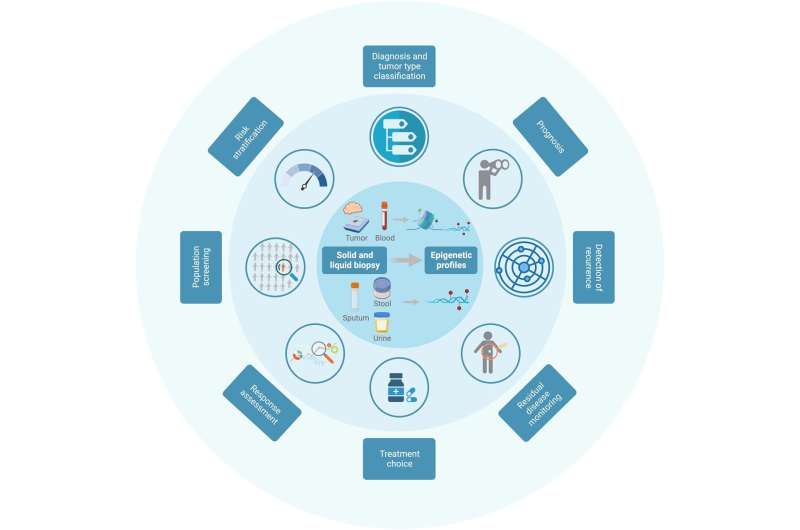 In the early 1980s, the first changes in DNA related to a chemical modification called methylation were discovered, followed by the discovery in the mid-1990s of the first tumor suppressor genes inactivated by these modifications of the genetic material. The early 2000s saw the first use of these alterations as a biomarker of cancer disease, as well as the first uses of drugs against them.

In parallel, the first chemical modifications were detected in proteins called histones, where DNA wraps around them like a pearl necklace. Such a “decoration” of DNA and its regulatory proteins define the field of epigenetics.

Now, in an article published in the journal CA: A Cancer Journal for Clinicians, Dr. Manel Esteller, Director of the Josep Carreras Leukemia Research Institute (IJC), ICREA Research Professor and Professor of Genetics at the University of Barcelona, and researcher Dr. Verónica Dávalos explain the impact of epigenetics on the clinical management of cancer patients.

Dr. Esteller says, “Epigenetics has gone from being a purely basic research discipline focused on studying how gene expression is controlled to a tool to improve early detection, predict the evolution of the disease and become a target for new treatments. One of the most outstanding aspects of its clinical translation is its use in liquid biopsy, as well as helping in the classification of tumor types, for example to correctly diagnose the types of tumors derived from the brain, skeletal muscles, joints, bones or of unknown origin. But in addition to this aspect, DNA methylation profiles are approved to determine the efficacy of treatment in brain tumors and other tumor pathologies.”

Perhaps one of the most attractive aspects for the medical oncologist is the use of epigenetic drugs to treat cancer. There are currently nine drugs against various epigenetic markers (DNA methylation and histone methylation and acetylation) approved for clinical use in various types of leukemia, lymphoma and blood diseases, as well as tumors of the soft tissues. Esteller says, “These treatments are usually very well tolerated by patients, and more than killing the tumor cell, they stop its growth as if it were a tamed beast.”