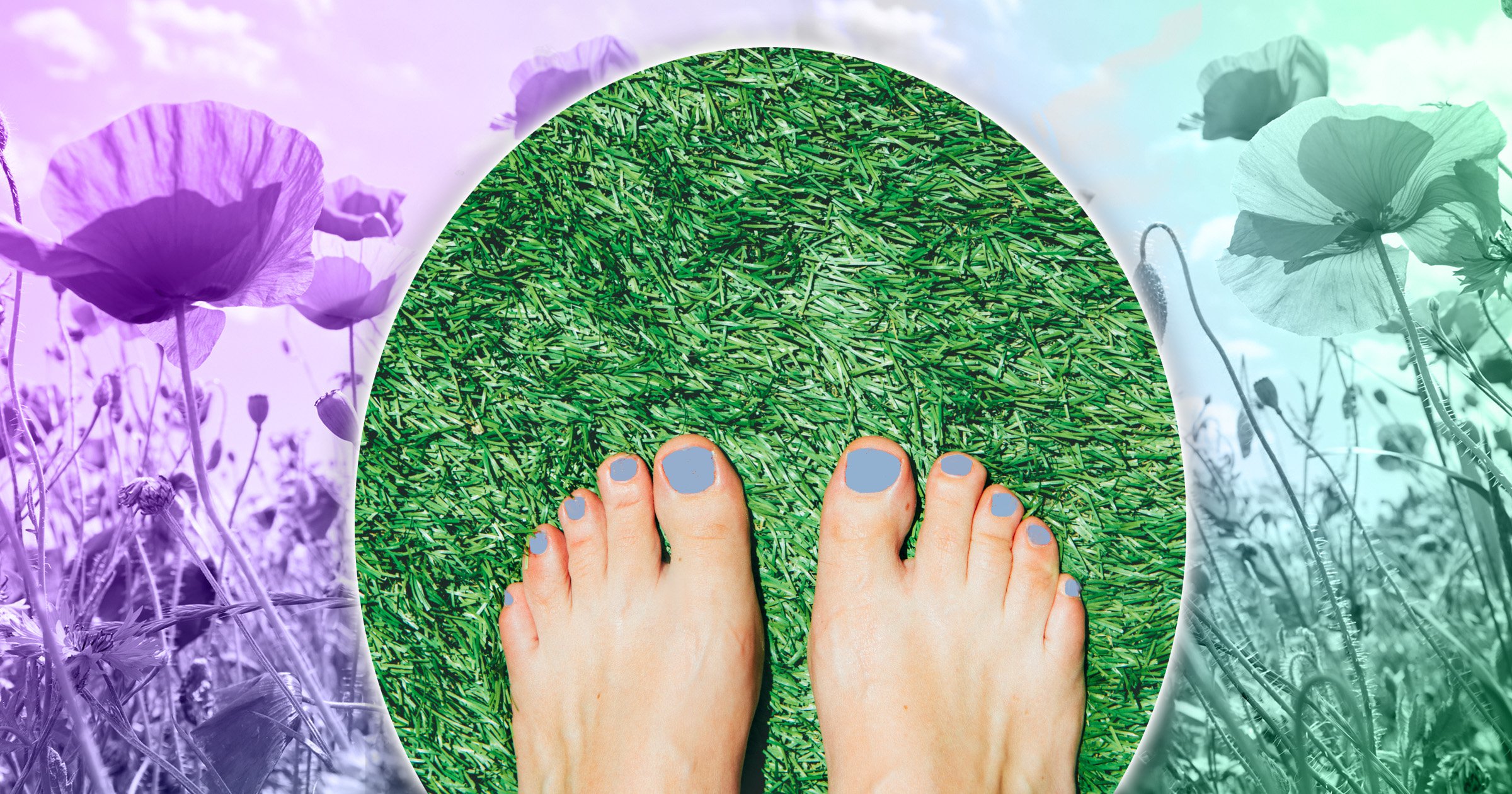 Ever feel like you’re running on empty? Like you’re flashing ‘low battery’ and you can’t seem to boost your energy?

Stress, anxiety and chronic exhaustion all cause this feeling – and it’s a common modern complaint.

But could there be a simple way to recharge your batteries by plugging yourself in to the energy of the earth? I know how that sounds, but stick with me.

Grounding – also known as earthing – is a therapeutic technique that involves physically connecting with the earth. That means actually touching – with your bare skin – grass, or sand, or soil.

The technique has been practiced for centuries and is said to work by channeling the earth’s natural energy – electrons – through direct bodily contact. It is thought to reduce anxiety and stress, and boost overall wellbeing.

Some of the claims about grounding are backed up by scientific evidence.

Research shows that when you physically connect with the earth it calms your nervous system, reduces inflammation, and improves your blood flow, energy and general wellbeing.

A 2016 study found that ‘grounding or earthing the human body significantly alters the inflammatory response to an injury,’ meaning pain from injuries was found to be reduced, and healing was sped up.

A 2012 review of grounding research concluded: ‘The research done to date supports the concept that grounding or earthing the human body may be an essential element in the health equation along with sunshine, clean air and water, nutritious food, and physical activity.’

However, the specifics of this practice have been disputed, and other experts have debunked the claim that you can harness the ‘power’ of the earth’s energy through bodily connection.

So, what’s the truth? Could walking barefoot in the park really act as a natural way to recharge your spiritual batteries? I decided to try it out for a week to see if it made any difference.

I haven’t chosen the best day to start my connection to the earth. We are in the midst of Storm Eunice, and there are red weather warnings telling people that going outside could pose a danger to life.

So, the park is out. Thankfully, I have a garden. Directly outside the kitchen door there is a slightly sheltered area, so I took my socks off and stepped outside.

However, that area is paved, so I had to go further into the garden to get my bare feet on the grass. Here, I wasn’t sheltered and was at the mercy of the wind and the rain. My first thought was that my feet were instantly freezing, and my second thought was about the brutal whipping of the wind against my face.

I tried to tune it out, closed my eyes and started some deep breathing. But I only lasted six minutes because the rain started coming down and my feet were turning to ice.

The storm was still raging, so I again opted to do my daily grounding in the garden. It was Saturday, so I went out after a leisurely brunch before getting ready for the day.

Again, the major thought process was about the weather and the cold. My feet were freezing in the wet grass, but I tried to re-frame the sensation as ‘invigorating’ rather than unpleasant, which worked for a while.

This time I lasted ten minutes, and managed to get into quite a calm state after deep breathing with my eyes closed.

On Sunday I was a bit hungover and the thought of going outside was not appealing. But I did hope the fresh air might do me good.

This time I tried walking barefoot around the garden. The weather still wasn’t the best, and I am certain my neighbours must have questions about my sanity, but the slow walk did make me feel marginally better.

I tried my best to clear my mind and focus on my breathing, my steps, and the feeling of the grass and soil against my feet.

On Monday I had planned to do my grounding during my lunchbreak, but I ended up having a very busy and stressful day, and didn’t get time to go out.

After work, I went for a run around the local park to de-stress and clear my head. After I had done a few laps of the park, I took off my trainers and socks and did my post-run stretching on the grass.

I felt less weird having something to do – the stretching – rather than just standing barefoot, and having the focus helped to keep my mind clear. I definitely felt less stressed when I came home, but that might have been the endorphins from running.

Another busy day at work, but this time I managed to get outside in my lunchbreak. I went out to the garden with a cup of tea and planted my bare feet in the grass.

The hot mug of tea in my hands helped to distract me from the cold in my feet, and by the time I came back inside (after about eight minutes), I felt more awake and ready for the afternoon.

Wednesday was a bit of a grounding fail. I was busy all day and then had netball training after work, so by the time I got home at 9pm it was pitch black and freezing cold.

I went outside, but stayed on the paved area near the kitchen door as it was lighter and also slightly covered. My feet were bare, but the paving stones don’t really count as connecting to the earth.

To make up for the previous evening’s fail, I decided to have a perfect morning of grounding.

I woke up early and went out into the garden as soon as it was light. This time I decided to sit in the grass, with my bare feet and my hands touching the ground.]

The verdict – is grounding worth it?

Regardless of the tenuous science behind the energy transfer and the electrons in the earth, it can’t be denied that taking time to be outside every day had a beneficial effect.

A combination of the routine with the intentional commitment to make some time for myself every day, helped to clear my head a little bit. The fresh air and bracing cold also felt quite nice once I got used to it and knew what to expect.

Ultimately, I can’t say that I felt any distinct change in my energy levels over the week, or that I was able to detect any different presence of earth electrons in my system, but the deep breathing and mindfulness definitely helped to reduce my stress levels.

So yes, I do think being in nature on a daily basis is a worthwhile technique – however I would probably leave the barefoot stuff until it starts to get warmer.