The first time the sharp, debilitating pain struck me was in 2018. The attack on my back was so severe that it rendered me helpless on the Airbnb floor, on my first tourist night in Kuala Lumpur.

My mind raced as I turned and twisted on the floor for hours, writhing in agony. I couldn’t understand. “What was this?” “What was happening to me?” And most urgently, “Why wouldn’t the pain stop?” Unbeknownst to me, I would be asking these same questions for the next four and a half years. This nightmare was just beginning.

It’s a kind of pain that knocks the wind out of you. When the pain strikes, it’s sudden, it’s sharp and it burns as it radiates from the upper, right side of the abdomen to the lower back to the entire right, vertical, side of the back, where it stays for never less than one hour. It’s excruciating. And it’s torture.

Meanwhile, finding sufficient medical attention for chronic back pain without evidence of injury has proven to be a special kind of torture in itself.

For years, I went to different hospitals, doctors, and specialists in Kenya and none of them knew the cause of the pain. 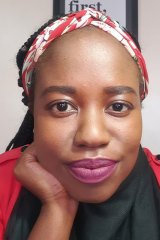 Yvonne Aoll suffered pain for years before a doctor in Melbourne finally told her what was wrong.

I travelled across the country to different counties, from Nairobi, to Eldoret, to Kisumu, to Mombasa and back to Nairobi, and still, no diagnosis nor treatment. I saw GPs, gastroenterologists, gynaecologists, orthopaedists, rheumatologists and pain specialists. These visits were futile.

I did multiple MRI scans, ultrasounds and blood tests. Still, nothing. One weekday, when a renowned hospital in Nairobi decided to dismiss me by sending me home with a backpack full of sachets, packets and bottles of different kinds of medication and narcotics, so that I wouldn’t bother them again, I knew this was it. I was truly in trouble.

However, it’s the routine misdiagnosis by doctors, leaving people in pain for years when they don’t have to be, that’s more alarming.

Misdiagnosis is a recklessness that ruins lives. If one is not overly diligent about self-advocacy, you can easily be forced into having procedures you don’t need, become drug addicted, or in some extreme cases, even find yourself in rehab. All this, while your real illness worsens and you end up disabled, if not dead.

When I visited a gastroenterologist in Eldoret one afternoon, he sat behind his desk, fidgeted with some papers, looked up and said to the four relatives and I sitting before him, “You have brucellosis, that’s what it is.”

Since doctors and specialists are revered in Kenya, treated akin to gods who are never to be questioned, my family instantly believed him. I didn’t. Upon seeking a second opinion back in Nairobi, the GP I saw looked at me appalled as I briefed her on my new diagnosis. She said there was no way the doctor in Eldoret could have made that determination. She admitted that many of her colleagues do that when they have cases they can’t solve. They deliberately misdiagnose so that patients can stop asking questions. I never had brucellosis.

Mentally exhausted, physically worn out and financially wiped out, I eventually resigned myself to a life of pain. This was going to be my life from here on out.

Earlier this winter, focusing on a new country, new job, new school and social activities, I tried to get on with life despite the pain. And then I had another acute episode on a random Wednesday while at work. Sudden. Sharp. Burning. Unending.

At the emergency department in the Melbourne suburb of Malvern, I lay on the hospital bed with a drip in my left arm, waiting for a doctor to see and dismiss me; as I’d now become accustomed.

Instead, what happened next caught me so off guard that I threw up. The doctor, a hepatopancreatobiliary surgeon, said he had a diagnosis. After four years of waiting, this man had taken 40 minutes to find out what was wrong.

He took a pen, started drawing on a notebook, tore the paper out and showed me how my internal body was (mis)behaving, and why I had been in severe pain for years. He said they’d done a lipase blood test, and that while an average person’s lipase levels are meant to be around and below 160 units per litre (depending on the laboratory), my levels were at 7,323. I had gallstone pancreatitis.

There was also a solution to this: surgery. I was speechless. I was shocked, grateful, confused, relieved and in a daze. I couldn’t believe that after years of pain and misery, this random doctor had walked in and brought with him definitive answers.

It was also what he said next that had tears suddenly rolling down. Almost angry and shaking his head, he said, “I can’t believe you saw several gastroenterology surgeons before. They should have caught this. This is a life-threatening condition. You did not need to suffer this long. You’ve been in unbearable pain for too long.”

With a small smile and tap on my shoulder, he said: “But don’t worry, we’ll get to it. Now you’re here.”

Now I’m here. I finally have a diagnosis.

As I await surgery, I’m curious to see what life looks like on the other side of the operating table. It’s been a very long time coming.