The A&E map of shame: Graphic reveals the 10 NHS trusts where the most patients are waiting more than four hours to be treated

Only a third of patients visiting England’s worst-performing A&E are being treated within four hours.

And just six hospital trusts in the entire country hit the target in February, dubbed the ‘toughest month ever for the NHS’.

On average, English hospitals only managed to see 84.2 per cent of A&E patients within the four-hour time limit – the lowest figure ever.

Health leaders have today slammed the figures, analysed by MailOnline, as being ‘dire’ and ‘a catastrophe’.

They come amid controversial plans announced by the NHS which could see the four-hour target scrapped completely because hospitals keep failing to meet it. 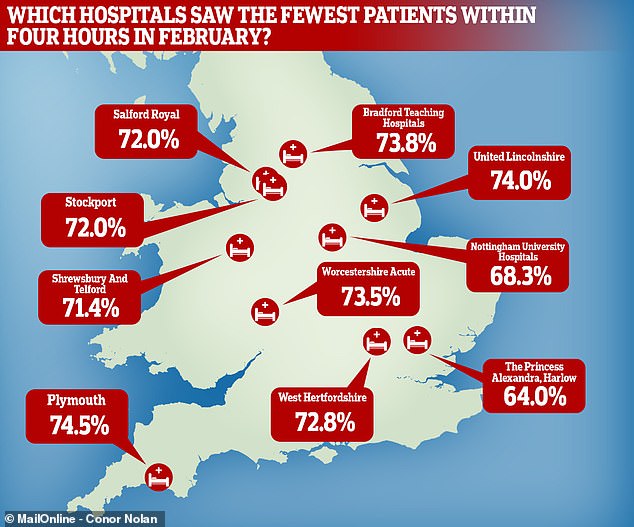 The Princess Alexandra Hospital NHS Trust in Harlow, Essex, had the worst performing A&E in February, managing to treat, admit or discharge just 64 per cent of its patients in four hours

The Princess Alexandra Hospital Trust in Harlow, Essex, cared for just 64 per cent of its A&E patients within the NHS time target last month.

And all but six of the 135 hospital trusts in England fell short of the health service target of treating or discharging 95 per cent of patient in four hours.

The British Medical Association this month said ‘it’s difficult to imagine the NHS in a much worse state’.

NHS Providers, a trade association for hospital trusts, recently posted a comment on its website saying February was the ‘toughest month to date’ for the health service.

In the final week of January overloaded hospital beds were the busiest they had been all winter, with 95 per cent of overnight beds filled.

‘Four hours is a reasonable time for patients to be seen. It’s certainly reasonable for those who are very ill and, if you’re not very ill, you don’t want to be in A&E.

‘The population keeps getting bigger and there are something like 200 more people over the age of 85 every day. This is absolutely going to get worse.’

Recently announced plans could see the four-hour target scrapped in favour of new ways of measuring how long it takes for people to be seen.

These will be trialled in the next few months and potentially rolled out later in the year, according to NHS England.

Mr Moulton added: ‘If you’re in the Olympics and you can’t do the high jump you don’t ask to lower the bar. Hospitals need more capacity to meet the target.

‘Changing the target isn’t going to make waits any shorter and it won’t improve anything for patients or staff.

‘It will camouflage the very long waits and take the heat off the NHS for a while by making it harder to compare with previous years.’

NHS England this week began the process of scrapping the four-hour maximum A&E wait target to replace it with new ones.

In place of its infamous four-hour target, the NHS is now trialling seeing the most seriously ill patients – strokes and heart attacks, for example – within one hour.

Those with less serious conditions, meanwhile, will have to wait longer, and new targets will be drawn up after pilots at around a dozen hospitals later this year.

Having failed to hit the four-hour benchmark for nearly four years in a row – it was last met in July 2015 – the NHS is now rewriting its own goals.

‘Now is the right time to look again at the old targets,’ the NHS’s medical director said.

This is despite past warnings from emergency medicine experts that scrapping the target could put patient safety at risk.

In January, Dr Taj Hassan, president of the Royal College of Emergency Medicine (RCEM) said: ‘Scrapping the four-hour target will have a near-catastrophic impact on patient safety in many emergency departments that are already struggling to deliver safe patient care in a wider system that is failing badly.’

Removing the target could wipe the NHS’s slate clean in one respect, making A&E data for the past 15 years difficult to compare with how hospitals perform in future.

And one branch of the health service, NHS Providers, has already admitted it may look like bosses are ‘moving the goalposts’.

A&E departments in February managed to process six per cent fewer patients than they did last year, which was considered the height of the NHS’s ‘worst ever winter’.

Ten of them fell to below the 75 per cent mark, meaning a quarter of their patients were waiting more than four hours to be seen.

Labour’s Shadow Health Secretary, Jonathan Ashworth, said: ‘It really is dire that so many hospitals are failing the four hour A&E target and patients are left to endure longer waits in pain and distress.

‘The simple truth is year after year of Tory underfunding and cutbacks have pushed A&E departments to the brink.’

The Princess Alexandra Hospital Trust was comfortably the worst, followed by Nottingham University Hospitals NHS Trust, which treated 68.3 per cent in time.

Hospital trusts in Shrewsbury and Telford, Stockport, Salford, West Hertfordshire, Worcestershire, Bradford, Lincolnshire and Plymouth all left more than a quarter of their patients waiting for more than four hours.

The Princess Alexandra Hospital Trust serves a population of around 350,000 people in Harlow and the surrounding area.

It was rated Requires Improvement – the second lowest out of four possible scores – by the Care Quality Commission in its latest report in March last year.

The report warned the hospital, built in the 1960s, is showing ‘very significant signs of age’ and needs £50million worth of work doing to it.

Other February statistics slammed as ‘shameful’ by the Shadow Health Secretary, Jonathan Ashworth, showed waits for cancer treatment are longer than ever, with record numbers of people waiting more than a month to start therapy.

And the NHS missed its target to treat people within two months of a doctor’s referral for the 37th month in a row.

The waiting list for all types of treatment rose to 4.16million people – second only to 4.18m in October last year.

An NHS England spokesperson said: ‘NHS staff across the country have been working incredibly hard throughout winter to provide the best care for patients and despite significant increases in demand, almost a quarter of a million more people were seen and treated within four hours in A&E this winter compared to last year.’

Rachel Power, chief executive of the Patients Association, told MailOnline: ‘These figures are a huge concern, particularly when you consider the relatively mild winter we have experienced this year.

‘It’s a sad indictment of the state that our health service has been allowed to fall into that thousands of patients needing urgent medical help face the awful prospect of being left stranded in cramped corridors or on hospital trollies, waiting for a hospital bed to become available.

‘These figures are also important considering the NHS’s plans to revise targets for A&E patients to be treated within four hours.’

Dr Simon Walsh, BMA emergency medicine lead, consultant committee, said: ‘These figures show the worrying scale of pressures on emergency departments across the country as inability to meet the four-hour target has now become the norm and not the exception.

‘Despite a relatively mild winter and lower cases of influenza, many trusts are regularly reporting performance figures significantly below the 95 per cent target.

‘A major factor behind this relentless decline in performance is the excessive occupancy that many hospitals are running at; often exceeding levels of capacity at which it is accepted that performance will inevitably decline and even reaching levels where safe patient care is put at risk.

‘This is both concerning for patients who are stuck in overcrowded emergency departments waiting for beds to be available on the wards and concerning for the staff who are working around the clock in incredibly challenging circumstances.’

John O’Connell, chief executive of the TaxPayers’ Alliance, told MailOnline: ‘It’s deeply concerning that taxpayers and patients are experiencing such long waiting times at many hospitals and GP centres across the country.

‘Too often taxpayers’ money is thrown at the NHS without any thought given to the long-term solutions.’