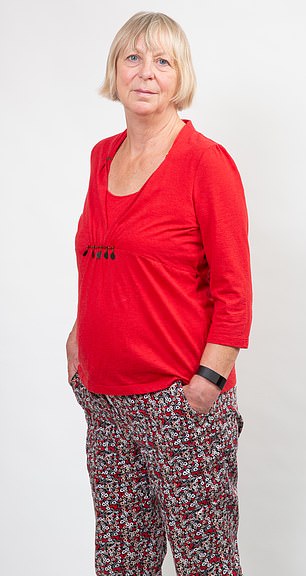 Felicity Payne from Eastbourne, East Sussex, found herself constantly exhausted and thought she had ashtma

As far as Felicity Payne’s GP was concerned, the irritating cough she’d had for months was a sign that she was suffering from asthma.

So the former teacher, who was in her late 50s, was prescribed a steroid inhaler to use twice daily and another drug to dilate her airway as and when she needed it.

But after more than a year of using them as prescribed, Felicity’s condition had worsened. She was frequently breathless and struggling to maintain her active lifestyle.

Whereas previously the mother of three, a widow from Eastbourne, East Sussex, had been a keen walker who enjoyed running around after her five grandchildren, now she found herself constantly exhausted.

She was also having numerous chest infections that laid her low for weeks on end.

And there was a reason for that: Felicity, now 62, didn’t have asthma at all. In fact, she had chronic obstructive pulmonary disease (COPD) — a condition for which inhaled steroids aren’t just ineffective, they can make it worse.

It would take more than two years of to‑ing and fro-ing between her GP and specialists before anyone would think to run the simple test that gave the correct diagnosis — and new research has found this is not uncommon.

More than a million people in the UK are being treated for COPD, but some experts fear thousands more may be affected who have been incorrectly told they have another complaint, such as asthma.

Indeed, a new study from Imperial College London has found that more than half of COPD patients are mistakenly told they have asthma and wait months, even years, to get a correct diagnosis.

COPD is an umbrella term for progressive lung diseases such as emphysema and chronic bronchitis. It is quite different from asthma, which is an allergic condition triggered by exposure to allergens.

Those affected by COPD struggle to get air in and out of their lungs, due to damage to the air sacs and an inflamed, narrowed airway. 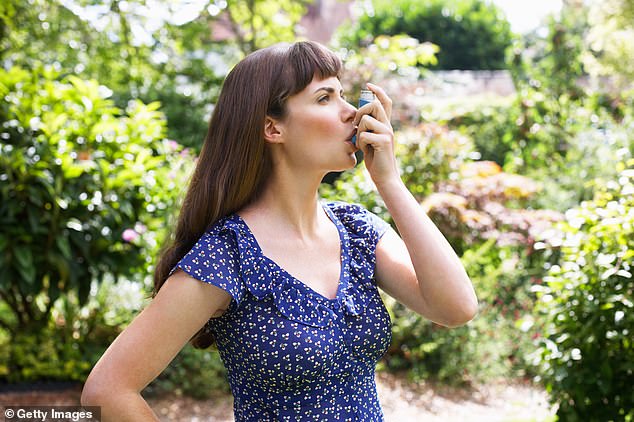 But after more than a year of using a steroid inhaler as prescribed, Felicity’s condition had worsened. She was frequently breathless and struggling to maintain her active lifestyle. And there was a reason: Felicity didn’t have asthma, she had chronic obstructive pulmonary disease

One of the first signs is a cough, which leads to breathlessness and wheezing. That’s because over several years the walls of the airway thicken and excess mucus is produced, which worsens symptoms and increases the risk of infection.

Air pollution and genetics have been implicated, but smoking is responsible for 90 per cent of cases. And therein lies a problem.

Experts say there is a common misconception among family doctors that COPD affects only smokers, or those who have quit within the past couple of years.

In fact, a significant proportion — such as Felicity, who quit cigarettes in the Eighties — stopped smoking 20 or 30 years before symptoms emerged. And at least one in 20 has never smoked at all.

‘One of the problems is that even ex-smokers can get short of breath, which is a symptom. But when they tell their GP that they don’t smoke, the GP is, therefore, much less inclined to consider COPD and much more likely to diagnose asthma.’

Dr Jennifer Quint, a respiratory disease specialist at Imperial College London, says many of her patients quit smoking decades before they were diagnosed.

‘COPD is just not on doctors’ radar,’ she says. ‘Yet this illness can literally blow huge holes in your lungs.’

It can be diagnosed with a test that is readily available to all GPs, called spirometry. This uses a hand-held mouthpiece to measure how much air a patient breathes out and how fast they blow it out.

The secret to differentiating it from asthma is getting patients to take a puff on an asthma inhaler to dilate the airway before repeating the test.

In asthma, the drug should reverse the inflammation — so the air flows freely. In COPD, the damage is irreversible, so there will always be greater obstruction.

Professor Barnes, who is also a consultant in respiratory medicine at the Royal Brompton Hospital in London, says both current and former smokers — even those who quit decades ago — should be tested for chronic obstructive pulmonary disease if they have a persistent cough or breathlessness. ‘Smoking seems to set off this slow inflammatory process that keeps progressing even when you’ve quit,’ he says.

Added value: Should our food be fortified with vitamins and minerals?

Since World War II, white flour in the UK has had to be fortified with calcium, iron, niacin (vitamin B3, which helps repair our DNA) and thiamine (vitamin B1, which our bodies need to metabolise glucose).

White flour has been fortified in the UK with vitamins

The idea was to boost flour’s nutritional value at a time when many people were on short rations.

The government recently decided to keep this fortification mandatory. ‘It saw that there were still benefits to be had, particularly among vulnerable groups such as older people,’ says dietitian Ursula Arens.

The limits are set so that it would be difficult to overdose by eating baked goods.

THE DOWNSIDE: ‘Cumulatively, you could exceed recommended amounts, particularly if you take high-dose supplements, too,’ says dietitian Frankie Phillips. So those taking supplements of more than 20mg a day of iron, for example, who also eat lots of white flour-based products may experience nausea and vomiting.

Professor Barnes is concerned that undiagnosed patients are missing out on interventions that, if started early enough, can help manage the condition. Also, an asthma misdiagnosis may lead to the wrong treatment, raising the risk of life-threatening infections.

Asthma patients are routinely given inhaled steroids, which are usually ineffective for most COPD sufferers. At worst they can be dangerous, as the drugs suppress the body’s immune system — to help reduce swelling in the airway — which makes it easier for bacteria to penetrate the lungs. As a result, patients wrongly identified as asthmatics tend to suffer frequent chest infections.

The condition is resistant to steroids because the inflammation is caused by different types of cells, explains Professor Barnes.

In asthma, it is mainly due to eosinophils, white blood cells produced by the immune system as part of an allergic response.

In COPD, swelling in the lungs is due to neutrophils, a different type of white blood cell that fights infection. Inhaled steroids are good at calming inflammation caused by eosinophils but largely ineffective against neutrophils. Although incurable, COPD can be well managed with pulmonary rehabilitation; regular exercise (such as walking, jogging, skipping, rowing and swimming) slow the damage to the lungs.

‘The earlier it begins, the greater the benefits,’ adds Dr Quint, who was involved in the recent research.

Dr Quint has patients who were identified early, started pulmonary rehabilitation and, despite suffering advanced lung disease, ‘can cycle for 20 minutes’.

Others who received a late diagnosis are housebound and rely on portable oxygen cylinders.

Felicity is thankful she was diagnosed before reaching that stage, but astonished it took so long.

Her GP diagnosed asthma when she was almost 58 and grieving the sudden loss of her husband, David, to cancer. Yet asthma almost always develops in childhood or young adulthood. COPD, on the other hand, rarely occurs in those under 35.

There were other key signs that she did not have asthma.

People with chronic obstructive pulmonary disease suffer round-the-clock with a chronic cough that produces a lot of phlegm — as Felicity did. Asthma is more likely to cause night-time wheeziness that disturbs sleep. And the inhaled steroid beclomethasone, plus an inhaler of the drug salbutamol — given to dilate the airway — failed to help her.

A spirometry test could have been the final piece in the jigsaw.

Instead, when she failed to respond to the steroids, Felicity’s GP referred her for a chest X-ray that revealed a suspicious shadow which, she was warned, could be lung cancer.

‘I was terrified,’ says Felicity.

In September 2015, she saw a specialist at Eastbourne General Hospital who ruled out cancer.

‘It was an enormous relief,’ says Felicity. Yet she was still coughing and breathless. She was referred to an ear, nose and throat specialist to see if her cough was due to post-nasal drip — where excessive mucus runs from the nose into the throat, causing irritation. But doctors found nothing.

It was only after her fourth chest infection in a year and no improvement in her ‘asthma’ symptoms that she was finally referred back to a respiratory specialist who carried out a spirometry test.

Felicity has now stopped taking inhaled steroids and has not had a chest infection for more than two years, managing her condition with exercise and a bronchodilator inhaler if she gets breathless.

‘I try not to let my illness stop me from doing the things I like,’ she says. ‘I have taken up yoga and swim three times a week. I plan to enjoy life as much as I can.’