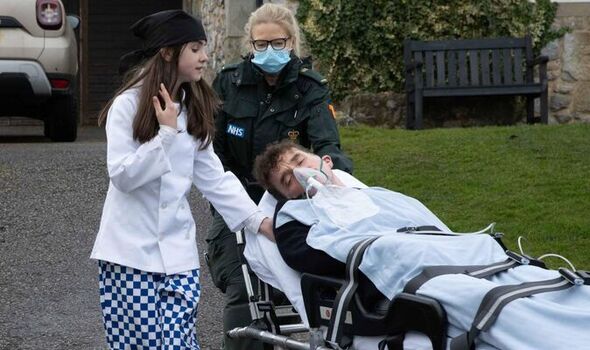 When one of Emmerdale’s best-loved characters, Marlon Dingle, catches a glimpse of himself in the mirror next week he sees the right side of his mouth drooping – and his world falls apart.

Marlon – played by Mark Charnock for more than 25 years – has been feeling stressed, nauseous, dizzy and disorientated, but like many people who have a stroke he hasn’t thought anything of it.

A drooped face is one of the first tell-tale signs and next week’s heartbreaking drama will be the start of a big new storyline that will run for months as Marlon and his new fiancee, Rhona, come to terms with his illness.

Someone has a stroke every five minutes in the UK, with more than 100,000 people a year affected.

Mark and the soap’s bosses hope the hard-hitting plot, created with the help p tion, w son of the Stroke Association, will raise awareness about how a stroke can affect not just the person who has it, but also their partner who must become a carer overnight.

“When Marlon sees drooped, a voice inside saying ‘what is happening to me?’. But before he can do anything he collapses.”

Luckily for Marlon, April returns to find later and calls for an ambulance.

Mark says: “Time is important and the crucial thing is the acronym FAST – which is so important if someone is having a stroke.

“It refers to Face drooping, Arm weakness, Speech to difficulties and Time ring 999. It makes an enormous difference patient is treated within four and a half hours.”

April’s quick-thinking actions ultimately help save Marlon’s life. The character is given an emergency thrombectomy, one of two options available to those who have a stroke.

This involves inserting mesh device into an in the groin and moving br up to clot the brain to pull the out.

It only works with people where the blood clot is in a large artery.

The other treatment is thrombolysis ing a clot-busting drug, which was given to year-old chef Chris King, who survived a stroke in May 2016.

He is one of two survivors Mark spoke to at length to gain a greater understanding the illness before he started filming, as well as working with the Stroke Association and medics.

Chris, 55, says: “I was waiting for a with my ex-wife. She suddenly d why I was slurring and talking rubbish.”

“She realised I was having a stroke and phoned the ambulance. They tried to get me to stand up, but I couldn’t feel anything in my left leg or arm. Having a stroke hits you in the mouth like you have been hit by a boxer.”

In Chris’s case, fatty deposits had built up in his right carotid artery, blocking 70 per cent of it. A piece of this blockage broke away and lodged in his brain, causing his stroke. He spent the next 13 weeks at hospitals in Southampton.

Margate and Canterbury before being sent to a care home to slowly learn how to walk again.

A year or so after the stroke, Chris – whose use of his left arm has never returned – was given a council flat in Kent.

Unable to work, he says he talked to Mark about his experience and the mental battle to get over his stroke, which he found far tougher than the physical difficulties.

“I told Mark a lot about how it has affected me mentally and how in the blink of an eye, the simplest of things like tying shoelaces, putting on socks and a pair of trousers become real-life challenges,” says Chris.

“I can stand up now and walk from my sofa to the kitchen, but I can’t do what most normal people do and pop to the shops – I wouldn’t get there. It has been very hard, but getting over it mentally has been even more difficult. I have found it tough and am just glad I didn’t lose the use of my dominant right arm. I don’t think I could have coped.”

Chris now volunteers at a local social enterprise, The Chequers Kitchen, teaching other stroke survivors how to cook. He readily admits his stroke may never have happened if he hadn’t been leading such an unhealthy lifestyle.

It was something doctors discussed with him afterwards and that he wanted to stress with Emmerdale’s production team. “I was a workaholic and my average week was 96 hours,” says the chef. “I would be in at 6am working through until midnight. Most sensible people would go to bed but in the catering industry, winding down is an essential part of the job. I’d have a few beers which would turn into the vodka bottle coming out.

“You are asking your body to cope with a lot of things you shouldn’t ask it to do.” Praising Mark and Emmerdale for raising awareness about strokes, Chris adds: “I had no clue that your lifestyle could impact your chances of having a stroke like this, so it is great that Emmerdale is doing this storyline.”

For Mark, the bravery of Chris and another survivor he spoke to, Nick Hounsfield, has given him a far better understanding of the devastation inflicted on a person’s loved ones as they find themselves having to become carers overnight.

“I have learnt so much and am shocked it affects so many,” says Mark. “I found filming this storyline very emotive and the bravery of the survivors in dealing with their strokes is incredible. I hope we can do this story justice.

“I hope it will also make people stop and think about their own lifestyles and the things we can do to prevent a stroke happening to us.”