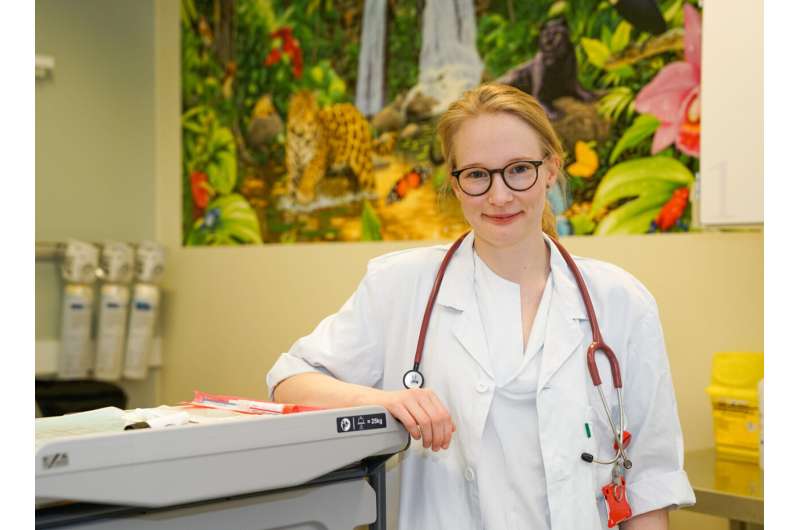 When Inger Heimdal started studying the coronavirus in children in 2014, not many people thought the topic sounded particularly exciting.

Coronavirus was considered quite harmless and of little interest to research. That has changed, to say the least.

For two years now, the novel coronavirus SARS-CoV-2 has ravaged populations the world over. Some researchers believe that the virus will mutate toward less harmless variants.

“When I started my research, there were four corona varieties that weren’t considered particularly dangerous. Maybe SARS-CoV-2 will become a new ‘member’ of this group. In that case, it would be really useful to know more about the four older coronavirus variants. A lot of this knowledge might be transferable to SARS-CoV-2 in the near future,” says Heimdal.

Heimdal is taking her doctorate in coronavirus infections in children who were admitted to St. Olavs Hospital in Trondheim for acute respiratory disease in the period 2006–2017.

Of the 4,312 children with respiratory infections hospitalized during the twelve-year study period, the researchers identified 341 cases (8%) with coronavirus.

Although the vast majority of people become only mildly ill with the common coronavirus variants, a few patients become seriously ill and need breathing support and fluid therapy.

“Seriously ill patients often have to stay in hospital for a long time. This demands significant resources from the health care system. We need to know more about the disease burden that coronavirus causes in order to plan for health services in the future,” Heimdal said.

One challenge in studying the disease burden of coronavirus is that it often occurs in tandem with other respiratory viruses.

NTNU researchers found other co-occurring viruses—mainly RS virus and rhinovirus—in 70% of the cases. RS can cause pneumonia in young children, while the cold virus rhinovirus is considered a milder virus.

When Heimdal and her colleagues compared the various respiratory viruses, they discovered something interesting. Among the children who only had coronavirus, one in five developed a serious respiratory infection and required more intense medical treatment.

The risk of serious illness turned out to be twice as high for the children who contracted a combination of coronavirus and RS virus and for those who only had the RS virus. Forty percent of these children experienced a serious course of the disease.

“I think parents of young children have more reason to be worried about the RS virus than coronavirus. In our study, we see that the RS virus causes hospital admissions far more frequently, and among those admitted, a much larger proportion develop a serious disease course,” she says.

Is having more viruses advantageous?

It’s easy to believe that the more virus variants there are, the worse the disease. But Heimdal found that the proportion of serious illness among children who had both corona and rhinovirus was clearly lower than for those who only had corona.

Could it be an advantage to contract both the rhinovirus and coronavirus?

“It actually looks like having both viruses might be advantageous, but I have to emphasize that our model only enables us to study associations. We can’t establish a clear causal link. But the find is really interesting,” Heimdal says.

“Inflicting a potentially harmful virus on a patient isn’t ethically justifiable, even though it might suppress other viruses. But it would be exciting to find out what it is about the rhinovirus that reduces disease severity.”

“Maybe the rhinovirus triggers the immune system to be more at the ready in order to effectively attack more dangerous viruses. Hopefully, research can help us figure out what’s happening so that it can be useful in treatment,” she says.

According to Heimdal, cell cultures have previously shown that rhinovirus has this effect on SARS-CoV-2, but this is the first time the effect has been detected in patients.

“There’s less room for new variants now that the population is starting to be so well immunized. Viruses change all the time, but it’s rare for very much to come of it. The coronavirus is also inherently limited in what it can come up with,” Heimdal says.

“Overall, the degree of immunity in the population is more important than which variant happens to have gained the greatest foothold,” she says.

Heimdal believes indications are numerous that SARS-CoV-2 will resemble prior coronavirus variants. For children, this means that a lot of them will be infected annually, but the vast majority will only experience a mild cold.

A handful of kids could have serious enough symptoms to require being hospitalized, but overall in far lower numbers than for the RS virus and rhinovirus.

The Ph.D. candidate’s assessment is that the RS virus will probably dominate over SARS-CoV-2, while the combination of coronavirus and rhinovirus may conceivably cause milder symptoms.

The first time the coronavirus was detected in humans was in the 1960s, when two different viruses were identified. A new and dangerous coronavirus—SARS-CoV—emerged in China in 2002–2003. The ensuing epidemic never reached Scandinavia, and the virus appears to have disappeared. In the wake of the SARS epidemic, two more coronaviruses were detected.

MERS-CoV, the sixth version, appeared in the Middle East in 2012. The disease can cause serious lung disease, but has not spread outside the Middle East.

The seventh coronavirus that we have all become well acquainted with as SARS-CoV-2 , and the resulting disease COVID-19, struck in 2019. The virus spread around the world at breakneck speed.