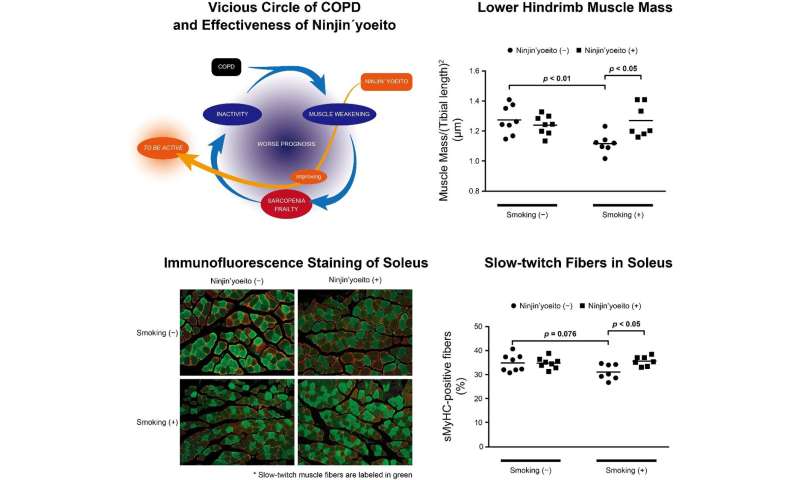 Chronic obstructive pulmonary disease (COPD) is a lung disease caused by long-term inhalation of harmful gases such as cigarette smoke. Scientists have recognized deterioration of muscle tissue, known as, as a secondary effect of damaged lungs. This frailty makes it difficult for individuals to move around and exercise, which is turn worsens the state of their lungs, causing an endless downward spiral in overall health.

Exercise therapy is the only established treatment for the skeletal muscle complications of COPD, however, depending on the severity of sarcopenia frailty in the patient, such treatment may not be possible. This imbalance has become an urgent issue to address. Ninjin’yoeito is a carrot-based Japanese herbal medicine commonly given to people recovering from anorexia and physical weakness after illness or surgery for its supplementary effect in restoring physical strength. Also, the medicine has been seen to improve muscle mass loss in aging mice through the activation of PGC-1α- a protein involved in improving muscle function.

“Based on this, we hypothesized that Ninjin’yoeito enhances PGC-1α expression in skeletal muscle and may improve muscle complications associated with COPD,” explains Associate Professor Kazuhisa Asai from the Osaka City University Graduate School of Medicine. He led a research group in testing this hypothesis by including Ninjin’yoeito in the diet of mice who had been exposed to cigarette smoke for 12 weeks. Their findings were published online in the International Journal of Chronic Obstructive Pulmonary Disease on November 27, 2020.

Professor Asai’s team measured the lower leg muscle mass of the smoke-exposed group of mice with a microCT and noticed they had atrophied, like human COPD patients. However, he saw no such change in muscle mass with the experimental group of mice, suggesting that the addition of the carrot-rich medicine cancels out the effects of sarcopenia frailty.