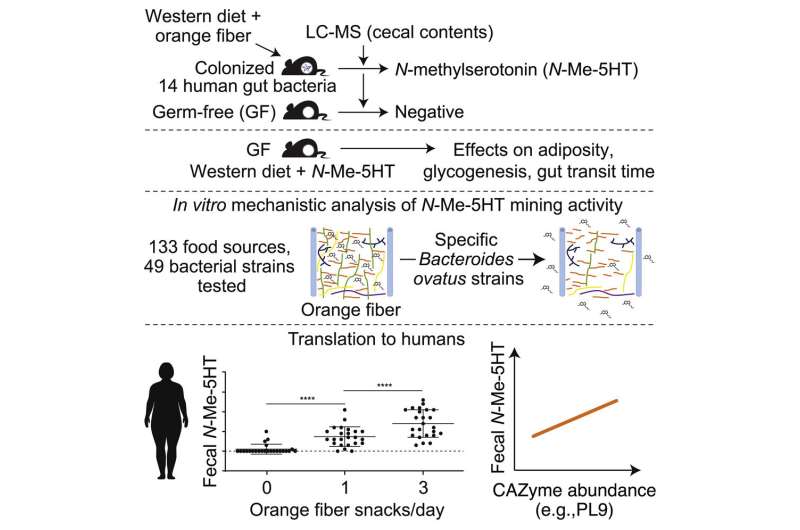 A new study from Washington University School of Medicine in St. Louis demonstrates that certain human gut microbes can mine dietary fiber to extract nutrients that otherwise would remain inaccessible to the human body. The study, published June 27 in the journal Cell, illustrates how the fiber byproducts of food production—such as rinds, peels and seeds of fruits and vegetables—may be an untapped source of beneficial biomolecules that contribute to human health.

Many factors, including population growth, climate change, and the societal disruptions caused by the COVID-19 pandemic have focused attention on food production. This includes consideration of the massive amount of waste generated during food manufacturing and the potential nutritive value of what is normally discarded. The composition of fibers present in these byproduct streams reflects their different sources as well as the different types of steps applied during food manufacturing.

“These byproduct streams could represent a sustainable and scalable source of previously uncharacterized biomolecules, and of known biomolecules that are otherwise difficult to obtain in quantity,” said senior author Jeffrey I. Gordon, MD, the Dr. Robert J. Glaser Distinguished University Professor and director of the Edison Family Center for Genome Sciences & Systems Biology. “For example, about 140 million tons of citrus were produced in the world in 2020. Only about half of the total weight of processed fruits is used in the production of juices, with tens of millions of tons of citrus product waste generated annually. We turned to our gut microbes as ‘master biochemists’ and asked what types of normally inaccessible biomolecules are they able to liberate, or mine, from these fibers.”

The researchers first studied groups of mice harboring a collection of common human gut microbes, as well as so-called germ-free mice that were maintained without any microbes. Mice were fed a high-fat, low-fiber diet typical of that consumed by many people in the U.S., with or without supplementation of the diet with fibers recovered from oranges or from peas. The researchers identified N-methylserotonin as a molecule that was only liberated when mice were colonized with the collection of human gut microbes and were given the diet containing orange fiber.

Testing 49 different types of human gut bacteria, they identified a strain belonging to one type of gut bacterial species—Bacteroides ovatus—that was able to efficiently mine N-methylserotonin from orange fiber. Using innovative molecular analyses, they determined that this strain was able to produce enzymes that we lack in our own human genome—enzymes that functioned as molecular scissors to break apart the fabric of complex sugars that entrapped N-methylserotonin within the orange fibers.

The investigators went on to characterize the biological effects of N-methylserotonin. When given to germ-free mice in their drinking water while consuming the high-fat U.S. diet without orange fiber, N-methylserotonin reduced fat stores, improved sugar metabolism in the liver, and produced more rapid gut transit times.

The researchers then showed that the results they obtained from their preclinical work in mice translated to humans. In a small clinical trial, they documented that people eating an orange-fiber containing snack had increases in the amount of N-methylserotonin in their stool samples. The effect was fiber-specific: It did not occur when a pea fiber-containing snack was consumed. Moreover, consumption of the orange fiber snack was accompanied by a pronounced increase in levels of microbial genes—present in the participants’ gut microbiomes—that break down the polysaccharides trapping N-methylserotonin in the orange fiber.

The approach used by the investigators highlights the relationship between microbiome science, food science and nutrition. The study underscores how dietary fiber is not one entity but many. It suggests a framework for identifying affordable and sustainable sources of fiber and their associated nutrients that take advantage of the byproducts of food manufacturing that would otherwise be discarded as waste.

Gordon said that relatively little is known about N-methylserotonin, but it is very similar in structure to serotonin, a neurotransmitter with important roles in mood, sleep and other key functions in the body. The researchers also determined that N-methylserotonin is present in only a very small number of fiber types. Testing more than 130 edible plants, including major food staples such as corn, wheat and rice, they identified just a few peppers (but not chili peppers, bell peppers or black pepper) that contain N-methylserotonin.

“Serotonin is involved in many processes in the body, from mood to appetite to digestive health,” said co-author Michael J. Barratt, Ph.D., an associate professor of pathology and immunology. “What we’re trying to decipher is the extent to which N-methylserotonin acts similarly to, or distinctly from, serotonin itself. We see potentially beneficial effects from giving N-methylserotonin to mice, but it’s important to determine whether it has features that are different from serotonin.”

The research suggests a number of possible approaches, including supplementing the diet with select fibers, generated in ways that preserve their valuable content of “mineable” biomolecules. The benefit of such fibers for the consumer would be related in part to their gut microbiome composition. In some cases, a combination of fiber and a probiotic composed of an adept bacterial miner of beneficial fiber-associated biomolecules may be part of the recipe for personalized nutrition.

“Ideally, we would like to be able to recommend fibers based on knowledge of a person’s microbiome and, specifically, the metabolic capacities it possesses to mine certain fibers,” said Barratt, also the executive director of the Center for Gut Microbiome and Nutrition Research.