Super cushioned, or "maximal", running shoes are in very much in vogue thanks to champions such as marathon king Eliud Kipchoge adopting them, yet the latest of a new series of studies shows just how much they can affect the way we run – not all of it for the better.

Previous research has found that compared with traditional trainers maximal shoes can increase load and impact in the body, which is associated with an increased risk of injury. However given multiple brands of footwear were used it has been suggested these differences may have resulted from factors other than the cushioning. 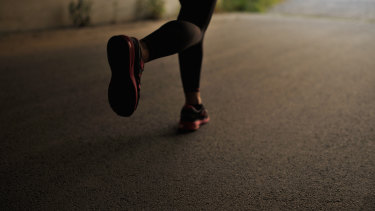 Our running shoes change the way we move.Credit:Getty

For the new study, researchers from Oregon State University used the same model of shoe by the same manufacturer, adjusting only the stack height of the cushioning to be minimal, traditional or maximal.

They took 20 recreational runners and put them through their paces, repeating the exercise with each of the three shoes, while they captured ground force and ankle motion using force plates and a 3D motion capture system.

“While the loading rate was significantly greater in the minimal shoe compared to the maximal shoe, no other differences were seen for the ground reaction force variables,” the authors said in the Journal of Science and Medicine in Sport.

“Previously cited differences in ground reaction force parameters between maximal and traditional footwear may be due to factors outside of midsole stack height.”

Most people are likely to benefit from them.

They did, however, find that ankle rolled more in the minimal and maximal shoes, compared to the traditional shoe. They also found that maximal shoes may affect balance more leading the ankle to roll for longer and for greater pronation as the foot left the ground.

“[This] may place runners at a greater risk of injury,” they concluded, noting that differences in findings across studies mean more research is needed.

Anthony Blazevich is a Professor of Biomechanics at Edith Cowan University and the director of the Centre for Exercise and Sports Science Research.

“With the small amount of data available, there’s no evidence of increases in injury rate with maximalist shoes,” he said, though there may be with minimalist shoes. “However, more research is needed, especially since maximalist shoes ‘may’ influence running patterns in a way that might be considered to increase injury risk.”

Dr John Arnold is from the school of Health Sciences at the University of South Australia.

He explains that our bodies are “very good” at compensating for the softness of the surface or shoe we are running in and such studies demonstrate how much cushioning can influence the way we move.

“The main drawback is it doesn’t measure injury, it measures the load on the body that we think may cause injury,” Arnold said. “So I don’t think it’s very concrete or directs us to what shoes we should buy but it does draw up some interesting questions about the what these new types of footwear can do to the body or how they change the way we run.”

While the evidence does not prove maximal shoes result in a greater risk of injury, there is evidence they can result in performance benefits, Arnold says.

The maximal Nike prototype shoes Eliud Kipchoge wore when he became the first person to run a sub-two-hour marathon last year, are now considered so performance-enhancing they would be classed as non-compliant according to new World Athletics rules.

“Most elite runners will use the Nike shoe, but none of [the] studies used the Nike shoe,” Blazevich said. “The Nike shoe is the one proven to provide the significant physiological benefit. So that shoe surely needs to be studied.”

Arnold added: “Now, more than ever, we’re understanding shoes can have a pretty significant impact on performance. The performance effect of these shoes (has) been shown to be pretty consistent across people. Most people are likely to benefit from them.”

Based on the evidence, Arnold says people shouldn’t be discouraged from these shoes thinking they’re going to cause an injury.

“I would just adopt a cautious approach,” he said. “Don’t go and increase your training too quickly in these shoes, just take it slowly, because it’s more likely the sudden increase in training that’s going to cause an injury than the shoes themselves.”