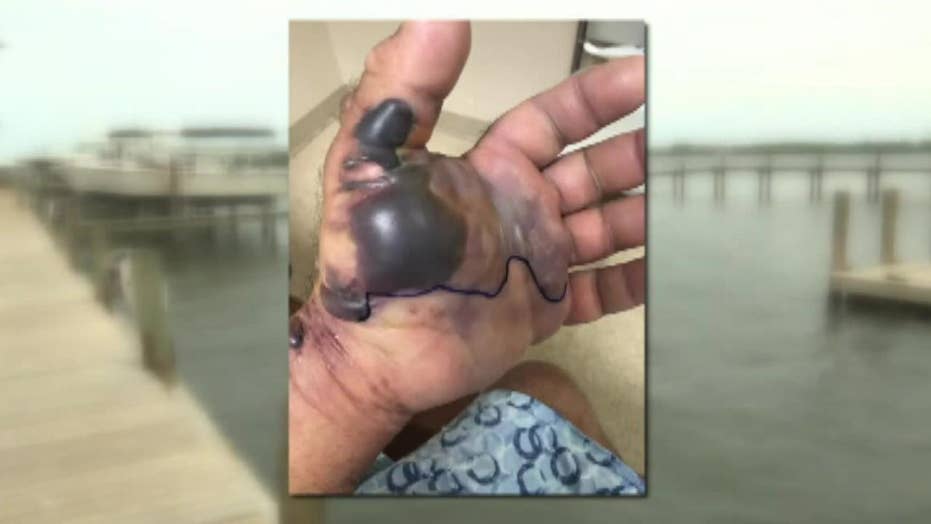 A Florida fisherman is recovering from a ‘flesh-eating’ bacteria after he was struck with a fish hook.

A fisherman in Florida is recovering after becoming infected with a “flesh-eating” bacteria during a fishing trip on Saturday.

Mike Walton, of Ozona, was fishing with friends off the coast of Palm Harbor in the Gulf of Mexico when a hook caught him in the hand, causing it to swell. He was treated with antibiotics, but soon noticed his skin blistering and turning black.

"I had like little blisters starting to form on my hand and you could watch like sweat beads coming up on side of the hand, and then they just turned black,” he told WFTS.

“This is a very rare bacteria that has only [affected] 30 people historically in a state of Florida,” his friends in the Ozona Fish Camp wrote on a GoFundMe page they set up for Walton.

Doctors warned Walton he may lose the entire arm, according to WFTS and his friends in the Fish Camp, but opted instead to open up his forearm and surgically remove much of the infected tissue.

"They sliced all the way down my arm, to relieve the pressure, and then I got a skin graft going from my elbow to the palm of my hand," he told the outlet.

“They said in a few hours this would have gone up my arm into my chest and I wouldn’t have been here. There was no saving me,” he added to Fox 13.

Walton’s friends announced on Facebook that he was discharged from the hospital on Wednesday, but said he still “has a long road ahead.”

He will remain on antibiotics for around a month, per the Associated Press.

His friends at the Ozona Fish Camp have since set up a GoFundMe page to raise funds for Walton’s medical expenses.

“Mike is a sole-provider for his family: daughter, elderly mother & father and disable sister. He works a physically demanding job as a mason, and during recovery time he won't be able to work,” they wrote.

The Ozona Fish Camp will also be hosting a fishing tournament on June 8, and setting aside part of the proceeds for Walton, WFTS reports.