Dissolvable paracetamol may be bad for your heart because it can contain more salt than a McDonald’s BIG MAC, doctors warn

Dissolvable paracetamol tablets can be bad for your heart because of their ‘hidden’ salt content, a major study has warned.

Doctors are now urging millions who rely on soluble or effervescent versions of the painkiller to check their sodium content.

Sodium — one of the main components of salt — is commonly used in dissolvable medication, which kicks in faster than swallowed pills.

But some formulations can contain one-and-a-half times an adult’s recommended sodium intake, if taken as the maximum daily dosage. This is the equivalent of nearly four McDonald’s Big Macs.

A Chinese-led team of researchers analysed medical records of 300,000 Brits who were prescribed paracetamol (acetaminophen) on the NHS.

Results showed patients on the high sodium versions of the drug were up to 45 per cent more likely to suffer a heart attack, stroke or heart failure within a year.  They were also more likely to die in that period.

Lead author Professor Chao Zeng, from Central South University in Changsha said: ‘People should pay attention not only to salt intake in their food but also not overlook hidden salt intake from the medication in their cabinet.’ 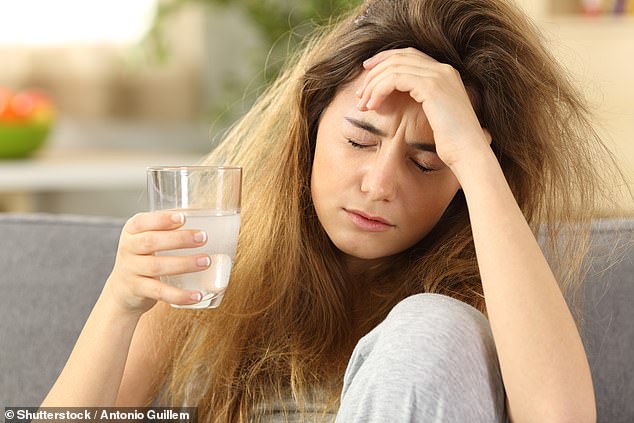 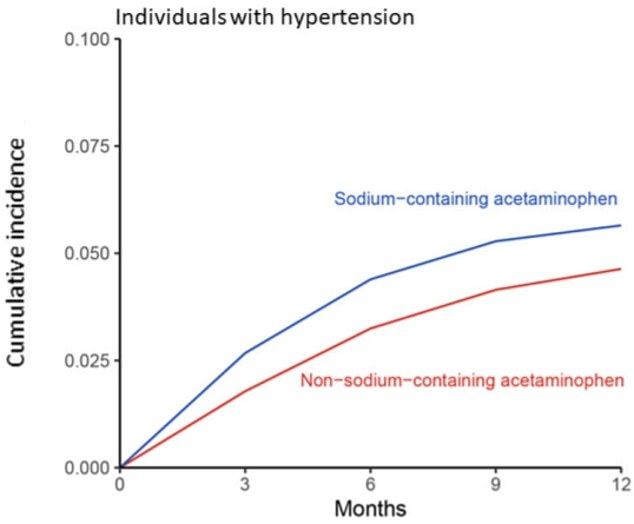 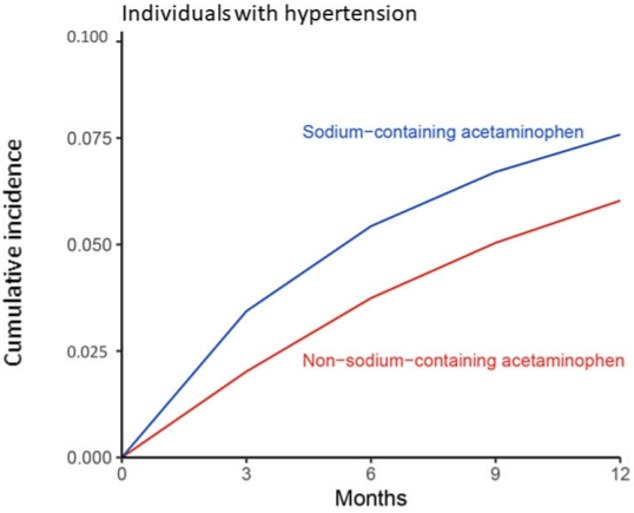 DEATH RISK IN HIGH BLOOD PRESSURE PATIENTS: This chart shows the cumulative risk of death for patients with high blood pressure when taking dissolvable paracetamol containing sodium vs a non-sodium alternative over a year 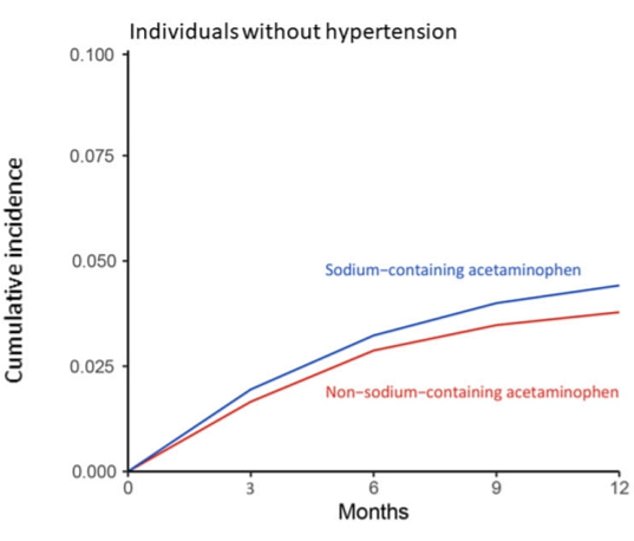 HEART DISEASE RISK IN PATIENTS WITHOUT HIGH BLOOD PRESSURE : A similar pattern for patients without high blood pressure was also observed in the study, with patients who took the sodium containing paracetamol also at a higher risk of strokes and heart attacks 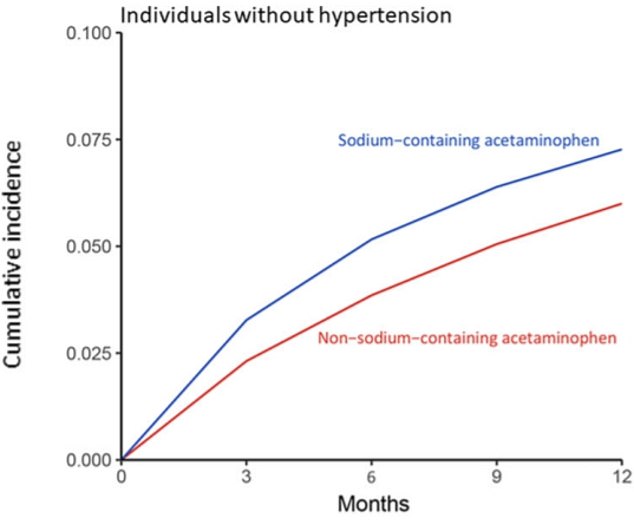 DEATH RISK IN PATIENTS WITHOUT HIGH BLOOD PRESSURE: And this chart shows the cumulative risk of death for patients without high blood pressure when taking the sodium containing painkillers, demonstrating there was still a significant added risk to health

High blood pressure, or hypertension, rarely has noticeable symptoms. But if untreated, it increases your risk of serious problems such as heart attacks and strokes.

More than one in four adults in the UK have high blood pressure, although many won’t realise it.

Blood pressure is recorded with two numbers. The systolic pressure (higher number) is the force at which your heart pumps blood around your body.

The diastolic pressure (lower number) is the resistance to the blood flow in the blood vessels. They’re both measured in millimetres of mercury (mmHg).

As a general guide:

If your blood pressure is too high, it puts extra strain on your blood vessels, heart and other organs, such as the brain, kidneys and eyes.

Persistent high blood pressure can increase your risk of a number of serious and potentially life-threatening conditions, such as:

Heart disease is one of Britain’s biggest killers, causing 160,000 deaths from  strokes heart attacks and heart failures every year — around one every three minutes.

In the US, heart disease alone kills 660,000 Americans a year, making up a quarter of all deaths.

As well as being overweight, consuming too much salt is one of the biggest causes of high blood pressure — which can lead to heart disease.

The NHS recommends that adults consume only 2.4g of sodium per day, equivalent to 6g of salt, about one teaspoon.

Effervescent paracetamol, which works quicker in liquid form as it is absorbed more quickly by the digestive system than a standard tablet , can contain up 0.44g of sodium per pill.

If taken at the maximum recommended daily dose of two tablets four times a day, a person would consume 3.5g of sodium from the tablets alone.

However, other formulations of these painkillers exist that contain an extremely small amount of sodium or none at all.

The academics, whose findings were published in the European Heart Journal, also analysed a similar-sized group of patients without hypertension.

They also included approximately 5,000 patients who were given paracetamol that contained sodium.

All of the participants were between the ages of 60 and 90 and had been prescribed the paracetamol between 2000 and 2017.

Patients with hypertension on the high sodium pills had a 5.6 per cent risk of a heart attack, stroke, or heart failure compared to 4.6 per cent in the non-sodium group.

Those taking higher sodium painkillers also had a higher risk of death, with 7.6 per cent dying in the year long monitoring period compared to 6.1 per cent in the other patient group.

Patients who had five or more prescriptions of the high sodium medication during the study were 45 per cent more likely to have a stroke, heart attack or heart failure. Just one prescription boosted the risk by 26 per cent.

Death risk by number of prescriptions dosage for the high sodium version increased by 177 per cent with one dosage and rocketed to 264 per cent for five or more.

The study also found the risk of cardiovascular disease among patients without high blood pressure when they took high sodium effervescent painkillers was 4.4 per cent, compared to 3.7 per cent in patients given an alternative.

How much paracetamol is safe to take?

The NHS recommends that that for the treatment of general aches and pains, as well as to reduce temperature that adults take a dose of 500mg of paracetamol, usually two tablets.

This does can be repeated up to four times a day, but people should wait four hours between each repetition.

Paracetamol medications for children can come in the form of both tablets or syrups.

Doses for children can vary from 2.5ml of syrup for babies between the age of three to six months, to 10ml for children between 10 to 12 years.

For tablets it can vary between 250mg per dose, to an adult dose depending on the age of the child.

Similar to adults, doses can be repeated up to four times a day but there should a four hour wait between doses.

And the risk of death among patients without hypertension one-year in to taking the pills was 7.3 per cent for those on the higher salt version compared to 5.9 per cent in lower sodium group.

Similar patterns for number of prescriptions and corresponding increase of cardiovascular disease and death were also observed in this patient group.

Professor Zeng said both medics and patients should consider moving away from prescribing or taking high sodium dissolvable paracetamol and opt for healthier alternatives.

The study was observational, meaning while an association with the salt content was spotted, it could not be proven that sodium was to blame.

There were also other limitations, such as the salt content of the patients’ diet wasn’t recorded.

It means that some patients would have been at greater or lesser risk of developing cardiovascular disease and death than others.

Additionally, while GP prescription data for medication is considered reliable, there is an obvious caveat that some patients may not have followed their dosing correctly and this may have influenced the results.

But, it is not the first study to show popping paracetamol frequently can raise the risk of heart problems.

From this they calculated that regular paracetamol use — about 4g a day, or eight standard tablets — could increase the risk of heart disease or stroke by around 20 per cent.

However, the researches have insisted taking the occasional paracetamol — known as acetaminophen in the US — to deal with a headache or fever is safe.

Responding to the latest study, Professor Tim Chico, an expert in of cardiovascular medicine, said while more research needed to be done in other patient groups to confirm the findings he would be considering the implications for his patients.

‘Unless there is a very good reason people can only swallow soluble forms of the medication, it is possible they might be safer using the non-sodium containing versions.’

Professor Sir Nilesh Samani, medical director at the British Heart Foundation said cutting down on salt consumption was a key way to reduce the risk of having a heart attack or stroke.

However, he added that taking the occasional sodium containing paracetamol should not worry people.

‘If you take paracetamol that contains sodium occasionally to manage an isolated headache or very short bouts of pain, these research findings should not cause unnecessary concern,’ he said.

Dr Richard Francis, head of research at the Stroke Association added that patients who had been prescribed these forms of paracetamol should consider making changes to reduce salt consumption.

‘People who have been prescribed salty, soluble paracetamol should have its salt content made clearer to them, try to reduce the salt content in the food they eat, work with their doctor to manage their blood pressure and try to switch to a type of paracetamol without salt’ he said.