Five times a day, psychologist Rachel Menzies gets a push notification on her phone telling her she's going to die. And she would recommend her clients do the same. "It's an old saying," she says. "To be a happy person, one must contemplate death five times daily."

You could also zip yourself into a body bag and imagine your decaying corpse. 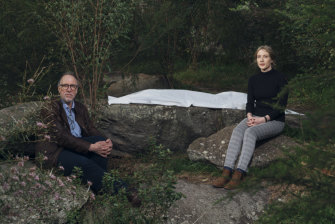 Both are practices Ms Menzies and her father, Professor Ross Menzies, say clinical psychologists could use to treat fears of death as they tour their one-day workshops about curing death anxiety around Australia.

Workshop participants watch video footage of bodies with skin marbling being eaten by maggots and other insects, and of human flesh burning inside a crematorium.

They also picture themselves surrendering to that fate in a ten-minute "corpse meditation": you visualise yourself slowly dying, taking your final breath, and then watching from above as your body decays, animals eat from it and you dissolve into the earth.

"All these tasks are meant to normalise death, and make you confront the fact it's going to happen to you," Professor Menzies says.

What is death anxiety?

All humans have an inherent drive to survive. "But we’re also probably the only species that know death is inevitable. We have a universal awareness of mortality which exists on a spectrum," Ms Menzies says.

Most people cope with their death fears day-to-day: we deal with them by extending ourselves through children, leaving a legacy through achievement, or denial.

But others can experience death anxiety at a more severe level, where normal coping methods fail them. "Fears of death bleed into their enjoyment of life and impair their functioning," Ms Menzies says.

Her research suggests that for these people, death anxiety manifests in mental health problems. She is the first researcher to demonstrate causation: that reminding individuals with mental health diagnoses of death worsens their symptoms. Someone with obsessive compulsive disorder, for example, will spend twice as long washing their hands when reminded they'll die.

"There's a really strong suggestion these individuals are desperately trying to prevent death one way or another," Professor Menzies says. "The compulsive hand washer is saying, 'I’m not going to die, there will be no germs today.' Someone else might go to emergency wards 100 times to have their heart checked."

Common phobias – of spiders, snakes, water and planes – are all potential killers. And obsessions about the body, germs and fire, often dealt with by compulsive washing, checking powerpoints or gas stoves, are also derivatives of death.

"Mental health treatments have tended to treat the specific thing someone has at the time, but no-one is really doing anything about this underlying core fear," Professor Menzies says.

"If somebody comes in with panic attacks and believes their heart will fail them, we educate them and do behavioural experiments to show their heart is fine. It looks like treatment success when they’re not having panic attacks anymore, but then they tend to come in three years later with germ contamination fears."

Addressing the dread of death

Ms Menzies' research has shown that across a person's lifetime they could come in and out of psychological treatment with different disorders which all might be derivatives of death fear.

"Cognitive behavioural therapy, which involves a mix of exposure and challenging people’s thoughts, is the only treatment that can significantly reduce people’s death anxiety," she says.

The practices taught at the death workshops are forms of exposure therapy, while the cognitive element involves challenging beliefs about death – that dying is painful, for example, or it's impossible to cope with the death of a loved one.

"Integrating death work with standard care has the potential to stop this revolving door in mental health," Professor Menzies says.