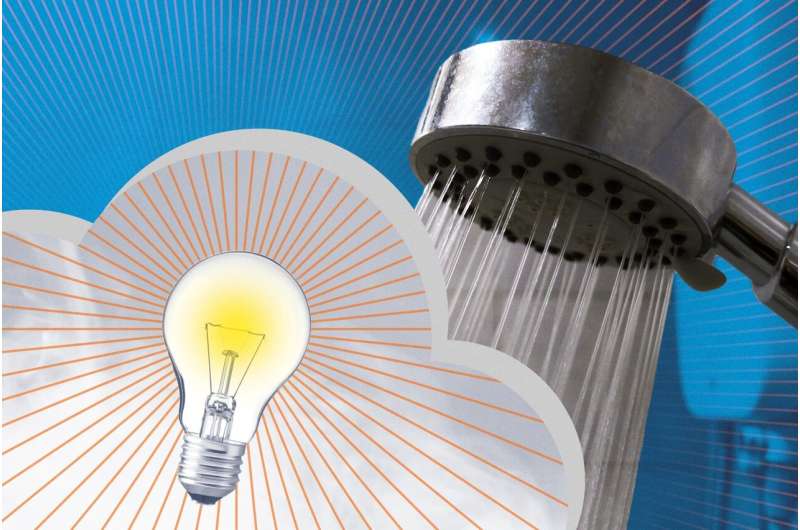 Being in the shower is the classic example. Your mind wanders. Then, all of the sudden, eureka! A new insight or creative breakthrough occurs.

Zac Irving, a University of Virginia assistant professor of philosophy, explains in new co-written research why a wandering mind sometimes comes up with creative solutions to a problem when a person is engaged in a “mindless” task.

The secret appears to be that the task at hand isn’t truly mindless. A moderate level of engagement is required.

Written with University of Minnesota psychology professor Caitlin Mills and others, the “shower effect” paper was recently published in the journal Psychology of Aesthetics, Creativity, and the Arts.

“Say you’re stuck on a problem,” Irving said. “What do you do? Probably not something mind-numbingly boring like watching paint dry. Instead, you do something to occupy yourself, like going for a walk, gardening, or taking a shower. All these activities are moderately engaging.”

The study affirms this anecdotal evidence, elevating Irving’s experimental model for the effect.

So what’s the proof? Don’t let your mind wander. This takes a little setting up.

Wandering in the wrong direction

Research published a decade ago in the journal Psychological Science seemed to confirm what many people suspected. When we perform an “undemanding” task, our brains tend to wander; and when our brains tends to wander, creativity tends to flow.

“There was this research in 2012, ‘Inspired By Distraction’ by Benjamin Baird and colleagues, that really blew up, both in terms of in science and in media and in the popular imagination, which was mind-wandering seems to benefit creativity and creative incubation,” Irving said.

Those researchers asked participants to come up with creative alternate uses for everyday items—a brick, for example—following an “incubation period” that involved tasks of various levels of mental demand. The study showed the lower the demand, the higher participants scored on the creativity test.

“Compared with engaging in a demanding task, rest, or no break,” the study’s authors wrote, “engaging in an undemanding task during an incubation period led to substantial improvements in performance on previously encountered problems.”

But follow-up studies yielded inconsistent results. Some studies seemed to find a link between mind-wandering and creativity, including among physicists and writers. Yet other studies failed to replicate the original finding that received so much press. Irving has a theory as to why.

“They weren’t really measuring mind-wandering,” he said. “They were measuring how distracted the participants were.”

Irving said another issue with the study, and others like it, is the variety of lab-friendly tasks participants are asked to perform. They may tax the mind, but they don’t translate well to the real world.

“The typical task that you use in mind-wandering research is called a Sustained Attention Response Test,” he said. “And what that test involves is, for example, seeing a stream of digits, 1 through 9, and not clicking when you see a ‘3.’ That’s the typical mind-wandering study. They’re just not like anything in people’s daily lives.”

That’s important because the shower effect likely depends on the context you’re in.

Brainstorming under a new design

To test this theory, Irving and Mills, along with their research associates, asked study participants at the University of New Hampshire to come up with alternate uses for either a brick or a paperclip. The researchers then split participants into two groups to watch different three-minute videos that would serve as the incubation models for the participants’ new creative ideas.

Another group watched a “moderately engaging” video. They saw a cheeky scene from the classic 1989 film “When Harry Met Sally,” in which Meg Ryan’s character demonstrates—while seated at a crowded restaurant—how to convincingly fake an orgasm.

“What we really wanted to know was not which video is helping you be more creative,” Irving said. “The question was how is mind-wandering related to creativity during boring and engaging tasks?”

He added, “The reason we used a video is because Caitlin is very much engaged in this movement within psychology to use naturalistic tasks”—meaning things people might do in real life.

Following the videos, participants were asked to quickly jump back into the process of listing alternate uses for the hypothetical brick or paperclip they were issued previously, working from ideas formed while watching the videos.

Participants also reported how much their minds wandered—that is, moved freely from topic to topic—during the videos.

What the researchers found is that mind-wandering helps, but only sometimes. Specifically, mind-wandering led to a greater number of ideas, but only when participants were watching the “engaging” video rather than the “boring” one.

During the engaging video, in other words, there was a positive correlation between the amount of mind wandering and the creative ideas generated. Mind-wandering made participants more creative.

The results form the basis for a model that can now be used on other types of real tasks to demonstrate how they might invite greater creative inspiration.

While the researchers may never study showering per se, for obvious reasons, they said they intend to continue to scale up from video watching. One of their future projects, for example, will use virtual reality to study mind-wandering in realistic contexts, such as walking down a city street.