Local and international health experts have called for an adolescent weight-loss study being run at Monash Children’s Hospital in Melbourne and The Children’s Hospital at Westmead in Sydney to be abandoned, claiming it poses unacceptable risks to children’s health.

The "Fast Track to Health" study, funded by the National Health and Medical Research Council, will see children as young as 13 years old follow extreme calorie restriction diets (800 calories per day) for one month. This will be followed by 12 months of low calorie dieting for half the participants, and alternate day fasting for the other half. 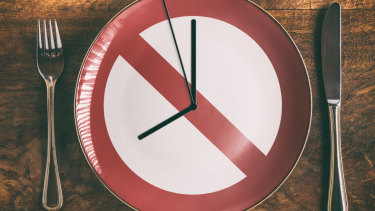 The study will see children as young as 13 follow extreme calorie restriction diets (800 calories per day) for one month.Credit:Shutterstock

Children in the fasting group would eat just 600–700 calories a day for three days a week, approximately 25–35 per cent of estimated daily energy needs. The remaining four days would be a standard healthy diet.

According to the website of the $1.2 million dollar study, the trial's aim is to "determine if MADF [Modified Alternate Day Fasting] is effective, safe and acceptable to adolescents compared to a standard weight control diet”.

In a co-signed letter to the Human Research Ethics Committee (HREC) at Sydney Children’s Hospitals, 29 health experts from Australia and the United States expressed concern that MADF is not safe or effective for children.

“The Fast Track to Health trial is of great concern to us,” clinical psychologist Louise Adams wrote in her complaint to the HREC.

“We believe that this trial poses a risk of considerable harm to the adolescent participants.”

Ms Adams, who has 20 years experience working primarily with people suffering from disordered eating and weight issues, said evidence shows dieting is a major predictor of developing an eating disorder, and adolescence is the highest risk time to expose someone to such a risk factor.

“Research tells us that kids who severely restrict their energy intake and skip meals are 18 times more likely to develop an eating disorder than those who do not diet,” she said.

The risk of study participants, who will range in age from 13 to 17, developing an eating disorder was not disputed by the researchers or the ethics committee which dismissed the health professionals’ complaint.

In responding to the complaint, Ms Asra Gholami, executive officer of research ethics at Sydney Children’s Hospitals Network, wrote: “The HREC recognises that there is a risk for a young person to develop an eating disorder with exposure to restrictive diets, and in particular very restrictive diets. Although these risks appear to be lower in medically supervised dieting programs, they will still be present.”

Ms Gholami said the risk of children developing an eating disorder – a condition that has the highest mortality rate of all mental illnesses – is justified because of the potential for the participants to lose weight.

As Ms Gholami concedes in her written response to the complaint: “there is evidence that MADF [Modified Alternate Day Fasting] achieved weight loss in adults, they do not claim the losses are long term”.

US medical doctor, and author of Helping Your Child With Extreme Picky Eating, Dr Katja Rowell is concerned parents who are not fully informed of the risks of the study, and the extensive body of research that shows that weight loss diets fail to achieve long term weight loss, will enrol their child thinking it will help them.

“We know from our best quality evidence that weight lost through diets is regained virtually across the board,” said Dr Rowell

“Dieting in teens is linked to increased depression, and is a major risk factor for the development of eating disorders, which are costly and involve incredible suffering and the highest mortality of any mental illness.

"While there is concern about 'childhood obesity', the panic to just do something should not mean we ignore the very real risks with this kind of trial."

Despite the HREC acknowledging the risks and limitations of the study in correspondence with health professionals, this information is not given to the parents when signing their child up for the study.

In the participant information sheet, parents are told: "We do not expect any side effects or risks associated with this study. If the study makes your child feel upset, you or your child may stop the study at any time. You will be provided with information and contacts your child can talk to, if that is what they want to do.”

Ms Adams said researchers should not risk the mental and physical health of more children in an attempt to add to the already enormous catalogue of evidence of harm.

“These are real people we are dealing with, not guinea pigs," she said.

The Fast Track study researchers have been contacted for comment.