"Is Gardasil 9 right for me?" my patient asked during a recent office visit.

Ten years ago, L – I'm referring to her by her first initial to protect her privacy – brought her then preteen daughter to a pediatrician to get her immunized against HPV. 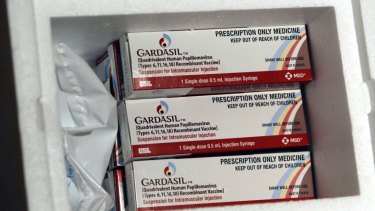 Routine vaccination of teens with Gardasil has dramatically reduced the rates of infection with the virus that can be the precursor to cervical cancer.Credit:Peter Rae

"I asked the pediatrician whether I should also get the shot because it did not exist when I was a kid," L said. "She told me I was too old."

But recently some of L's 40-something friends have had their first-ever abnormal Papanicolaou (PAP) smear and tested positive for "high-risk" HPV. They've needed regular visits to the gynecologist for colposcopy (an examination of the cervix using a microscope) with uncomfortable cervical biopsies, an ordeal L wants to avoid.

Querying Dr. Google, she learned that condoms are not an effective prevention against HPV but noticed that the Food and Drug Administration had expanded the use of Gardasil 9 to include women up to age 45. While insurance won't cover the three-shot series for her age group, she is ready to pay the steep $600-plus vaccine cost – but only if I, her physician, think the investment is worthwhile.

I didn't know what to tell her but I decided to do some digging.

At this point, it's pretty clear that if you get the HPV vaccine series before ever having sex, it works really well. A review of 26 randomized controlled trials shows that giving the vaccine to preteen and teenage girls before they become sexually active will protect them from genital warts and HPV-related precancers that show up on PAP screening.

Does the vaccine make sense for 'L' and 30 million other women under 46 who missed the opportunity to get the HPV shots as kids?

(There is a consensus that giving the HPV vaccine to boys will also prevent HPV-related cancers, although males are not the focus of this report.)

I also know the vaccine is safe; in the review of the HPV studies, severe adverse events were rare and were not significantly higher in vaccine recipients than in those who received a placebo injection.

But L had a number of partners in her early 20s followed by many years of monogamy. Does the vaccine make sense for her and the roughly 30 million other women under 46 who missed the opportunity to get the HPV shots as kids? After all, studies show that most women get exposed to at least one strain of HPV within a couple of years after first having sex and that the likelihood of exposure increases with each sexual partner. While most women clear their infections within 12 to 24 months, a small percentage go on to develop cervical precancers or cancers – which is why cervical cancer screening is important.

To answer L's question, I looked up the guidelines for HPV vaccination put out by the Center for Disease Control and Prevention's Advisory Committee on Immunization Practices (ACIP), a group of medical experts that determines which vaccines we should use in the United States. Despite the FDA's recent approval of the vaccine for women up to age 45, I saw no mention of women over age 26 in the ACIP guidelines.

Then I moved to the American College of Obstetrics and Gynecology website to see what it said about HPV vaccination for older women. ACOG's Practice Advisory encourages me to "welcome conversations" with women up to age 45 and that "any decision to be vaccinated should be individually based using shared decision making and clinical judgment based on those patients' circumstances, preferences, and concerns."

To get some clarity on ACOG's recommendations, I called Lois Ramondetta, professor of gynecologic oncology at the University of Texas MD Anderson Cancer Center. She is on the ACOG HPV immunization expert working group. She said that the ACIP was doing a cost-benefit analysis and would soon decide whether to recommend the HPV vaccine up to age 45. But she agreed that, at the moment, there is plenty of confusion about which older women would benefit.

"Perhaps it would be very useful for someone who hasn't been exposed, and who's intimacy situation has changed," she told me.

Measuring exposure to HPV is tricky. The only option in my lab is to do a cervical swab to test for high-risk HPV genotypes including HPV 16 and 18 – the two strains that cause over 70 percent of HPV-related cancers. This is a great test for diagnosing active infection with HPV but doesn't measure past exposure or latent HPV infections. (To measure these, I would need an antigen test, which is only available in research labs.)

How is it that the vaccine can prevent infection in older women but does not seem to protect against cervical cancer?

But combing through the data from VIVIANE, one of two big drug industry funded studies to measure the effectiveness of HPV vaccine in older women, I realized that the vaccine was about 80 percent effective at preventing infection with HPV 16 and 18 in women whose cervical swabs were negative for these strains, regardless of past exposure. That sounded pretty good to me. As long as L was HPV genotype 16 and 18 negative, maybe she should get the vaccine.

Not so fast, cautioned Karen Smith-McCune, professor emeritus of obstetrics and gynecology at the University of California at San Francisco. She is an HPV researcher and works in the cervical dysplasia clinic taking care of women infected with HPV.

"When you look at these studies, you have to ask: 'Effective for what?' If your goal is to prevent cancer, we have no proof the vaccine does that in the older age group," she said.

It was true that older women who received the HPV vaccine became infected with HPV 16 and 18 at a lower rate than the women who were unvaccinated. But the advanced precancers, the ones most likely to go on to become cancer, were rare in both the vaccinated and unvaccinated groups, and the difference was not statistically significant.

How is it that the vaccine can prevent infection in older women but does not seem to protect against cervical cancer?

Smith-McCune has a variety of explanations for this, including that new HPV infection in older women may simply be a reactivation of latent infection and less likely to progress to cancer.

"The take-home message is that cervical cancer is really rare in older women who get regular screenings and [the HPV] vaccine adds little in terms of prevention," Smith-McCune said.

And what about avoiding costly and uncomfortable colposcopies and biopsies, something that the vaccine did accomplish in younger women – especially those who had never had sex.

Well there were slightly fewer of these procedures in the older women who received the vaccine, but not an amount that was statistically significant.

So what is the best choice for L?

"If she is a 40-something-year-old virgin who decides to start dating, the vaccine will be 100 percent effective," Smith-McCune said. "But beyond that, let's vaccinate adolescents, that is where you have the public health impact."

Smith-McCune added that L should get the recommended cervical cancer screening up to age 65, which means getting a PAP plus HPV test every five years, or a PAP every three years.

At this point, I was pretty sure what I would say to L and other women her age: "The HPV vaccine is unlikely to help but, aside from cost, there is no big downside to getting it."

But then I learned that there is a global shortage of HPV vaccine. According to the World Health Organization, the two manufacturers, Merck and GlaxoSmithKline, are not producing enough. And while there are plans for other pharmaceutical companies in China and India to pick up the slack, right now only 20 percent of countries with the highest rates of cervical cancer are able to immunize girls who are 9 to 14 years old, the age group where the vaccine is known to be most effective.

If you are a woman in your mid-40s who is suddenly thrown back on the dating scene, the best strategy is use condoms.

Given the limited supply and the lack of evidence that the vaccine protects older women from colposcopies or cervical cancer, I agree with Smith-McCune: Let's leave the vaccine for the teens and preteens. And if you are a woman in your mid-40s who is suddenly thrown back on the dating scene, the best strategy is use condoms (because they do protect against other sexually transmitted infections) and get regular cervical cancer screening.

I called L to share what I had learned. She had done some of her own research and came to pretty much the same conclusion.

She was also considering a donation to Gavi, an international organization which gets vaccines to places they are most needed. To me, that sounded like a great way to spend $600.

Dr Miller is a family physician and author of Farmacology and The Jungle Effect.