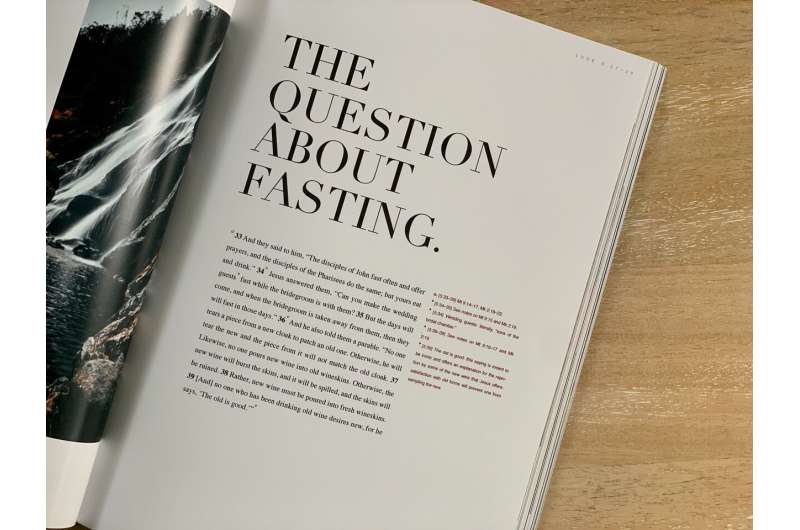 Researchers at Baylor College of Medicine have found more evidence that dry fasting (fasting without food or liquid intake) from dawn to dusk can play an important role in overall health. In a new study published in Metabolism Open, researchers found that fasting from dawn to dusk for four weeks has an anti-atherosclerotic, anti-inflammatory and anti-tumorigenic effect on the proteins in a type of immune cell called a peripheral blood mononuclear cell (PBMC).

“We know that disruptions of the circadian rhythm are associated with cancer and metabolic syndrome. This type of fasting can potentially act as a reset to normal for the circadian rhythm,” said Dr. Ayse Leyla Mindikoglu, corresponding author of the study and associate professor in the Margaret M. and Albert B. Alkek Department of Medicine, Section of Gastroenterology and Hepatology and the Michael E. DeBakey Department of Surgery, Division of Abdominal Transplantation at Baylor. “After fasting, our participants lost weight, and their blood pressure and insulin resistance improved.”

The researchers previously found similar results in blood serum. The current study used samples from the previous study examining 14 people with metabolic syndrome, a group of conditions including obesity, insulin resistance (elevated blood glucose levels), elevated blood pressure, high triglycerides (a type of blood fat) and low high-density lipoprotein cholesterol (good cholesterol). These conditions can lead to an increased risk of cardiovascular disease and cancer. The participants were observing the month of Ramadan, which consists of fasting for four consecutive weeks without eating or drinking from dawn to sunset. Outside of fasting, participants were allowed to eat whatever they preferred and were not required to follow any exercise regimen or weight loss measures.

Participants gave blood samples before the fasting period began, at the conclusion of fasting and one week after fasting was completed. The research team used mass spectrometry techniques to examine the proteome of PBMCs in the blood. They found that proteins associated with atherosclerosis, heart disease and cancer promotion were decreased, while proteins associated with cancer and inflammation suppression were increased. They found that apolipoprotein B, which is a more accurate risk predictor for developing atherosclerotic heart disease than low-density lipoprotein (LDL) cholesterol, was significantly decreased at the end of four-week dawn-to-dusk dry fasting compared with its level before fasting, and its decrease persisted even one week after the fasting period.

“The findings of this study are important because we were able to confirm the favorable effect of dawn-to-dusk dry fasting at the cellular level,” Mindikoglu said. “This is the first time that this type of investigation into the proteome of immune cells has been done in subjects with metabolic syndrome who fasted from dawn to dusk.”