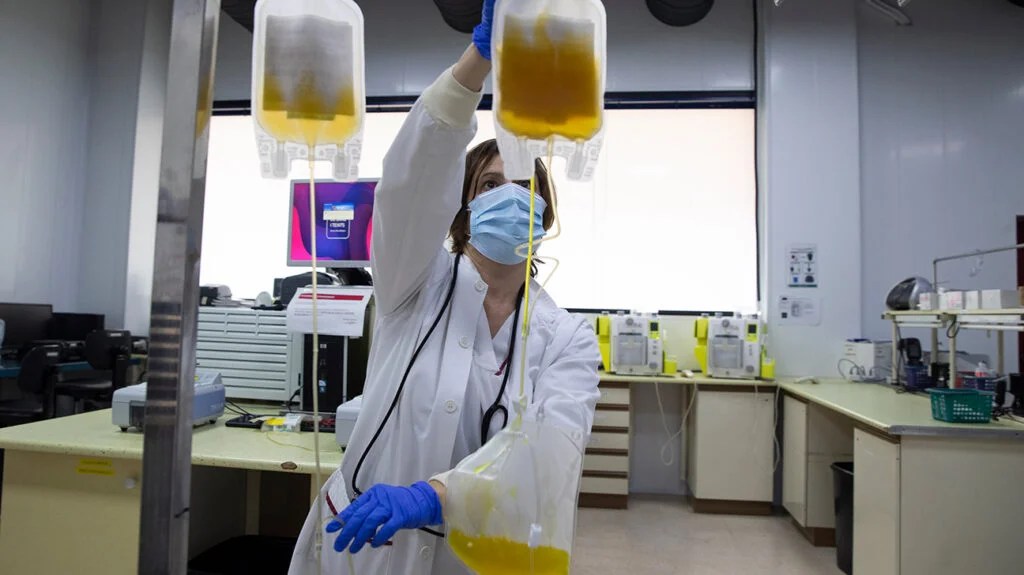 Healthcare professionals have been using plasma from patients who have fought off an infection, known as convalescent plasma or passive antibody therapy, for almost a century to combat bacterial and viral infections, including influenza and Ebola.

In August 2020, the Food and Drug Administration (FDA) issued an emergency use authorization, which was updated in February 2021, for convalescent plasma to treat patients hospitalized with COVID-19.

In the United States alone, around half a million people with COVID-19 had received the treatment by March 2021.

In May 2021, however, the RECOVERY trial and a review of research reported that convalescent plasma provided little or no benefit for patients hospitalized with COVID-19.

A newly published clinical trial that involved 129 sites in Australia, Canada, the U.S., and the United Kingdom has now added further evidence that the treatment does not improve the survival chances of critically ill patients.

The trial, which was part of the ongoing REMAP-CAP trial, randomized 2,011 critically ill patients with confirmed COVID-19 to receive either convalescent plasma or normal care.

The researchers ended the trial after concluding that the treatment did not reduce the number of days that patients remained alive and free of organ support, with a “probability of futility” of 99.4%.

The mortality rate was 37.3% for the convalescent plasma group, and 38.4% for the controls. The median number of days alive and free of organ support was 14 days in both groups.

The study appears in the journal JAMA.

“Finally, with these results, we can put an end to using convalescent plasma for our sickest COVID-19 patients and focus on treatments that we know work, as well as developing and testing better ones,” says co-lead author Dr. Bryan McVerry, M.D., an associate professor of pulmonary, allergy, and critical care medicine at the University of Pittsburgh School of Medicine and a critical care physician at the University of Pittsburgh Medical Center.

Too late to benefit from antibodies

However, proponents of convalescent plasma therapy told Medical News Today that the treatment is unlikely to benefit patients in the later stages of the condition, when the main threat to their survival is not the virus itself but the body’s excessive inflammatory response.

“COVID-19 has two phases: a viral phase, during which the illness and damage the patient experiences is due to viral replication, and an inflammatory phase, triggered by the patient’s immune response to the virus, during which damage is the result of the immune response, often with viral replication no longer detectable,” said Dr. Liise-anne Pirofski, M.D., professor of infectious diseases at the Albert Einstein College of Medicine in New York.

“Since convalescent plasma efficacy depends on its antiviral activity, it should not be expected to be effective in patients with severe disease indicative of the inflammatory phase,” she added.

The treatment did appear to benefit patients with weakened immunity, although the numbers were too small for the researchers to reach a definitive conclusion.

“It could be that patients with an impaired immune system, who are unable to mount an effective immune response, could still benefit from the antibodies present in blood plasma from COVID-recovered patients, especially early on in the illness,” says corresponding author Dr. Lise Estcourt, M.D., an associate professor of hematology and transfusion medicine at the Radcliffe Department of Medicine at the University of Oxford and director of the U.K.’s National Health Service Blood and Transplant Clinical Trials Unit.

“This is something that definitely warrants investigation,” she adds.

Dr. Arturo Casadevall, M.D., Ph.D., who chairs the Molecular Microbiology and Immunology Department at Johns Hopkins Bloomberg School of Public Health in Baltimore and who was not involved in the new research, told MNT that antibody therapies are unlikely to benefit most critically ill patients.

He said, however, that several recently published studies suggest that convalescent plasma is effective if administered early in the course of the infection and if it contains sufficiently high concentrations, or “titers,” of antibodies against the virus.

For example, a 2021 study found a 47% reduced risk of death if patients received the treatment within 3 days of admission to the hospital.

Another study, published in The New England Journal of Medicine, found that older adults who received treatment within 3 days of the onset of mild symptoms were 60% less likely to develop severe respiratory disease.

“Bottom line – there is considerable evidence that convalescent plasma can reduce mortality if used early and with high titer,” Dr. Casadevall told MNT.

His own research, published in eLife, estimates that the treatment saved approximately 95,000 lives in the U.S. between July 2020 and March 2021, when it was still in widespread use.

More recently, the U.S. and the U.K. have given the green light for monoclonal antibodies to treat and prevent COVID-19.

The World Health Organization (WHO) recommends the treatment for patients at highest risk of hospitalization who do not yet have severe COVID-19 and for patients with severe or critical illness with weakened immunity.

Prof. Estcourt told MNT that convalescent plasma may be beneficial in settings where monoclonal therapy is unavailable.

“However, the convalescent plasma used will need to have much higher antibody levels than have previously been produced,” she said.

“This may be possible using plasma from people who have had both a natural infection and been vaccinated, as they have much higher antibody levels,” she added.

The authors of the new paper note a limitation of their study in this regard.

Although they gave most participants very high-titer convalescent plasma, they did not conduct lab tests to assess the ability of antibodies in the plasma to neutralize the virus.