Brazilian twins who were joined at the head have been successfully separated with the help of a British neurosurgeon.

Bernardo and Arthur Lima were born with fused brains.

Almost 100 medics operated on the three-year-olds, who spent 27 hours under the knife during the final surgery.

It was one of the most complex separation processes ever completed, according to Dr Jeelani’s charity Gemini Untwined, which funded it.

Ahead of the life-changing op, surgeons from London and Rio spent months trialling techniques using VR projections of the twins based on CT and MRI scans — which Dr Jeelani described as ‘space-age stuff’. 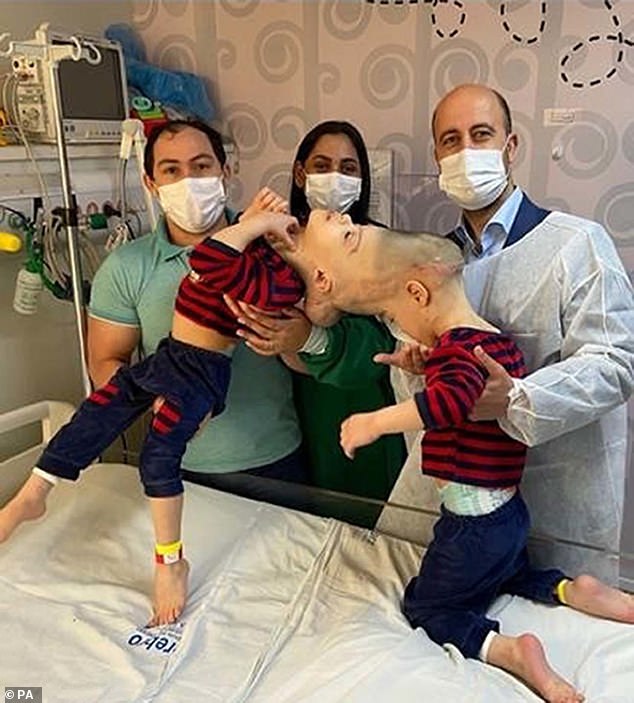 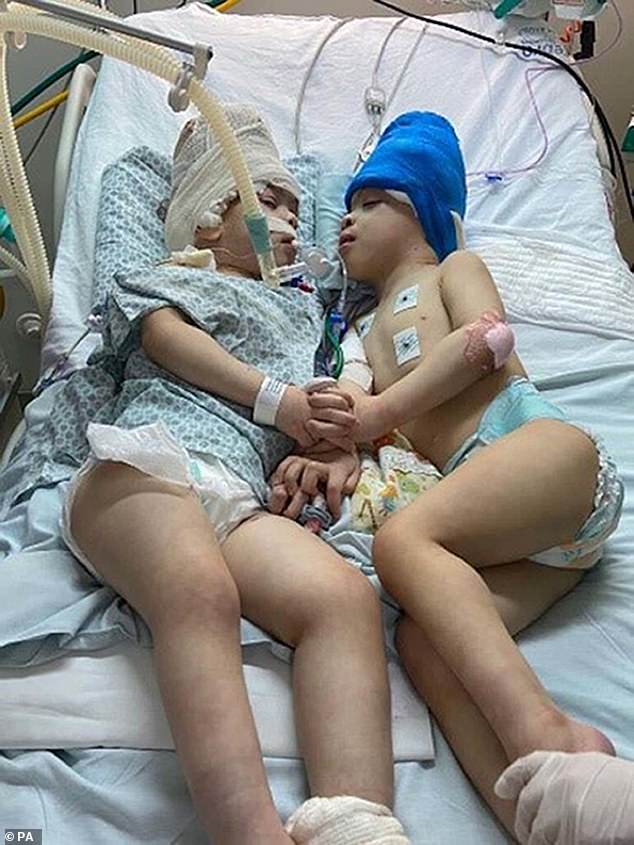 The three-year-olds (pictured after the surgery) had seven surgical procedures, involving more than 27 hours of operating time in the final operation alone, and almost 100 medical staff 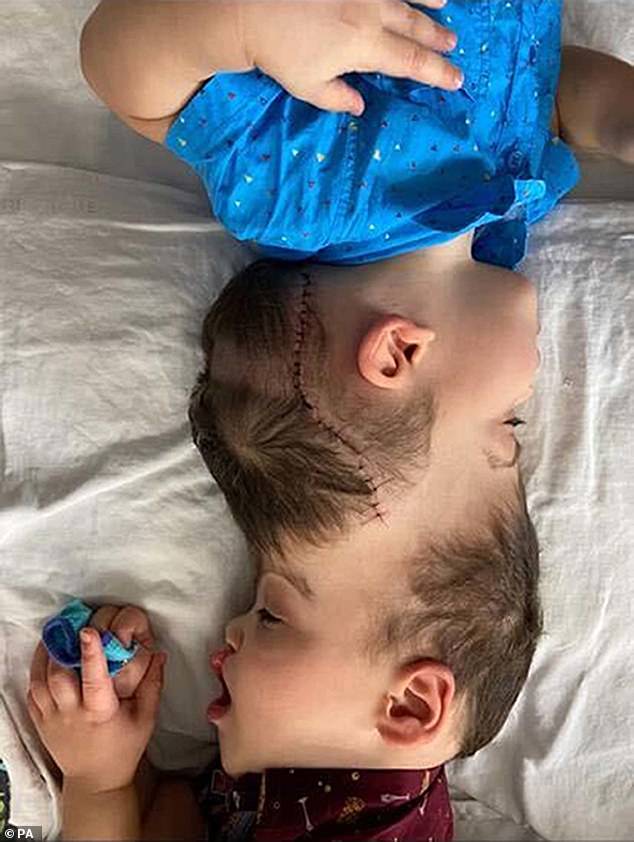 It was one of the most complex separation processes ever completed, according to the charity which funded it and which Mr Jeelani founded in 2018 – Gemini Untwined. Pictured: Bernardo and Arthur Lima before the surgery

The surgical separation of conjoined twins is a delicate and risky procedure, requiring extreme precision and care.

Therefore, the decision to separate twins is a serious one.

Mortality rates for twins who undergo separation vary, depending on their type of connection and the organs they share.

In cases where the pumping chambers of their hearts are conjoined, there are no known survivors.

Although success rates have improved over the years, surgical separation is still rare.

Since 1950, at least one twin has survived separation about 75 percent of the time.

It is only after twins are born that doctors can use MRI scans, ultrasound and angiography to find out what organs the twins share. In order to determine the feasibility of separation, doctors must carefully assess how the twins’ shared organs function.

After separation, most twins need intensive rehabilitation because of the malformation and position of their spines.

The muscles in their backs are constantly being flexed and they often have a difficult time bending their backs forward and backwards and sitting up straight.

‘It’s really great to see the anatomy and do the surgery before you actually put the children at any risk.

‘You can imagine how reassuring that is for the surgeons.

‘In some ways these operations are considered the hardest of our time, and to do it in virtual reality was just really man-on-Mars stuff.’

He said, for the first time in the world, surgeons in separate countries wore headsets and operated in the same ‘virtual reality room’ together.

He said that previously unsuccessful attempts to separate the boys meant their anatomy was complicated by scar tissue, and he was ‘really apprehensive’ about the risky procedure.

Dr Jeelani said he was ‘absolutely shattered’ after the final 27-hour operation, where he took only four 15-minute breaks for food and water.

But it was ‘wonderful’ to see the family feeling ‘over the moon’ afterwards, he said.

‘There were a lot of tears and hugs,’ he said. ‘It was wonderful to be able to help them on this journey.’

He added that, as with all conjoined twins after separation, the boys’ blood pressures and heart rates were ‘through the roof’ — until they were reunited four days later and touched hands.

Dr Jeelani said they were recovering well in hospital and face six months of rehab.

He said his charity has become a ‘global repository for knowledge and experience’ of separation surgery, and he hopes it will serve as a model for a ‘global health service’ providing expert care in other rare diseases.

Dr Jeelani added: ‘The idea behind the charity was to create a global health service for super-rare cases to try and improve results for these kids.

‘The model of what we have done, I think, can and should be replicated for other super-rare conditions.’

This was Dr Jeelani’s sixth separation procedure with Gemini Untwined, after previously operating on twins from Pakistan, Sudan, Israel, and Turkey.

He led the procedure alongside Dr Gabriel Mufarrej, head of paediatric surgery at Instituto Estadual do Cerebro Paulo Niemeyer in Brazil.

Dr Mufarrej said the hospital where he works has been caring for the boys for two-and-a-half years, and their separation will be ‘life-changing’.

He said: ‘Since the parents of the boys came from their home in the Roraima region to Rio to seek our help two-and-a-half years ago, they had become part of our family here in the hospital.

‘We are delighted that the surgery went so well and the boys and their family have had such a life-changing outcome.’

As Bernardo and Arthur are almost four years old, they are also the oldest craniopagus twins with a fused brain to have been separated.

According to Gemini figures, one in 60,000 births result in conjoined twins, and only 5 per cent of these are joined at the head – known as craniopagus children.

It is estimated that 50 such sets of twins are born around the world every year.

Of them, it is thought only 15 survive beyond the first 30 days of life.

With current technologies, which the charity aims to make more accessible, approximately half of these cases would be candidates for successful surgical separation.