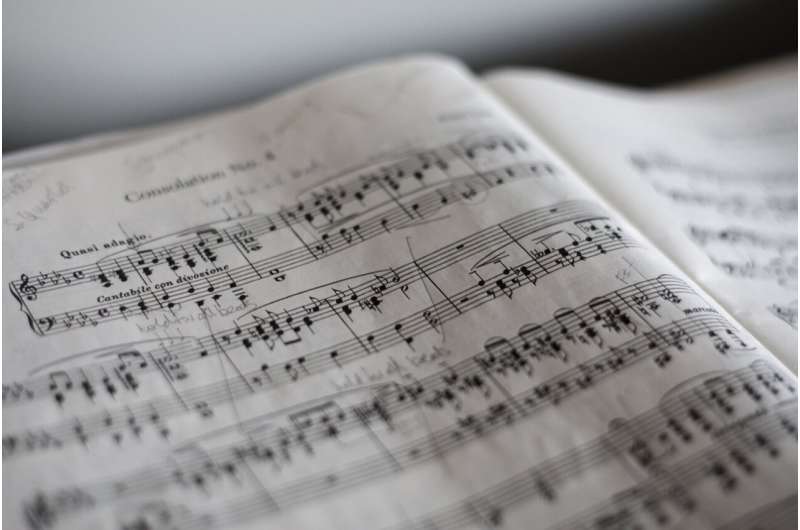 In the past, many neuroscientists have investigated the potential therapeutic value of classical music and other types of music or sounds for alleviating some of the symptoms or deficits associated with different neuropsychological disorders. While some studies have suggested that listening to classical music and white noise could improve cognitive function, these effects are still poorly understood.

Researchers at the Monash Medicine Discovery Institute and Monash University in Australia have recently carried out a study specifically exploring the possibility that classical music and white noise could positively impact people’s ability to process conflicting information. Their findings, however, published in Frontiers in Neuroscience, suggest that these two auditory stimuli have no benefits for this specific cognitive function.

“To better understand how the processing of certain acoustic properties can influence conflict processing, we had a large of cohort of undergraduate students complete the Stroop color and word test (SCWT) in three different background conditions: classical music, white noise, and silence,” Alexander J. Pascoe and his colleagues told Medical Xpress. “Because of pandemic guidelines and the necessity to run the experiment remotely, participants also completed the Wisconsin card sorting test (WCST), so that the reliability and consistency of acquired data could be assessed.”

The 67 undergraduate students who participated in the researchers’ study were asked to complete two different tests (i.e., the SCWT and the WCST) either in silence, while listening to white noise, or classical music. The SCWT is a widely used neuropsychological test that assess a person’s ability to process specific stimuli while presented with conflicting stimulus attributes. This typically entails naming the color of fonts, even if these fonts are used to spell out inconsistent color words (e.g., green, red, blue).

The WCST is another test often used to measure executive functioning, particularly people’s abstract reasoning and cognitive flexibility skills. In this test, people are asked to match different cards based on a ‘rule’ that is unknown to them and that changes several times during the experiment.

“We found that white noise, but not classical music increased the response time difference between congruent (low conflict) and incongruent (high conflict) trials (conflict cost), hence impairing performance,” Pascoe and his colleagues explained in their paper. “Results from the WCST indicated that home-based data collection was reliable, replicating a performance bias reported in our previous laboratory-based experiments. Both the auditory stimuli were played at a similar intensity, thus their dissociable effects may have resulted from differing emotional responses within participants, where white noise, but not music elicited a negative response.”

Essentially, the findings gathered by Pascoe and his colleagues suggest that neither classical music nor white noise led to an improvement in the participants’ ability to process conflicting stimuli (i.e., they did not lead to better performances in the SCWT and WCST test). White noise, however, appeared to negatively affect the performance of participating students, making it harder for them to process conflicting stimuli.

“Integrated with previous literature, our findings indicate that outside of changes in tempo and valence, classical music does not affect cognitive functions associated with conflict processing, whilst white noise impairs these functions in a manner similar to other stressors, and hence requires further research before its implementation into neuropsychiatric care,” Pascoe and his colleagues added in their paper.