Does HPV raise the risk of heart disease? Carriers of the virus are ‘20% more likely to be struck down by the world’s leading killer’

Having human papillomavirus (HPV) raises women’s risk of heart disease by 20 per cent, according to a study.

The virus, which 80 per cent of people catch at some point during their life, is spread by close contact such as sexual activity and is the most common STI in the US and UK.

Some HPV strains are already known to cause cancer – but now evidence suggests they raise the risk of heart disease, too.

Heart disease remains the number one killer in the UK, and is estimated to account for 30 per cent of deaths globally, according to HEART UK. 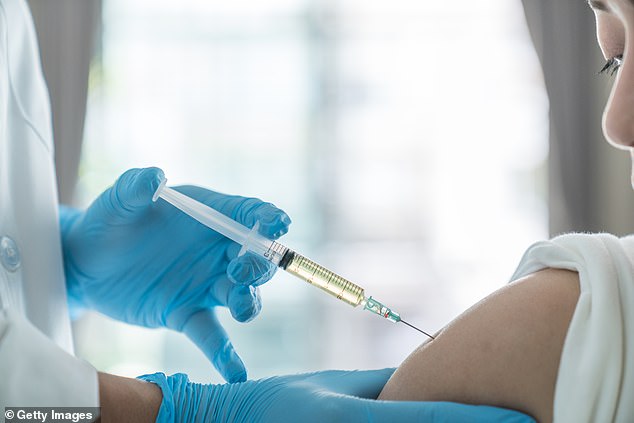 Human papillomavirus (HPV) raises women’s risk of heart disease – the world’s leading killer – by 20 per cent. Vaccination rates are low, despite HPV being known to cause cancer

Researchers examined data for 63,411 Korean women aged 30 or over who did not have heart disease at the start of the study.

Just over seven per cent of the women, who were studied from 2011 to 2016, had high-risk HPV infections, the scientists said.

The results, published in the journal Circulation Research, show those women with the high-risk strains were 22 per cent more likely to suffer heart disease.

And the findings remained true when known risk factors, such as smoking, exercise levels and obesity were taken into account.

Further analysis found women with HPV who were obese or suffering from metabolic syndrome – a cluster of conditions such as high blood pressure, excess weight around the waist and high cholesterol – had an even higher risk.

WHAT IS HPV? THE INFECTION LINKED TO 99% OF CERVICAL CANCER CASES

Human papilloma virus (HPV) is the name for a group of viruses that affect your skin and the moist membranes lining your body.

Up to eight out of 10 people will be infected with the virus at some point in their lives.

There are more than 100 types of HPV. Around 30 of which can affect the genital area. Genital HPV infections are common and highly contagious.

Many people never show symptoms, as they can arise years after infection, and the majority of cases go away without treatment.

It can lead to genital warts, and is also known to cause cervical cancer by creating an abnormal tissue growth.

Annually, an average of 38,000 cases of HPV-related cancers are diagnosed in the US, 3,100 cases of cervical cancer in the UK and around 2,000 other cancers in men.

HPV can also cause cancers of the throat, neck, tongue, tonsils, vulva, vagina, penis or anus. It can take years for cancer to develop.

Those who were obese with HPV were around two-thirds more likely to end up having heart disease, the researchers found.

And those with metabolic syndrome were twice as likely to develop it, according to the team at Kangbuk Samsung Hospital in Seoul.

Jeremy Pearson, associate medical director at the British Heart Foundation, said: ‘The research shows that HPV infection in younger Korean women is associated with a slightly higher risk of cardiovascular disease, particularly in those who are obese.

‘This raises the possibility that HPV infection directly leads to increased cardiovascular risk through an unknown mechanism, but the results from an HPV vaccination trial would be needed to prove it.’

Figures suggest 80 per cent of people will catch HPV during their life – with around a third of British adults thought to be carriers. And 14million Americans are estimated to be struck down with it each year.

HPV, of which there are more than 100 types, a group of viruses that affect your skin and the moist membranes lining your body.

Around 30 strains of HPV can affect the genitals, of which 13 are considered ‘high risk’ because they can lead to cervical cancer.

But HPV vaccinations rates have plummeted globally – to as low as one per cent in some countries – due to largely unfounded fears that the jab causes disability.

Last summer, the Government promised to roll-out the vaccines to boys against the virus, which can cause cancer of the penis and anus. The life-saving jabs have been given to teenage girls since 2008.

IS THE HPV JAB SAFE? HOW THE CONTROVERSY HAS LED TO A DROP IN VACCINATION RATES

WHO IS GIVEN THE JAB?

All girls aged between 12 and 18 are are offered a free vaccination against HPV by the NHS to help protect them against cervical cancer under a programme launched by UK health officials in 2008. However, boys aren’t given the jab.

In the US, the CDC recommends for all children to receive the vaccine, which was approved by the FDA in 2010, between the ages of nine and 12. Catch-up jabs are then available for men up to the age of 21 and women up to 26.

It’s estimated that about 400 lives could be saved every year in the UK as a result of vaccinating girls – while around 30,000 cases of cancer could be avoided in the US each year with the jab, according to figures.

However, a wave of allegations over the controversial HPV jab has caused vaccine rates to plummet to as low as 1 per cent in some countries.

Anti-vaccine campaigners have the slump, which has badly affected Japan, which had a vaccine rate of 70 per cent just four years ago.

They have posted hundreds of unsourced videos online featuring girls in wheelchairs that they claim have been disabled by the jab.

The downturn in vaccination rates came after an allegedly fake study on mice linked the vaccine to neurological issues.

However, the world’s leading health officials have repeatedly slammed anti-vaxxers for ‘promoting pseudoscience’.

Government authorities agree there is no evidence to support a link between HPV vaccination and chronic illnesses.

They concluded there is ‘no credible evidence of a link between the HPV vaccine and a range of chronic illnesses’.

They warn the vaccine has been proven to be safe in more than 10 years of studies, and it is essential for preventing dozens of HPV-linked cancers.

And last year, the revered John Maddox prize for ‘sense about science’ was awarded to a Japanese researcher who debunked the jab claims.

HOW MANY SIDE EFFECTS HAVE THERE BEEN?

English health officials received 3,972 ‘yellow cards’ – warnings of side effects – between 2010 and 2013 for the controversial HPV jab Gardasil.

In Europe, 11,867 reactions to Gardasil have been recorded up to February 2017, according to The European Medicines Agency.

Many report symptoms of chronic fatigue syndrome, and cases of girls being left paralysed are rare. Fatalities have occurred, reports also showed.