The Government must step in to end an NHS price war over a drug which could extend thousands of British children’s lives, campaigners say.

Orkambi, a medication which can almost halve the speed of lung damage in patients with cystic fibrosis, is not available in the UK because it’s so expensive.

Its manufacturer, Vertex, and the NHS have been locked in a three-year discussion over the drug, which costs £105,000 per patient per year.

An MP is today expected to ask the Government to override the patent on the drug so it can be made cheaply.

And patients have written to Prime Minister Theresa May revealing their ‘sheer dread’ at their children’s suffering if they can’t get access to Orkambi. 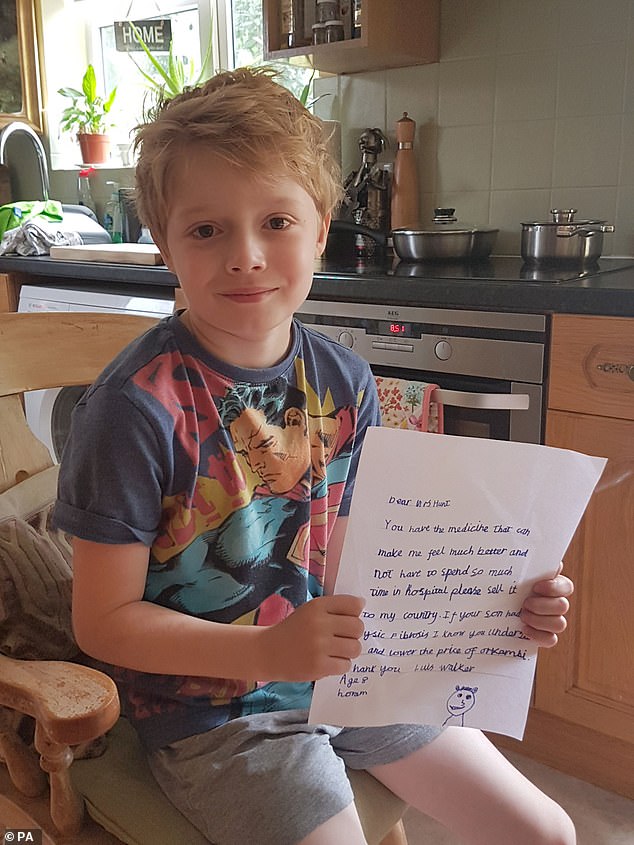 Luis Walker, eight, from Horam in East Sussex, last year wrote to the drug firm Vertex to urge them to make Orkambi cheaper so he can use it to halt the progress of his cystic fibrosis

It is refusing to budge on its price and last year turned down the NHS’s offer of £500million for a five-year supply of the drug – the biggest offer the health service has ever made.

Dr Andrew Hill at the University of Liverpool, said a generic version of the drug could be made for as little as £5,000 per patient per year.

But this will require the Government to scrap Vertex’s patent on the medicine using legislation from 1977 – a rare occurrence.

Christina Walker is the mother of eight-year-old Luis, who has cystic fibrosis, a disease which makes sticky mucous to build up in the lungs and other organs.

‘I see Luis struggling for breath every day,’ the mother from East Sussex said.

‘It is heartbreaking to know that Luis will get more and more poorly as time goes on.

‘Meanwhile there is a drug that could help him but he can’t have it because Vertex’s desire to make excessive profits means they are holding out for the highest possible price from the NHS.’

Meanwhile, the company used funding from a cystic fibrosis charity and US tax money to develop the drug.

Bill Wiggins, the MP for North Herefordshire, is expected to today call for the Government to scrap Vertex’s monopoly on Orkambi and open access for British patients.

He told the Guardian: ‘Vertex refused the largest ever financial offer the NHS has made in its entire history for this medicine.

More than 10,000 people in the UK have cystic fibrosis, with around half of them thought to be able to benefit from Orkambi.

The families of children with cystic fibrosis – which begins in childhood and kills around half of patients before they reach their mid-30s – have written to Mrs May and Health Secretary Matt Hancock to support Mr Wiggins.

FAMILY OF EIGHT-YEAR-OLD IN A ‘RACE AGAINST TIME’

Eight-year-old Luis Walker, from Horam, East Sussex, has urged US drugs firm Vertex to lower the price of the medicine he needs so it can be made available on the NHS.

Luis last year pleaded with bosses to bring down the cost of Orkambi – hailed as a ‘wonder drug’ – to help treat him ‘feel much better and not have to spend so much time in hospital’.

The youngster appeared on This Morning in August with his mother Christina, 46, who explained that the £100,000-a-year medication was ‘transforming lives’ of people with the incurable lung disease in clinical trials.

Describing her son’s ‘urgent’ case, Christina explained that Luis is constantly in and out of hospital, and is so tired he ‘keeps laying his head back’.

She said the family were in a ‘race against time’ and noted that the drug had enabled CF sufferers to ‘walk up the stairs’ and go on to university. 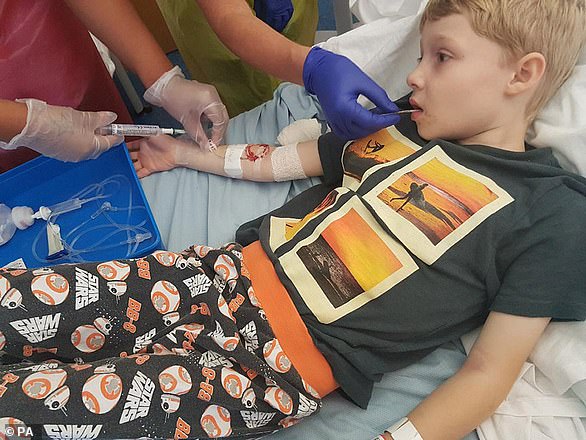 Experts believe using the tablets could stop the illness – expected to kill half of current sufferers before they reach their forties – from becoming severe later in life.

Responding to Vertex’s claim that the NHS ‘undervalued’ their medicine, Christine said: ‘When they say we share your frustrations it makes me cross.

‘How can they when they don’t have a child with cystic fibrosis?’

In his handwritten letter to Vertex, Luis wrote: ‘You have the medicine that can make me feel much better and not have to spend so much time in hospital please sell it to my country.

‘If your son had cystic fibrosis I know you understand and lower the price of Orkambi.’

They said: ‘We cannot explain, let alone expect you to understand, the sheer dread and helplessness it causes us to know that we are likely to outlive our children.

‘The anguish in knowing that a drug exists that can change that – sparing them unnecessary suffering and decline in health – but that they are denied access, is unbearable.’

Parliament’s health and social care select committee is carrying out an inquiry in Orkambi and is expected to hold a public hearing in March.

One NHS boss said Vertex is ‘an extreme outlier in terms of both its pricing and behaviour’ in a letter to the committee.

The firm, based in Boston, Massachusetts, told the Guardian: ‘Out of respect for the parliamentary process, we will not be providing further updates at this time.

‘Vertex welcomes the committee’s interest in access to cystic fibrosis medicines and we look forward to continuing to support its inquiry into this important issue.’

And a spokesperson for the Department of Health and Social Care said: ‘Despite being offered in the region of £500million over five years – the largest ever commitment of its kind in the 70-year history of the NHS – Vertex has refused to accept, putting Orkambi out of reach of patients.

‘We’re aware there may be other avenues open to resolve this issue, but our approach remains urging Vertex to accept NHS England’s generous offer.’

Orkambi is a medication licensed for use by people in the UK with cystic fibrosis, but it is not offered on the NHS except in extreme circumstances.

The drug targets the F508del gene mutation, which affects about 50 per cent of all people with cystic fibrosis.

It is made of a combination of drugs – lumacaftor and ivacaftor – which work together to keep a healthy balance of salt and water in the lungs.

There may be more than 3,000 people with life-limiting cystic fibrosis in the UK who could benefit from the drug.

But the National Institute for Health and Care Excellence (Nice) said in 2016  may not be cost-effective enough, at £104,000 per patient per year, to be offered on the NHS.

More than 117,000 people have signed a petition calling on the Government to make Orkambi available on the NHS, and Parliament discussed the petition in March this year.

Nice is expected to review its stance on the drug in July 2019.

Daniel Bodio, an engineer from Swindon in his mid-30s, was prescribed the drug on compassionate grounds.

He said it improved his lung function from 25 per cent – when he was facing having to have a transplant – to 39 per cent within three weeks.

He told MailOnline last year: ‘The drug should be available to everyone – it brings normality to what is otherwise a difficult existence.’