Chocolate manufacturers have been slammed for the sugar content in some of their Easter eggs.

The NHS recommends children aged four-to-six should consume no more than 19g of the sweet stuff a day.

This means youngsters who munch their way through the entire egg in one day eat as much as 17 days’ worth of sugar in one go.

The National Obesity Forum has now warned that super-sized Easter eggs are a ‘real risk to our health’. 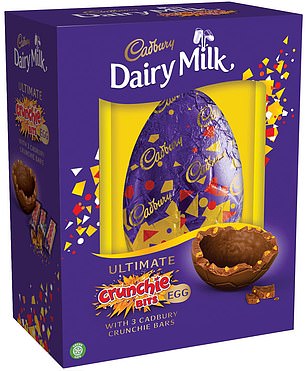 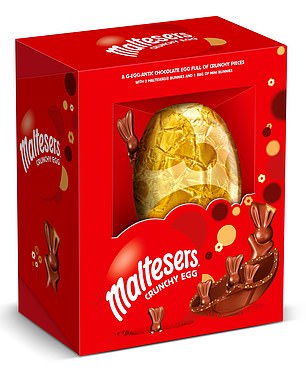 Other offenders include Maltesers Crunchy Easter Egg, which comes with two chocolaty bunnies plus a bag of mini sweet treats. 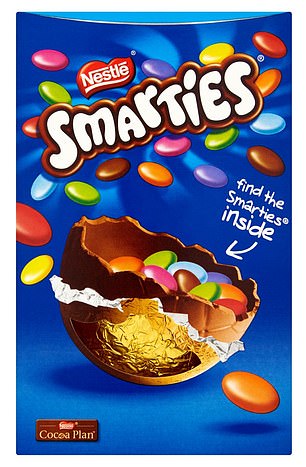 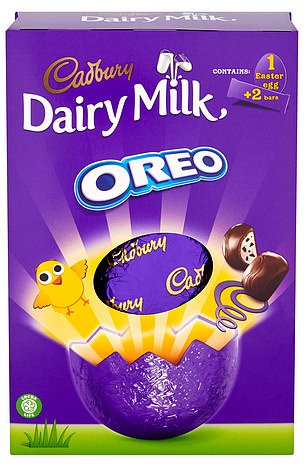 HOW MUCH SUGAR IS TOO MUCH?

The amount of sugar a person should eat in a day depends on how old they are.

Children aged four to six years old should be limited to a maximum of 19 grams per day.

Seven to 10-year-olds should have no more than 24 grams, and children aged 11 and over should have 30g or less.

Popular snacks contain a surprising amount of sugar and even a single can of Coca Cola (35g of sugar) or one Mars bar (33g) contains more than the maximum amount of sugar a child should have over a whole day.

A bowl of Frosties contains 24g of sugar, meaning a 10-year-old who has Frosties for breakfast has probably reached their limit for the day before they even leave the house.

Children who eat too much sugar risk damaging their teeth, putting on fat and becoming overweight, and getting type 2 diabetes which increases the risk of heart disease and cancer.

The Nestlé Smarties Chocolate Egg (480g), which comes with two tubes of the popular treats, has 261g of sugar.

Four-to-six years old who indulge in the treat will therefore be having 13 days’ worth of the sweetener.

And Cadbury’s Dairy Milk with Oreo large Easter egg – although smaller at 278g – contains 195g of sugar, or ten days’ worth.

The National Obesity Forum told The Sun: ‘These eggs are a real risk to health.’

The NHS recommends children aged seven-to-ten have no more than 24g of sugar a day, while adults should limit themselves to a maximum of 30g.

This comes after the Royal Society for Public Health warned the prominent displays of Easter eggs in every shop are an ‘unnecessary temptation’ in a nation beset by obesity.

Cadbury, Nestlé and Mars – which represents Maltesers – have been approached for comment.

The amount of sugar a person should eat in a day depends on how old they are.

Children aged four to six years old should be limited to a maximum of 19 grams per day.

Seven to 10-year-olds should have no more than 24 grams, and children aged 11 and over should have 30g or less.

Mini Easter eggs are a deadly choking hazard, an expert has warned.

Nurse and first-aid trainer Emma Hammett, claimed the chocolatey treats are the same size as a child’s airways.

Babies and young children can choke on anything small enough to fit through a toilet roll, resulting in them struggling to breath and being unable to talk or cry, she said.

Although mini Easter eggs’ manufacturers state they are unsuitable for youngsters under four on their packagings, many parents are oblivious to warning.

Ms Hammett advises parents reduce their children’s choking risk by buying them larger, hollow chocolate eggs, as well as keeping an eye on them while they indulge over the holiday.