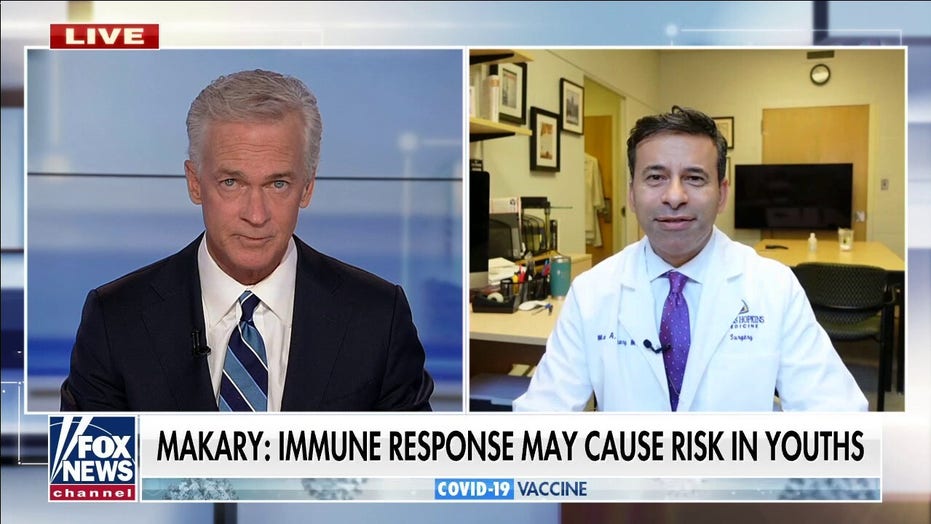 Dr. Marty Makary of Johns Hopkins School of Public Health on why some are experiencing complications after getting vaccine.

An analysis of brain scans from people once infected with COVID-19 suggested a consistent pattern in loss of grey matter over time, researchers say.

Researchers affiliated with the University of Oxford posted findings ahead of peer review this week to medRxiv, drawing on data from the U.K. Biobank. They compared brain scans taken pre-pandemic to scans taken about three years later among 394 coronavirus patients and 388 matched controls. A further analysis included 15 hospitalized patients compared with 379 people who hadn’t been hospitalized.

“Our findings thus consistently relate to loss of grey matter in limbic cortical areas directly linked to the primary olfactory and gustatory system,” or areas in the brain related to the perception of smell and taste, authors wrote.

The initial set of scans taken before the pandemic strengthens the findings, study authors say, because they help differentiate the effects of COVID-19 disease from patients’ preexisting health conditions.

Researchers said the three areas revealing a “significant loss” in thickness and volume of grey matter among COVID-19 patients was the “parahippocampal gyrus, the lateral orbitofrontal cortex, and the superior insula,” later adding that the “strongest deleterious effects of COVID-19 could be seen predominantly in the left hemisphere.”

Results from the comparison of hospitalized patients “were not significant,” but authors noted “comparatively similar” findings to the larger group of coronavirus patients, “with, in addition, a greater loss of grey matter in the cingulate cortex, central nucleus of the amygdala and hippocampal cornu ammonis.”

What’s more, the researchers noted “a high number of mild cases,” writing, “there is a fundamental need for more information on the cerebral effects of the disease even in its mildest from.”

The team stopped short of pinning a causal relationship due to the study design, yet still expressed confidence in the results. The study has its limitations, like lack of a breakdown by patients by factors like oxygen saturation, due to unavailable data, while other limitations involved a “small number of participants from Asian, Black or other ethnic backgrounds other than White,” and further issues involved deriving COVID-19 status among all controls from test kits with varied accuracy.

“By using automated, objective and quantitative methods, we were able to uncover a consistent spatial pattern of loss of grey matter in limbic brain regions forming an olfactory and gustatory network. Whether these abnormal changes are the hallmark of the spread of the disease (or the virus itself) in the brain, which may prefigure a future vulnerability of the limbic system, including memory, for these patients, remains to be investigated,” the study reads.