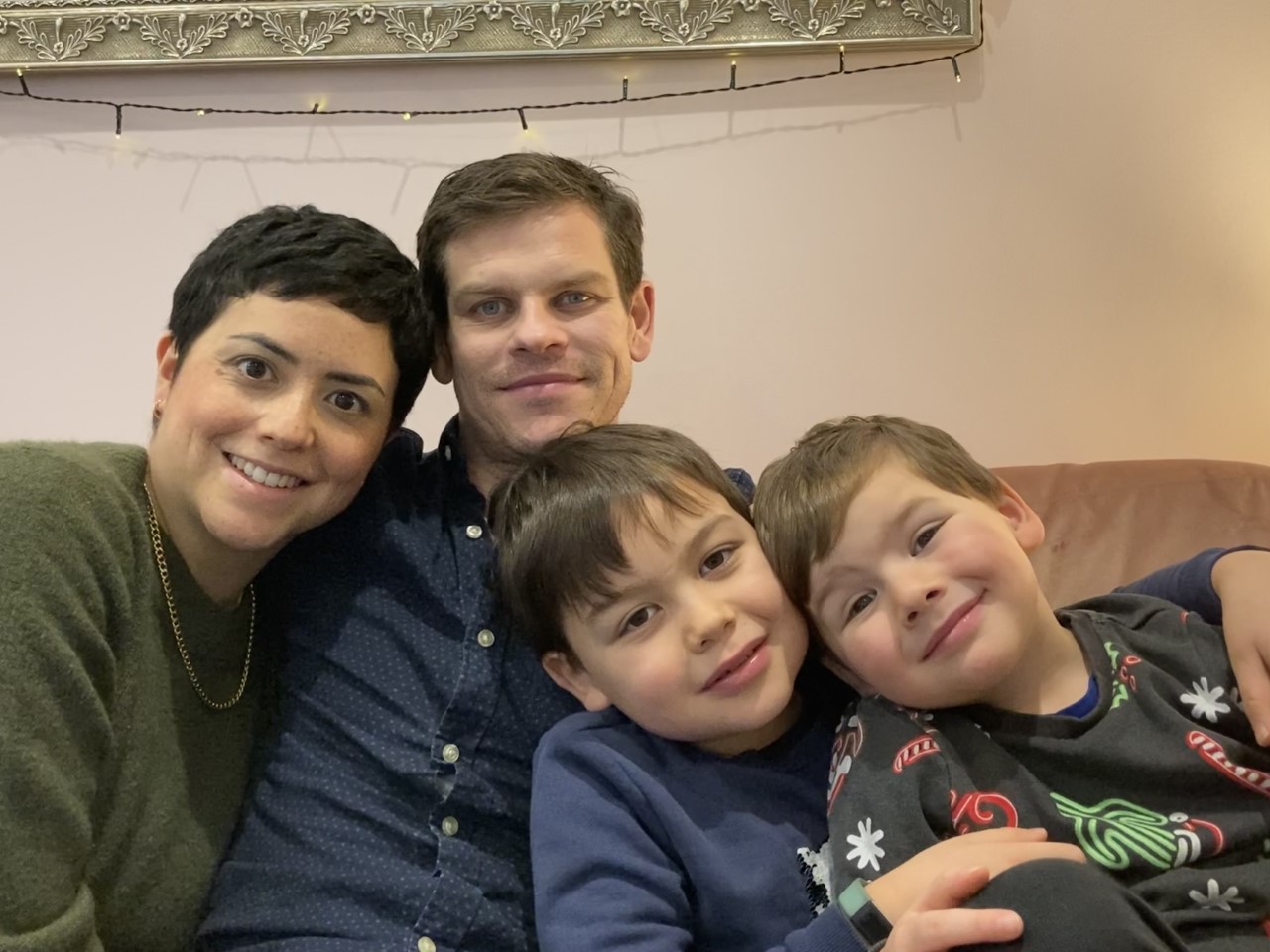 The year 2020 was not a good one for anyone but, for my family, it felt like the world was conspiring against us.

One day in late September, Matt, my husband, said his stomach was playing up. At first, he thought it was bad indigestion but as the day went on it got worse.

When I came down from putting the kids to bed that night, I found him on the phone to 111. After an agonising 24 hours in A&E, he was sent home with painkillers.

He has private insurance with work, so we agreed that he should go and see a specialist, just for peace of mind. At no point did we consider it could be cancer.

Around a week later, he was diagnosed with neuroendocrine cancer of the small bowel and – although it was not mentioned in connection with it at that point – the ultrasound scan also found spots on his liver.

This meant he was stage 4. Stage 4 means that the cancer has spread, or metastasized, from its original area to other parts of the body. This is what the spots on his liver were.

Hearing that news, I knew the outlook for stage 4 was not good.

However, neuroendocrine cancer is generally slow growing and there are many options, which mean that people can live with it for a long time.

The next few months were a blur of scans, treatment plans and bowel surgery. I think I was in ‘fight or flight’ mode the whole time. He didn’t need chemo, but he had to have monthly injections and take pancreatic enzyme replacement tablets when he ate.

Matt dealt with it all really well; he just got his head down and got on with it. He had to change his diet to reduce the chance of another obstruction, so it was a lot of soups, yoghurts and low-fibre food.

He lost a lot of weight but at the same time, continued exercising in order to be as ready for surgery as he could be.

He had surgery at the beginning of December 2020, and it all went well but the recovery was hard, particularly the first few weeks. However, by the middle of December he was back home and able to walk around and it felt like maybe there would be a bit of stability coming.

How wrong we were.

Just a few weeks later, while having a shower, I felt a very large and obvious lump in my right breast. How could I not have felt that before?

I felt oddly calm as I went to show Matt. Weirdly, we both recall knowing in our guts that it was cancer. We knew it was possible. Life had flipped upside down already, so it could certainly do so again.

I went to the GP and was referred to the breast clinic. When they did the ultrasound, I felt the atmosphere in the room change.

The consultant came in to do a biopsy and I explained through tears that I couldn’t have cancer because my husband had cancer too and we had two little kids who needed us.

When I eventually took a deep breath and asked outright if it was cancer, I think they all knew but, because of my situation, the consultant said it was hard to tell. She tried to reassure me but her body language did the opposite. She couldn’t look me directly in the eye.

I can’t remember much of the following days. I just went through the motions. A week later I was back at the hospital, receiving confirmation of my worst fears.

I was diagnosed with breast cancer.

Matt and I were both in shock. I didn’t cry, I just wanted to know what I had to do to get rid of it. I think both of us felt a kind of inevitability about it.

It was the hardest four months of my life, I cried a lot, lost all my hair and a lot of myself, but I did it, and I feel very proud of myself for getting through it.

I couldn’t have got through my chemo without Matt, my mum and his parents. From keeping the kids happy to making me food and organising my meds, they all played their part.

A month later, I had surgery to remove the reduced lump and a biopsy to see if it had been successful.

Unfortunately, they found active cancer in the tissue.

So back to theatre I went, this time to remove all my lymph nodes. This time, success!

I then started four weeks of radiotherapy and targeted chemotherapy, which will finish next month.

Alongside this, I also started hormone treatment, which consists of an injection that turns my ovaries off and a daily pill to stop any other cells in my body producing oestrogen. This has put me in a medically induced menopause, which at 37 isn’t ideal. It has been a lot.

Despite it all though, there were many light and happy moments in between, mainly supplied by my two amazing boys, who were six and three when I was diagnosed, who pick me up every day with their smiles and cuddles.

We have tried to be as open and honest with them about what has been happening, while keeping it age appropriate.

We told them that Matt needed a lump in his tummy removed but, because his cancer hasn’t had too much of a physical impact on his life since then, we have refrained from speaking about it in those terms.

This is something we will broach as and when we feel the time is right.

As for me, we told my eldest that I had a ‘naughty lump’ in my boob, which I needed to take medicine for. I explained that this would make me feel yucky and that my hair would fall out, but that it would make me better.

Over time, as I’ve continued to need treatment, I introduced the idea that the lump was cancer. I feel like my eldest has taken it in his stride but I know they will both have questions in the future.

My youngest found it hard not having me as available to him as before, but he accepted Matt for nighttime cuddles and that sometimes I was too poorly to play.

Cancer has changed us forever, but I truly believe we are getting more out of life now. It’s not like life is radically different in a practical sense, it’s just that I don’t sweat the small stuff. It’s very liberating!

It’s also given me the opportunity to meet some inspiring women going through similar things and to have some awesome new experiences, the most amazing of which is still to come.

In November this year, I’ll be trekking 100km across the Sahara Desert for CoppaFeel, to raise as much money for this amazing charity who are on a mission to educate and remind people to get to know their boobs in order to catch breast cancer early.

After the time we’ve had as a family, I know, more than anyone, just how important that is.

To donate, visit justgiving.com/fundraising/lucyscoppatrek or to hear more, visit my Instagram page @my_bothersome_boob.