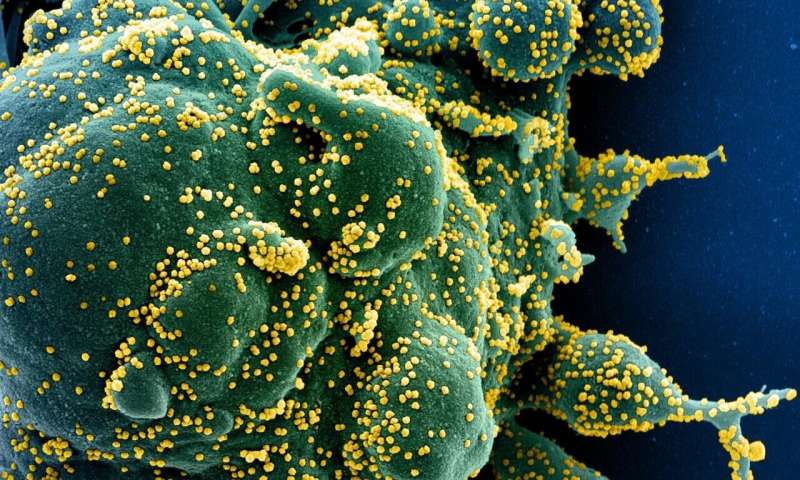 What is the endgame for SARS-CoV-2, the virus that is causing worldwide devastation? If it becomes endemic—circulating in the general population—and most people are exposed in childhood, SARS-CoV-2 may join the ranks of mild cold-causing coronaviruses that currently circulate in humans, according to a model developed by Emory and Penn State scientists.

The model, published January 12 in Science, draws upon studies of the four common cold coronaviruses and SARS-CoV-1. For those viruses, the term ‘herd immunity’ is incomplete and possibly misleading, says postdoctoral fellow Jennie Lavine, Ph.D., first author of the Science paper.

The four common cold-causing coronaviruses have been circulating in humans for a long time and almost everyone is infected at a young age—younger than measles before a vaccine was available. Natural infection in childhood provides immunity that protects people later in life against severe disease, but it doesn’t prevent periodic reinfection, says Lavine.

Studies are now emerging that provide concrete data on how long antibodies and immune cells against SARS-CoV-2 last after infection, Lavine says. However, researchers are still figuring out how those components translate to protection against disease or transmission.

“Overall, we’re asking: how does SARS-CoV-2 compare to other viruses such as seasonal influenza or respiratory syncytial virus,” she says. “This model assumes immunity to SARS-CoV-2 works similar to other human coronaviruses. We don’t really know what it would be like if someone got one of the other coronaviruses for the first time as an adult, rather than as a child.” 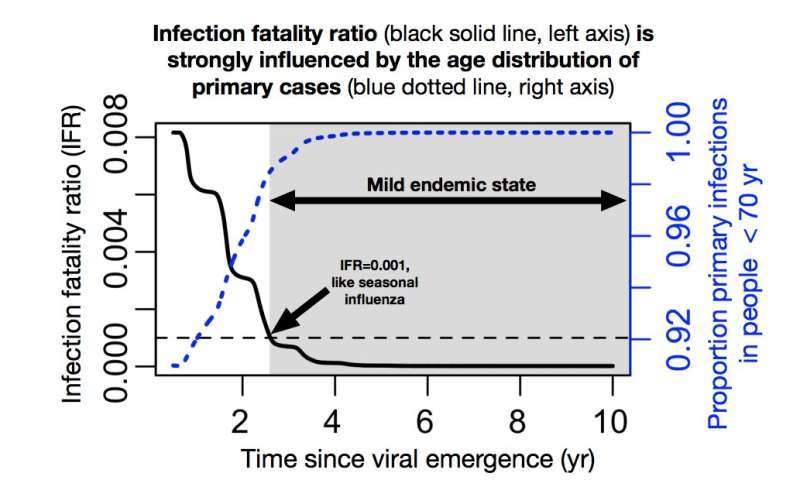 The model predicts that the infection fatality ratio for SARS-CoV-2 may fall below that of seasonal influenza (0.1 percent), once an endemic steady-state is reached.

“We are in uncharted territory, but a key take-home message from the study is that immunological indicators suggest that fatality rates and the critical need for broad-scale vaccination may wane in the near term, so maximum effort should be on weathering this virgin pandemic enroute to endemicity,” said Ottar Bjornstad, Distinguished Professor of Entomology and Biology and J. Lloyd & Dorothy Foehr Huck Chair of Epidemiology, Penn State.

A safe and effective vaccine against COVID-19 could save hundreds of thousands of lives in the first year or two of vaccine roll-out, but continued mass vaccination may be less critical once SARS-CoV-2 becomes endemic, the authors say. Targeted vaccination in vulnerable subpopulations may still save lives, they say.

Another implication is: during the transition to endemicity, that using symptoms only as a surveillance tool to look for infections and curb the virus’ spread will become more difficult. Thus, widely available testing may become particularly important during vaccine roll-out to protect vulnerable populations, the authors point out. 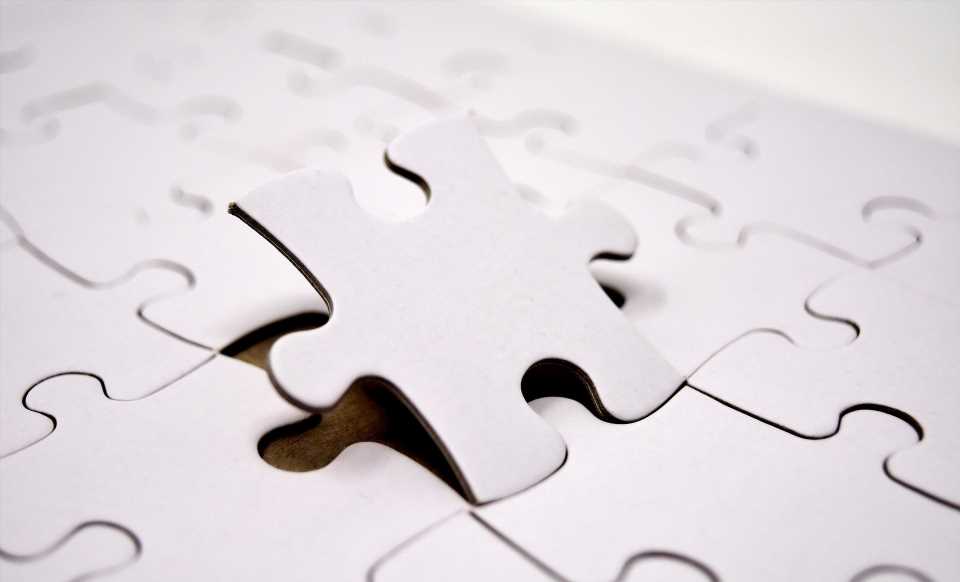 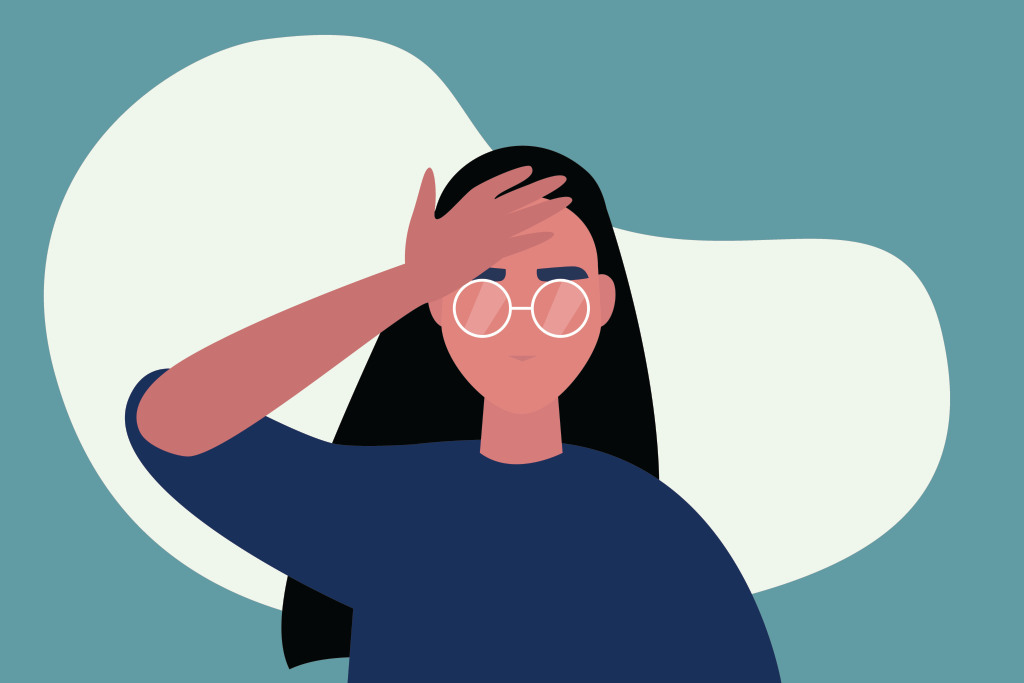 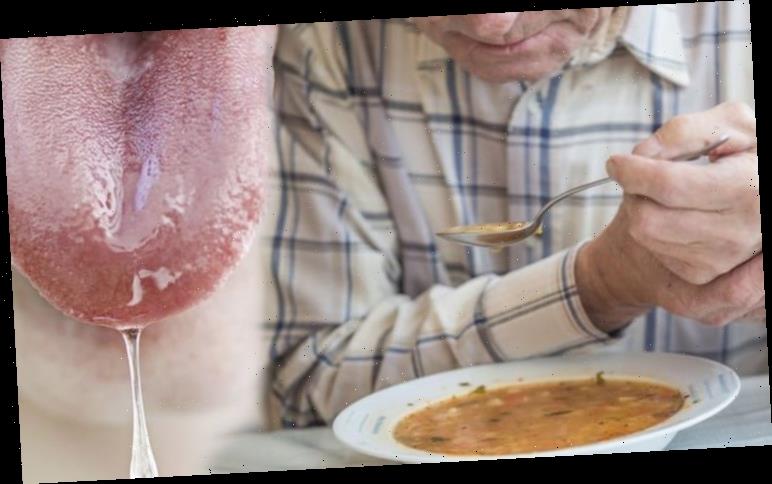