Luca Johnson may have already had five close shaves with death but his parents say he is the ‘happiest boy you’ll ever meet’.

The toddler, who was born 12 weeks premature, has been left with extensive brain damage after surviving sepsis and four bouts of meningitis.

Doctors have warned the now 18-month-old may never walk, talk or even sit up on his own because of the lasting damage.

But Luca’s mother, Jodie, 30, says she has every faith her ‘amazing’ son – who has a twin sister called Lola  – will defy the odds once again because ‘anything is possible’. 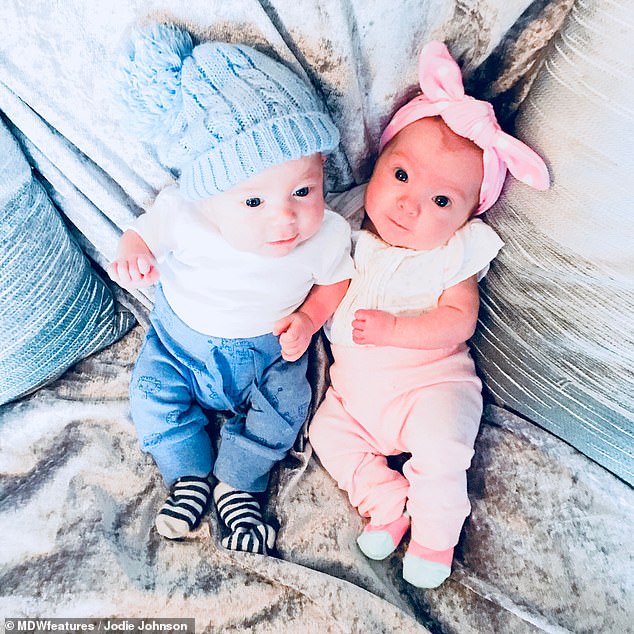 The toddler, who was born 12 weeks premature, has been left with extensive brain damage after surviving sepsis and four bouts of meningitis (pictured with twin sister Lola)

Speaking about her son’s uncertain future, the full-time carer said: ‘We just don’t know what or how his future will play out.

‘I still get emotional now, but it’s Luca who keeps us all going with his big smile. He’s the happiest boy you will ever meet.

‘He has physio every week to build his strength, so he may never sit up, walk or talk.

‘But with plenty of physio and dedication I believe anything is possible. I have every faith in him.

Mrs Johnson, from Leigh, Greater Manchester, added: ‘He has a very long road ahead of him, but I think 2019 is Luca’s year.

‘I want to show the world what an amazing little boy he is and what an inspiration he will be to others.

‘Even though he has brain damage, it doesn’t stop him and it’s not the end of the world.’

Mrs Johnson and her husband Matthew, 28, found out they were expecting twins in May 2017 – a year after she gave birth to their son Nova. 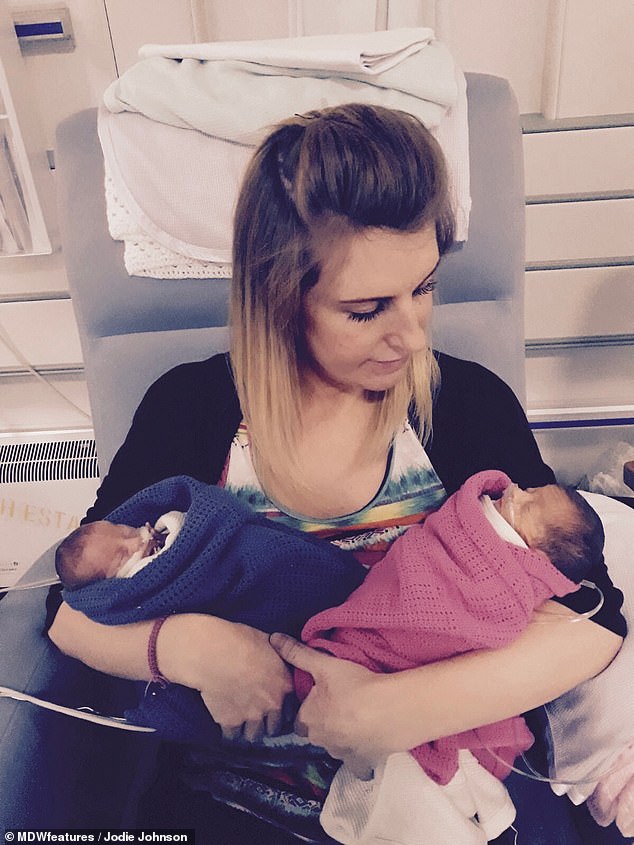 Luca’s mother, Jodie, 30, says she has every faith her ‘amazing’ son – who has a twin sister called Lola – will defy the odds once again because ‘anything is possible’

They hoped the pregnancy would go as smoothly as their first – but things took a turn for the worse when her labour started at just 26 weeks.

Mrs Johnson was then whisked away to Bolton Hospital in an ambulance but the twins’ heart rate were beginning to slow down.

Doctors knew an emergency caesarean was required, and they were delivered by ‘amazing’ medical staff on September 24, weighing just 2lbs each.

Lola exceeded all expectations during her stint in intensive care. Though, Luca was not as fortunate, spending three months needing round-the-clock care.

Luca contracted sepsis – a violent, and often fatal, immune response to an infection – when he was just six weeks old. He was given morphine to control the pain.

After overcoming the odds to beat sepsis, he then contracted bacterial meningitis a month later, aged just 11 weeks. 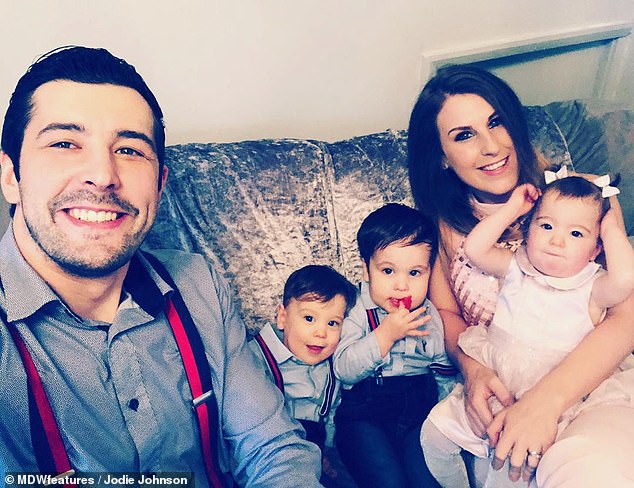 Mrs Johnson added: ‘He has a very long road ahead of him, but I think 2019 is Luca’s year’ (pictured with her husband Matthew, Luca, Lola and their other son Nova)

He went on to endure meningitis three more times – in March, May and June 2018 – before he was nine months old, leaving him with permanent brain damage.

Luca has since been diagnosed with periventricular leukomalacia (PVL) – a type of brain injury common in premature babies.

And he is also known to have a form of cerebral palsy, another form of brain injury that severely affects his development.

Mrs Johnson spent months questioning why someone was so badly trying to take her son away from her, after nearly losing him on countless occasions.

She said: ‘Luca has had to fight since the day he was born because he had life threatening infections and he was ventilated for two weeks.

‘At just six weeks old he got sepsis. He should have still been in my belly at that time, but we were very close to losing him. 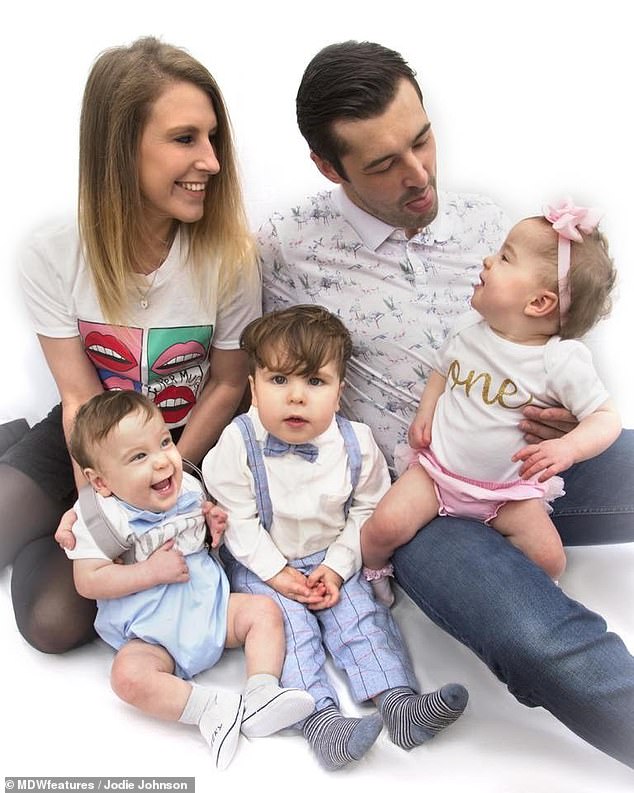 Mrs Johnson said they first noticed something was wrong with Luca during his third bout of meningitis (pictured with her husband Matthew, Luca, Lola and their other son Nova)

‘Then at 11 weeks old he caught bacterial meningitis before being on antibiotics for three weeks.

‘We thought we were over the worst but little did we know that in March 2018 he would be back in hospital for his second bout of bacterial meningitis.

‘Only a few weeks later, in May things took another turn for the worst and we found ourselves back in hospital to hear the news that he had meningitis again.’

Mrs Johnson said they first noticed something was wrong with Luca during his third bout of meningitis.

She added: ‘By June of that year my boy got ill again. I thought that it couldn’t surely have been the same cause again.

‘We took him to the hospital to be seen to once again only to be told the bad news yet again that he had meningitis for a fourth time, and he was only nine months old.’

Mrs Johnson added: ‘It was the scariest thing I have ever gone through and it wasn’t just once we went through it.

‘It felt like a nightmare that never ended, but all I could do was hope that some sort of miracle would happen.’

An MRI and CT scan then showed he had extensive brain damage.

Mrs Johnson said: ‘We needed a bit of time to process things because nothing will ever prepare you for being told your boy has brain damage.’

Meningitis is inflammation of the membranes that surround and protect the brain and spinal cord.

Anyone can be affected but at-risk people include those aged under five, 15-to-24 and over 45.

People exposed to passive smoking or with suppressed immune systems, such as patients undergoing chemotherapy, are also more at risk.

The most common forms of meningitis are bacterial and viral.

Symptoms for both include:

Headache is one of the main symptoms

Some 10 per cent of bacterial cases are fatal.

Of those who survive, one in three suffer complications, including brain damage and hearing loss.

Limb amputation is a potential side effect if septicaemia (blood poisoning) occurs.

Vaccines are available against certain strains of bacteria that cause meningitis, such as tuberculosis.

Viral is rarely life-threatening but can cause long-lasting effects, such as headaches, fatigue and memory problems.

Thousands of people suffer from viral meningitis every year in the UK.

Although ineffective, antibiotics may be given when patients arrive at hospital just in case they are suffering from the bacterial form of the disease.