Almost a third of doctors and nurses do not feel confident enough on sun safety to advise their patients on how to avoid harmful UV rays, research suggests.

A study of more than 1,500 medics in the US found just under 30 per cent do not believe they have the knowledge to keep the public sun safe.

As a result, less than half of those surveyed regularly advise their patients to wear sunscreen, sit in the shade and avoid tanning beds.

Scientists from the Centers for Disease Control and Prevention warn most skin cancer cases come about due to UV rays from the sun or ‘indoor tanning’. 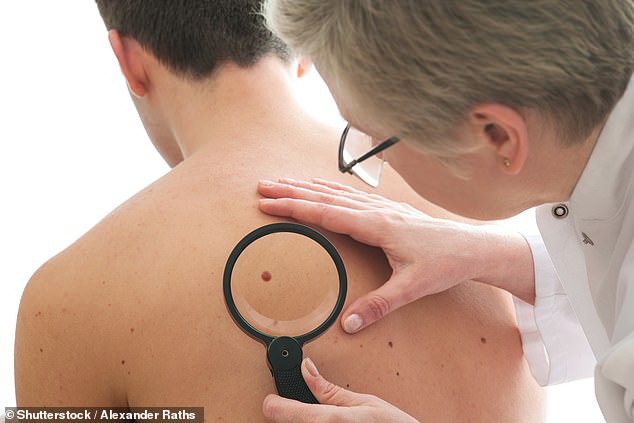 Almost a third of medics do not feel confident enough on sun safety to advise their patients on how to avoid harmful UV rays. This could be putting patients at risk of skin cancer (stock)

Nearly five million adults are treated for skin cancer every year in the US, the researchers wrote in the journal Preventative Medicine.

And in the UK, there were 15,970 diagnoses of melanoma, the deadliest form of the disease, between 2014 and 2016, Cancer Research UK statistics show.

There has been a recent push in the US for doctors to promote skin cancer prevention and ‘sun safe behaviours’, the researchers wrote.

The latter includes using sunscreen, wearing protective clothing, sitting in the shade and staying indoors at midday, which is when UV rays are typically at their most intense.

In 2012, the US Prevention Services Task Force (USPSTF) released its first set of recommendations on ‘clinical counseling on skin cancer prevention’.

It can happen abroad or in the UK.

The researchers, led by the behavioural scientist Dawn Holman, set out to uncover how many doctors in the US advise their patients on sun safety.

They analysed data from the online 2016 survey DocStyles.

Results revealed just under 30 per cent of those surveyed do not feel ‘confident in their ability to provide advice about sun protection’.

As a result, less than half (48.5 per cent) of the medics regularly advise their patients on sun safety.

And only just more than a quarter (27.4 per cent) recommend people avoid ‘indoor tanning’.

Of those who do give out advice, most only counsel patients with fair skin.

While people with pale complexions, light hair and freckles are more at risk of skin cancer, people with darker skin tones can also burn and develop the disease, the researchers warned.

However, the medics were less likely to advise patients to seek shade and check the UV index. This identifies the strength of the sun’s radiation at a given place on a particular day.

The researchers stress providing a ‘range of sun safety options’ allows patients to ‘find an approach that fits their preferences and activities’.

The study also found the medics were more likely to give advice if they had been practicing for more than 16 years, had treated sunburn in the past 12 months or were familiar with the USPSTF guidelines.

To overcome the time issue, future studies should look for ways of ‘engaging other members of the medical team’, such as ‘health educators’, in ‘counseling efforts’, the researchers added.