AI could detect heart disease faster, earlier and cheaper than any other test, studies find

Researchers from the Mayo Clinic and Stanford University say two separate studies have shown AI was not only able to identify irregular heart rhythms but also the early stages of heart failure.

In some cases, the AI model did so up to 15 percent more accurately than EKG results analyzed by board-certified cardiologists.

Both teams say the technology will increase both the speed and accuracy of diagnosis so physicians can focus on making sure their patients receive the proper care. 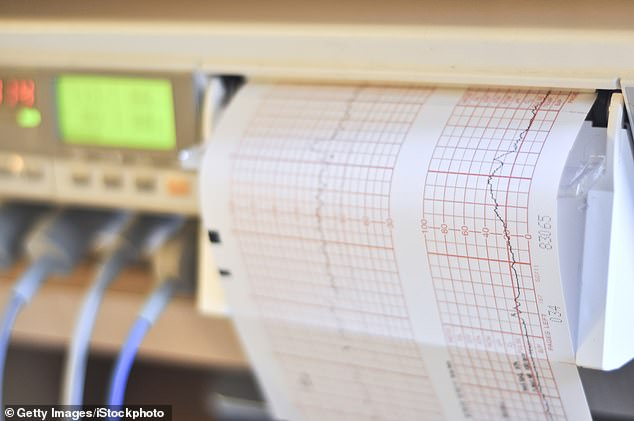 For the first study, the team from the Mayo Clinic looked at left ventricular dysfunction, an early sign of congestive heart failure.

Normally, the heart moves oxygen-rich blood from the lungs to the left atrium.

The heart’s pumping action moves oxygen-rich blood as it travels from the lungs to the left atrium (upper chamber).

The blood passes to the left ventricle (lower chamber) and then passes on to the rest of the body.

But in left-ventricular failure, the heart struggles to properly pump blood throughout the body.

Symptoms include shortness of breath, swelling of the legs, and fatigue, but between three and six percent of the general population doesn’t experience any symptoms at all.

The team created and trained an AI model to identify ventricular dysfunction using data from past EKGs and transthoracic echocardiograms.

The AI run in conjunction with an EKG was found to have a sensitivity rate of 95.6 percent and a specificity rate of 92.4 percent.

This was higher than cardiologists’ rates of 86 percent and 85 percent, respectively.

‘Congestive heart failure afflicts more than five million people and consumes more than $30 billion in health care expenditures in the US alone,’ said senior author Dr Paul Friedman, chair of the department of cardiovascular medicine at the Mayo Clinic.

‘The ability to acquire an ubiquitous, easily accessible, inexpensive recording in 10 seconds – the EKG – and to digitally process it with AI to extract new information about previously hidden heart disease holds great promise for saving lives and improving health.’

For the second study, Stanford University looked at cardiac arrhythmias, which is when the heart beats too quickly, too slowly or irregularly.

Researchers collected more than 91,000 records from a million people who wear Zio, a wireless cardiac monitor from tech company iRhythm.

Next, they trained an AI algorithm to detect and identify 10 arrhythmias.

The AI was also trained to distinguish those 10 from sinus rhythm – which is a normal heartbeat – and from noise, which can increase the incidence of arrhythmia.

The team compared the results from the AI to results annotated by a team of board-certified practicing cardiologists.

They found the algorithm had above a 90 percent specificity and sensitivity rate of arrhythmias while the cardiologists had rates between 75 and 78 percent.

The teams says this study is the first time an artificial intelligence model has been able to detect as many arrhythmias and on such a large scale of participants.

‘This really shows what an industry and academic collaboration can do,’ Mark Day, Executive Vice President of Research & Development at iRhythm, told DailyMail.com.

‘This technology is not meant to replace role of physicians but rather to focus their time and effort on the patients’s care plan to hopefully better outcomes, and potentially reduce some workflow problems.’

Day said there is a possibility in the future that this could be used by tech companies such as Apple.

‘It’s possible but the key is you need a continuous amount of data on these platforms to run a software like this so any competitive services would have to do something similar for it to work,’ he said.