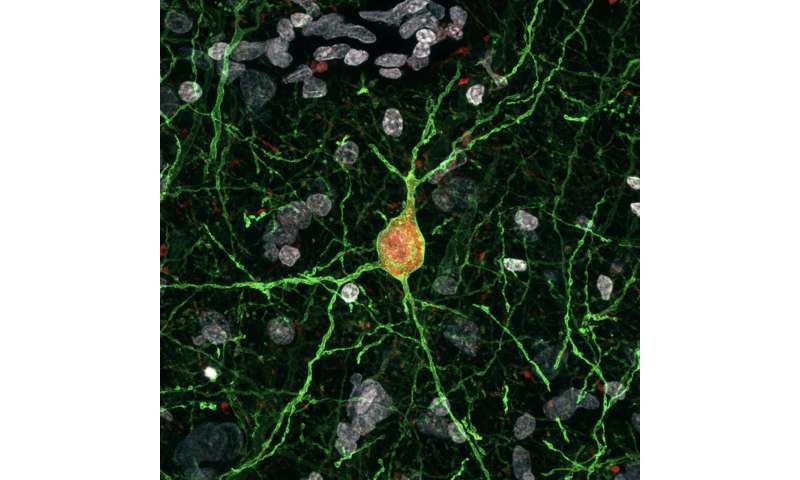 Large-scale studies examining RNA transcripts produced by genomes under specific circumstances or in specific cell populations, also known as transcriptomic studies, have recently led to fascinating new observations. These observations could help to understand where and when genes associated with specific neuropsychiatric disorders are expressed within different types of cells.

To devise effective treatments for neuropsychiatric disorders, medical specialists first need to be able to gain a better picture of the neural and genetic mechanisms associated with them. This can be achieved by targeting and manipulating specific neuronal subtypes in the brains of humans, non-human primates and other mammals in order to study the animals’ behavior and identify cells that may play a role in specific neuropsychiatric disorders.

Researchers at the Stanley Center for Psychiatric Research (Broad Institute) and other institutes in the United States have recently devised a new viral tool for manipulating interneurons in mice, non-human primates and humans. Their method, outlined in a paper published in Nature Neuroscience, entails the use of viral vectors that were developed by identifying short sequences of DNA restricting the expression of a virus onto the desired target cell type.

“We focused our efforts on a particular type of cell: fast-spiking interneurons,” Jordane Dimidschstein, head of the team who led the study, told Medical Xpress. “These neurons exert a strong level of inhibitory control over local networks, and their dysfunction has been directly implicated in neurological and neuropsychiatric disorders, including Dravet syndrome, focal epilepsy, ASD and schizophrenia. As such, gaining control over their activity is of particular interest for both fundamental research and clinical applications.”

The main objective of the study carried out by Dimidschstein and his colleagues was to develop a viral tool that could be used to study the neural underpinnings of different neuropsychiatric disorders in a broad range of settings. To do this, the researchers used a class of viral vectors known as adeno-associated viruses, which can be used both to conduct research and to implement gene-therapy on humans.

“Engineering recombinant adeno-associated viruses (rAAVs) to target specific subtypes of cells in mice would undoubtedly make the life of researchers easier (i.e., anyone will favor a simple virus injection over the generation of complex transgenic lines), but the real impact will come from the adoption of these tools in species where genetic access is limited,” Dimidschstein said. “We thus focused our efforts on identifying regulatory sequences with a high degree of conservation across mammalian genomes.”

The strategy employed by Dimidschstein and his colleagues appeared to be very useful. In fact, the viral vectors they identified were found to retain their specificity across a variety of species, including rats, marmosets, macaques and humans.

To demonstrate the vectors’ specificity to humans, the researchers performed experiments directly on human brain tissue. They used thin tissue samples collected from patients who were undergoing resection surgery, which were then kept in culture conditions and exposed to the virus. This allowed them to explore the applicability of their viral vectors to humans with a fairly high degree of confidence, gathering evidence that the vectors could actually be of therapeutic use.

“Our enhancers provide the means to target and selectively manipulate three functionally distinct neuronal populations,” Dimidschstein said. “Because the approach doesn’t rely on the use of complex genetic strategies, these tools can be used across species and could be used by the neuroscience community to investigate the role of these cell types in normal and pathological contexts beyond mice. For example, the comparison of their involvement in cortical function between mice and non-human primates (which was not possible until now) might lead to insightful discoveries.”

The enhancers they identified were found to be at least in part responsible for controlling the expression of Scn1a in fast-spiking interneuron populations. While findings suggest that the abnormal functioning of fast-spiking interneurons plays a key role in Dravet Syndrome (a severe form of epilepsy), other neuronal populations expressing the Scn1a gene could also influence its course.

Precisely mapping the activity of regulatory elements within different brain regions using the strategy devised by this team of researchers could lead to new discoveries about the role that other populations of neurons play in Dravet syndrome, as well as other neuropsychiatric disorders. This could ultimately aid the development of more effective and comprehensive treatments for these disorders.

“So far, genetic studies have focused almost solely on alteration of the coding sequence of genes. Whole genome sequencing has now reached a point where systematically querying the regulatory role of non-coding regions is possible, opening up the possibility of systematically mapping disease-causing non-coding mutations that result in neurological diseases,” Dimidschstein said. “Our approach complements this by providing a systematic means to determine the regulatory function of the non-coding regions of specific genes.”

The recent paper authored by Dimidschstein and his colleagues introduces a promising method that could soon be used to investigate the neural and genetic underpinnings of different neuropsychiatric disorders more in depth, which is based on the use of adeno-associated virus vectors. The researchers are now trying to identify, develop and validate alternative viral tools that could be used to manipulate other populations of neurons in the human brain.

Related posts:
Tags: a, and, for, in, interneurons, Mammals, manipulation, mice, New, of, other, strategy, the, Viral
Personal Health
Health News