‘I’ll make sure I live this life for both of us now’: Read a big sister’s heartbreaking account of the loss siblings feel when cancer strikes

Eleven-year-old Eve Lyons loved drawing and was a talented young artist. On the walls of her bedroom in Corby, Northants, were dozens of hand-drawn sketches of her favourite things — rainbows, unicorns and butterflies.

One particular night, in June 2017, Eve drew a smiley-faced sunshine with the words ‘Keep Smiling’ underneath. As her mother, Suzanne, tucked her up in bed, Eve handed over the picture and said: ‘Mummy, no matter what happens, always remember to keep smiling.’

It was a moment that changed everything. ‘We realised then that Eve knew she wasn’t going to make it,’ says her older sister, Meg, 28.

‘Until that point, for over two years, she had been so positive, always believing that she was going to live.

‘But a couple of weeks before the end, she must have realised her body was giving up, and we knew, too. I remember looking at her lying on the couch, so weak, with no weight on her and with lumps the size of tangerines on her body and thinking: ‘If you want to go now, baby, go’.’ 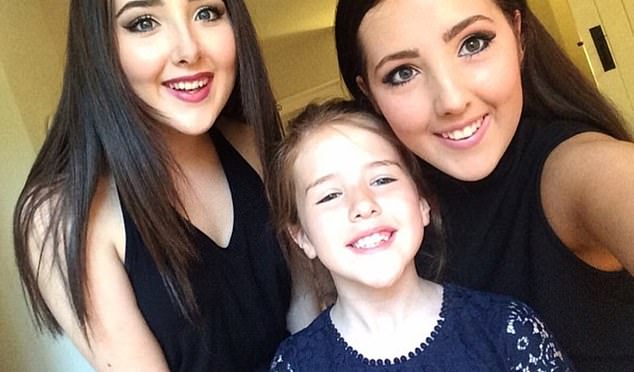 Grieving: Beth and Meg (right) with Eve. Five years on, Meg is sharing Eve’s story to support the Mail’s campaign in partnership with Cancer Research UK for more investment in children and young people’s cancer

Heartbreakingly, Eve did go. A week after drawing that smiley sunshine, this ‘amazing soul’ died in that bedroom, held in the arms of her devoted family. For parents Suzanne and Tom and older sisters Meg and Beth, the loss has left a huge, gaping hole in their lives.

Today, five years on, Meg is sharing Eve’s story to support the Mail’s campaign in partnership with Cancer Research UK for more investment in children and young people’s cancer.

Meg, an actress, says that Eve’s arrival into the family was a ‘magical’ time and that she and Beth, 26, a singer, doted on their little sister.

‘I was 12 when Eve was born, so it was wonderful to watch her grow up and appreciate moments like her first steps and first words in ways that I didn’t with Beth, who is only two years younger than me,’ she says.

‘Eve was the most amazing soul — kind, funny, she made us laugh every day. She was everyone’s friend and was always acting or dancing. She was brilliant at school — although, occasionally, she’d get told off for talking too much — but she was confident and so mature in her outlook. We used to joke that she was like a little old lady in a child’s body. We loved her so much.’

The campaign is for more investment in research into childhood cancers

But on sports day in 2015, the family’s world came crashing down. Eve, a seemingly healthy and fit nine-year-old at the time, took a tumble and hurt her hip. ‘Mum and dad took her to A&E as she was in a lot of pain, and it was there, when they scanned her, that they found a tumour on her hip,’ says Meg. ‘I was away studying and my parents had let me know that she’d been taken to hospital.

‘But when Dad rang me later to say: ‘I’m really sorry, I have something to tell you’, I blurted out: ‘She’s got cancer hasn’t she?’ Somehow, I just knew.

‘It felt like my heart had broken into a million pieces. All I could think was: ‘I’m not going to see my little sister grow up.’ ‘

Eve was diagnosed with Ewing sarcoma, a rare cancer of the bone or soft tissue that occurs most often in teenagers and young adults. The survival rate is around 60 per cent.

After the shattering phone call, Meg’s father fetched her from drama school in Guildford. The next morning, the whole family visited Eve in hospital.

‘We hadn’t told her what was going on yet because we didn’t want her to be frightened and we weren’t sure how to do it, so in the end, a doctor knelt by her bedside and said: ‘Eve, you have some horrible bugs inside you, and it’s called cancer,’ ‘ says Meg.

‘Her response was something that will stay with me for ever. She gave a bit of a sigh and said: ‘Who? Cancer? Me? OK, let’s do this.’

‘She didn’t cry, she was so mature and matter-of-fact, and even the doctor said he had never seen anything like it from a child.’ Moments later, Eve was guided around the wards and introduced to the medical staff who would become so familiar to her.

All money raised will support the charity’s work on cancers affecting children, so that more under-25s can survive with a good quality of life

‘I remember her making jokes and being silly even then, probably trying to make us feel better and make us think that everything was going to be ok,’ says Meg.

‘In the months to come, I’d see her do that when other children first came to the oncology ward, all scared and nervous. She’d smile and open her arms to them.’

More children and young people than ever are surviving their cancer thanks to research, says Dr Laura Danielson, children’s and young people’s research lead at Cancer Research UK.

‘However, for some types of cancer, such as Ewing sarcoma, survival remains low, particularly if the disease has already spread.

‘Current treatments include a combination of chemotherapy, radiotherapy and/or surgery, but these aren’t always effective. Better and less toxic treatments are urgently needed to make a difference for these young patients.’

The charity is funding a trial for a more targeted drug in combination with chemotherapy in newly-diagnosed patients whose cancer has already spread.

Meg says Eve must have known how ill she was. But showing a maturity that belied her young years, she often tried to shield her loved ones. ‘She would call her tumour ‘Monty’, because she didn’t want to upset us, particularly Mum and Dad,’ says Meg.

‘But there were times when she said that the treatment was like acid or hot lava going through her body, and it was so painful that sometimes she couldn’t get up to go the bathroom.’

Despite the brutality of the cancer and the treatment Eve was undergoing, the three sisters were able to share special memories.

Meg recalls: ‘On one occasion, when she’d been finding it difficult to eat due to her chemo making her feel sick, we took her out for dinner and she ate the whole plate. We couldn’t stop laughing.

‘Another special memory was taking her backstage at the musical Kinky Boots. She had been so ill beforehand we thought we might have to cancel, but she managed to power through and they even brought her up on stage where she met some of the cast.’

However, two years into the treatment, Eve began to decline.Meg was in Guildford when she got the call she’d been dreading.

She recalls: ‘It was 6am on June 24, 2017 and it was Beth saying: ‘I’m sorry, but Eve is really ill and you need to come home.’ I started getting ready, but half an hour later she rang again and said: ‘Eve is dying and I don’t know if you’ll get back in time.’

Thankfully, Meg did manage to get to her sister’s side.

‘She stayed alive for me,’ Meg says. ‘I walked into the house and our priests were there and they’d given her a blessing. My family were at her side and you could tell her body was shutting down.

‘Mum and Dad asked if I wanted to have a few moments alone with her and they left the room. I held Eve’s hand and told her how proud I was. The last thing I said to her was: ‘I will make sure I live this life for both of us now.’

‘Mum, Dad and Beth, three grandparents and Mum’s sister and husband, and my two cousins, who are like sisters to us, came back into the room.

‘Eve passed away at 11.33am. I will never forget the screams and cries of my family that day. Mum and Dad were broken.’

On the day of her funeral, 700 people packed the local church. ‘Everyone in Corby knew Eve and so many people wanted to say their goodbyes,’ says Meg. ‘As we drove slowly through the village, people were lining the streets.

‘But the moment that broke me was when we reached the corner of one road and Eve’s classmates were standing on the pavement. As the car came by, they all released a coloured balloon.’

Meg and Beth are now working to help siblings bereaved by cancer.

‘Beth and I were adults when Eve died, so we were old enough to understand what was going on and grieve properly, but there’s a real lack of support for younger people who lose a brother or sister and that’s something we’d like to change,’ says Meg.

‘My mum is friends with mothers who have lost children and they tell her how their other children are suffering. Some have mental health problems or are simply losing their way at school. You don’t just lose a sibling, you lose the parents you had who now always want their child back, and you lose the life you had before.’

The sisters are trying to set up a charity, Keep Smiling For Eve, to pay for support for these children and have already raised £25,000.

While Eve was alive, the sisters worked with Stand Up 2 Cancer and created a heart-wrenching short film, which was shown on Channel 4. Celebrities such as Ed Sheeran were moved to tears by it.

‘We were told the film raised so much money for research into cancer, so Eve’s legacy is going to be extraordinary,’ says Meg.

‘She’s changed me as a person. I find day-to-day life very hard. But I’m also keeping my promise to Eve to live for the day. Because you never know what is going to happen tomorrow.’