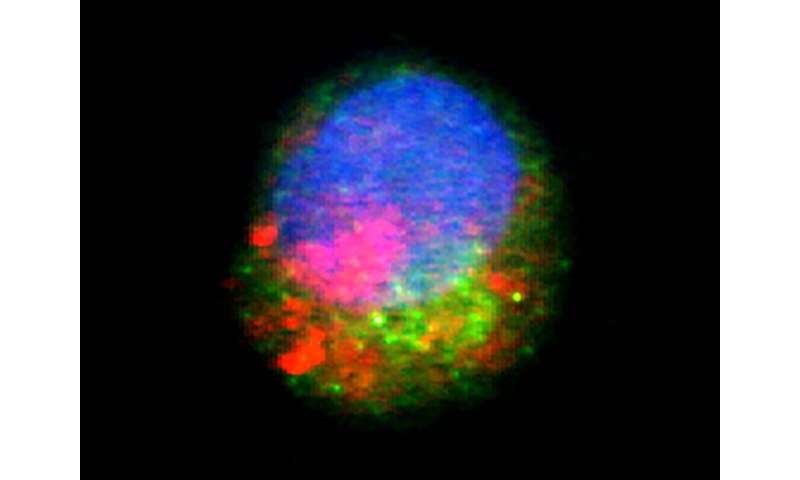 Beta-blockers are often used to treat high blood pressure and other cardiovascular diseases. However, in some patients they can trigger or exacerbate psoriasis, an inflammatory skin disease. Scientists at the University of Bonn and Freie Universität Berlin have now found a possible cause for this. Their results have been published in the journal Autophagy.

It has long been known that beta-blockers can cause severe skin inflammation. However, the cause of this phenomenon was largely unknown until now. The current study sheds light on the matter: It appears that beta-blockers can interfere with the breakdown of defective cell components. In return, the cells release messengers that trigger immune-mediated inflammatory reactions.

At least this is the direction indicated by experiments with cell cultures. The scientists took a close look at an active substance called propranolol. Regardless of the actual mode of action, i. e. the blocking of beta adrenergic receptors, its inflammatory side effects are probably due to a combination of two factors: “Propranolol is both fat-soluble and slightly alkaline,” explains Prof. Dr. Günther Weindl from the Pharmaceutical Institute at the University of Bonn.

“Recycling trash bag” in the cell

Its fat solubility enables the active substance to cross biomembranes—thin, fat-like membranes that enclose cells and some of their components. The second aspect however ensures that propranolol becomes positively charged in an acidic environment. In this state, the substance can no longer return through the membrane

This combination becomes problematic in a process experts call autophagy. Cells use bubbles from biomembranes as a kind of “recycling trash bag” in which they place defective proteins and other cell components. The bag then later fuses with a second membrane bag, the lysosome. This contains decomposing enzymes that break down the contents of the trash bag and release the individual building blocks back into the cell—perfect recycling.

The liquid in the lysosome is slightly acidic, because the enzymes can only do their work in this environment. Therefore, when a propranolol molecule randomly finds its way through the membrane into the bag, it is positively charged and trapped. Over time, this effect causes more and more propranolol to accumulate in the lysosome. “And this process apparently disrupts the autophagy,” explains Weindl. “This in turn alters a number of processes in the cell. As a result, it releases inflammatory messengers, in particular the so-called interleukin-23, which is mainly secreted by immune cells. The consequence are the observed skin problems.”

Not all beta-blockers are problematic

The researchers now hope to further investigate how exactly these processes are related at molecular level. However, their results already indicate that the inflammatory effects occur primarily with fat-soluble beta-blockers. There are in fact substances in this group that are less membrane-permeable. “We tested them in our cell cultures,” stresses the pharmacologist. “The interleukin-23 release was significantly lower than after propranolol stimulation.”