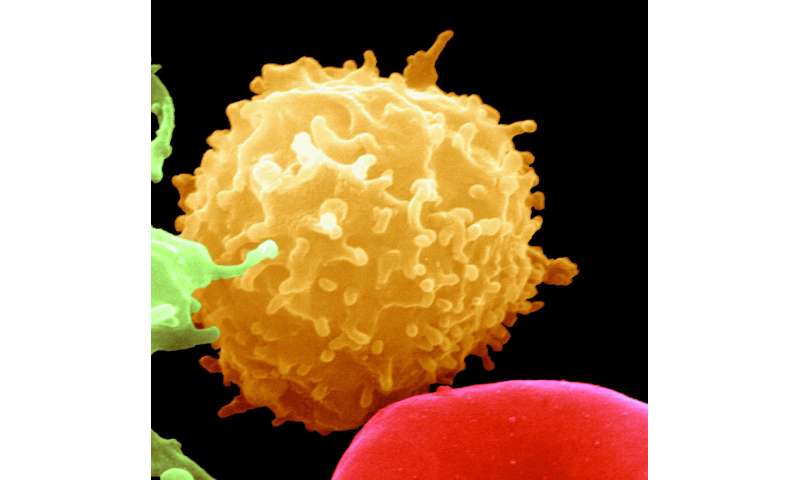 The constant battle against infectious pathogens has had a decisive influence on the human immune system over the course of our evolution. A key role in our adaptation to pathogens is played by HLA molecules. These proteins activate the immune system by presenting it with fragments of pathogens that have entered the body. People with a wide variety of different HLA proteins are thus better armed against a large number of pathogens. Researchers at the Max Planck Institute for Evolutionary Biology in Plön, together with colleagues in New York, have been investigating the diversity of HLA genes in cancer patients being treated with immune checkpoint inhibitors. This form of immunotherapy activates the body’s own immune cells to enable them to identify and eliminate tumor cells. The researchers discovered that patients with a wide variety of HLA molecules derive more benefit from this type of therapy. This means that in future, doctors may be able to offer improved individual treatment based on a patient’s HLA gene profile.

In the evolution of an organism, the characteristics which often prevail are those which increase the chances of survival and reproduction of their carrier. In contrast, for a robust immune system it could be advantageous for it to be variable, keeping as many options open as possible – a hypothesis which has been tested and confirmed in an early study carried out specifically on HLA molecules by Federica Pierini and Tobias Lenz at the Max Planck Institute for Evolutionary Biology.

It is therefore essential for the effectiveness of an immune system to have many different variants of HLA molecules, since each variant can bind to several different pathogen or cancer cell protein fragments. The more the HLA molecule variants differ, the more pathogen molecules they can present to the immune system cells. “Pathogens are constantly changing, and the immune system has to adapt to them. This leads to constant new diversity in immunity genes,” explained Tobias Lenz, of the Max Planck Institute for Evolutionary Biology.

Together with clinical researcher Timothy Chan from New York, and his colleagues, Pierini and Lenz have investigated the influence this naturally occurring HLA diversity has on the effectiveness of anti-cancer immunotherapies. When treating cancer patients with immune checkpoint inhibitors, certain proteins that reduce the immune response are themselves inhibited. Immune cells are then better able to act against the tumour cells. However, not all cancer patients respond to the same degree: some conquer the cancer completely with this therapy, for others it has virtually no effect.

The researchers have been investigating the link between the HLA diversity of patients and the success of their therapy. Their research now showed that patients with a wider variety of HLA variants respond better to the therapy and survive for longer. “A higher variability of HLA genes increases the chances of the immune system identifying the cancer cells as foreign and combating them,” explains Lenz.