Carols are chiming from shops. Coloured lights are coiled around fences. And of course, calendars are filling up with boozy parties and family gatherings.

But as the Christmas festivities appear to seize everybody in our orbit, many Australians are left feeling lonely or isolated – even when they are surrounded by people. 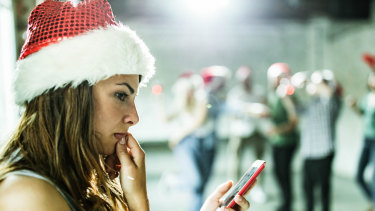 “It’s a real issue in Australian culture that Christmas has a magnifying effect and feels like a stocktake of your social and family networks,” says Beyond Blue lead clinical advisor and University of Melbourne Associate Professor Grant Blashki. “For many, it really highlights a person’s losses or disconnectedness.”

Professor Jessica Graham, an academic clinical psychologist from UNSW, says the enormous cultural pressure to have a “warm, fuzzy” experience with others at this time of year is a big trigger for loneliness.

“What happens in the holiday season is there is a conflict between people’s expectations and reality. It heightens pressure to make connections,” Professor Graham says.

“We think we should look like a holiday postcard and when that’s not how it plays out, people are very hard on themselves.”

A new survey commissioned by the Australian Red Cross found almost half of us are feeling low levels of social connection this festive season – a two-thirds jump from last year.

Of those who recalled feeling isolated or lonely last Christmas, their main reasons were being away from family or friends, feeling out of place with people around them or feeling they weren’t being invited out as much as others.

Australian Psychological Society president Ros Knight says loneliness at Christmas is on the rise in large part because it is so common year-round, with one in four Australian adults now found to be lonely.

Other factors that amplify loneliness at Christmas include seeing others’ activity on social media, idealised messaging in advertisements and the rise in travel causing families to be separated, Ms Knight says.

But whether you are feeling lonely in a crowd, or because you feel you don’t have a crowd to be in, there are things you can do that will help you.

It’s about quality, not quantity

Professor Graham’s first piece of advice is to recognise you aren’t alone in feeling this way.

Social media can fool people into thinking they’re the only one experiencing loneliness, but “a lot of people struggle at the holidays”, she says.

“It’s not about the quantity of people around you, it’s about the quality of those social connections,” she says.

“In a crowd at a work Christmas party or with extended family, not feeling mutual support can cause people to feel really lonely and down and anxious.”

Seek out the right people

At a social gathering, Professor Graham recommends thinking about who you feel interested in or want to connect with, and seek them out.

You want to minimise interacting with anyone you feel is not interested in you to ensure you’re focusing on forging connections where you can feel understood and supported, she says.

“It’s that sense of standing next to somebody and not feeling connected,” she says. “You might have a conversation about the weather but that’s as far as it goes.”

To remedy this, Ms Knight suggests going beyond your comfort zone: arm yourself with questions you can ask about a person’s life and approach somebody.

“Ask about their holiday plans, what they’re watching, try to find common values,” she says. “Showing interest in somebody else first often makes them show interest in you.”

Family conflict, a relationship breakdown or the death of a loved one can also lead to loneliness and isolation, Professor Graham says, as can working through the holidays or living apart from relatives.

She says it stems from the contrast between what you’re currently dealing with versus the romanticised version of a cosy family Christmas or nostalgic memories of past Christmases.

Professor Graham says if you’re alone during the holiday season, it’s helpful to focus on arranging high quality interactions, which means face-to-face meet-ups with somebody where there are feelings of empathy and mutual support.

“At this time of year, if you’re lonely, you can get sucked into your screens and you think you’re having social interactions,” Professor Graham says.

But while there may be a “blip” of connection from text messages and emails, “it’s a myth” that you reap any real reward from them, she says.

Professor Graham urges anyone who feels isolated not to wait for someone to reach out to them, and instead initiate a catch-up with a person they feel comfortable with, be it by doing something as simple as grabbing a coffee or heading to the dog park.

If you have exhausted all your options for reducing your loneliness at Christmas, then really it’s about “being your own best friend” and doing things you love, Ms Knight says.

“What is it you love to do at Christmas? Do you really love turkey? Go and get some,” she says. “If there’s a particular present you really wanted, spend a little bit on yourself. Being the best friend who nurtures and takes care of you can be really crucial in managing loneliness.”

Professor Blashki adds that it’s crucial for anyone who is going to be alone on December 25 not to reach the day without a plan, even if it simply means making a fun music playlist, having some good movies lined up, or drawing a bath.

He says volunteering at Christmas can also be a great way to spend quality time with others while helping people who are doing it tough.