A 29-year-old Cincinnati, Ohio, woman who had skin cancer removed from her forehead was left with a gaping hole that required plastic surgery to correct, she says.

Keri Lynn Noble was first diagnosed with basal cell carcinoma — a type of skin cancer — in 2016. Noble, a former high school cheerleader who, according to Mirror.co.uk, said she first started using tanning beds at 16, sought medical attention after noticing an “odd-looking scab on her forehead.” She later underwent a surgical procedure known as Mohs surgery to remove the cancer. Though the initial procedure was a success, the cancer returned two years later in the same area.

“I was extremely scared, as I thought the whole piece was removed and now it was back,” she told the publication.

Noble again underwent surgery to remove the skin cancer — but this time, the procedure was more invasive, requiring the surgeon to remove more layers of her skin than before. As a result, Noble was left with a gaping, reportedly golf ball-sized hole in her forehead. 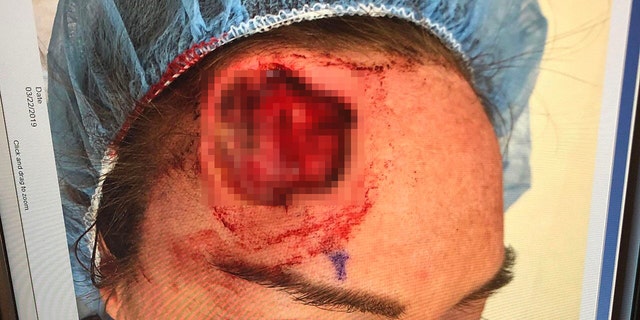 Later, she underwent plastic surgery to repair the hole. The surgeon closed it by stretching the skin from her eyebrow and connecting it with the skin on her hairline, according to Mirror.co.uk.

“They didn’t think it was even possible but he made it happen,” Noble said of the surgeon, adding he “made miracles happen.”

Noble said her eyebrows were uneven for a couple of months following the procedure but eventually evened out.

Though the news outlet reports Noble’s doctor never explicitly linked her case of skin cancer to her use of tanning beds, the 29-year-old is now extra cautious when in the sun. She allegedly said she regrets the amount of time she spent in tanning beds, explaining she did so to look "tanned in [her] uniform."

"Throughout high school, I was using the beds more and more; all the girls on the cheerleading team wanted to be tanned before the football and basketball games. After college, I went to school for dance and I was on the dance team there. As I was still in the public eye a lot, I wanted to make sure I looked like the complete package," she said. 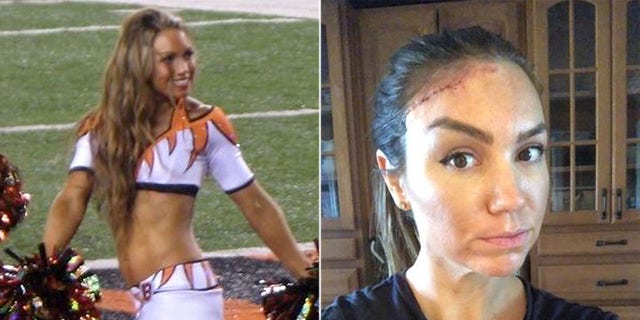 "I was a cheerleader for my high school and I always wanted to look tanned in my uniform," Noble said.
(Caters News Agency)

Now, Noble said, “I never leave the house without sunscreen and a cute hat. Everyone these days are trying to look the best they can look and [a] suntan if often associated with that.”

Skin cells are damaged when exposed to ultraviolet (UV) light, which is present in both the sun and tanning beds. In fact, according to the Skin Cancer Foundation, those who use tanning beds before the age of 35 “increase their risk for melanoma by 75 percent.”

A person’s risk of developing basal cell carcinoma, the type of cancer Noble was diagnosed with, increases by 29 percent after just one tanning bed use, per the American Academy of Dermatology.

“If we are eating healthy and keeping our bodies healthy, we need to make sure we keep our skin healthy, too,” Noble added.